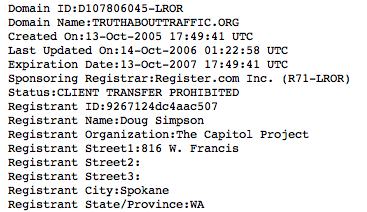 If the RTID/ST2 package fails, it will be because there’s a broad opposition that can rally support to kill it. Thus far, no such opposition has emerged. However, the Seattle P-I has been running ads online for Truth About Traffic, which seems to be a clearinghouse of sorts for various pro-road, anti-transit organizations.

All your favorite road-builders are there. They’re mostly fringe groups, including a group of San Jose-based car fetishists called the “American Dream Coalition.” Further suggesting that the site is some sort of front, it is registered to a right-wing political consultant based in Spokane.

If this represents the sum total of the opposition, it makes me even more confident that the package will pass.