If the RTID does pass sans Cross Base Highway, it will hinge on the Pierce County Council’s moves this coming week. Pierce County Exec John Ladenburg claims he has the votes to kill it, others aren’t so sure. According to the News-Tribune, here’s where things stand:

The News Tribune contacted Pierce County Council members this week to find out where they stand on the regional roads package that does not include key funding for the cross-base highway. The council would need four votes to approve the roads package and five votes to overturn a threatened veto by County Executive John Ladenburg.

Roger Bush, R-Graham: Wants to see details before making up his mind.

Three “yeas,” two-ish “nays,” and two undecideds. It’s a nail-biter! They’ll have to convince both Bush and Lee if they hope to override the veto. The three county councils will meet June 8 at 10am to vote on whether or not to even send the package to the voters. It’s possible that some councils will approve it and some won’t.

The Seattle Times’ James Vesely says this is more evidence of how fragile the RTID is going into November.

The first few lines of this article entitled “At least the return trip will be worth the price”:

State officials are now talking about a $6 round-trip toll for the proposed new Highway 520 floating bridge.

What you didn’t know was how it actually breaks down:

It’ll cost 50 cents to get into downtown Bellevue.

At least I think it’s funny. 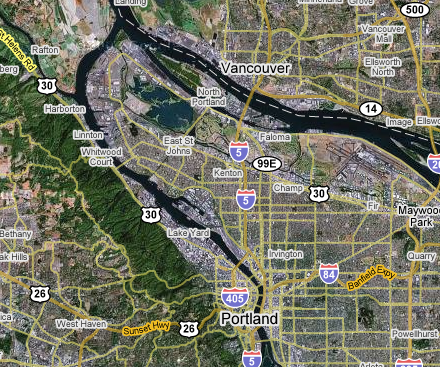 This is a bit outside the Puget Sound, but since it involves some of our most beloved transportation institutions, it’s worth a moment to take a look at what’s going on down in Vancouver, WA, Portland’s northern suburb:

The two Clark County projects are developing independently of each other. And while each watches what the other is doing, neither is bound to follow the decisions of the other and could conceivably wind up creating entirely different transportation systems.

Here’s what they’re up to:

– The Columbia River Crossing is evaluating both light rail and bus rapid transit as the mass-transit component for its new bridge. The draft environmental impact statement, expected by the end of the year, is looking at one route along the east side of Interstate 5 and another north along Main Street, both winding up at a park-and-ride lot north of 39th Street.

A final selection – on both a mass-transit mode and the whole bridge project itself – is expected in 2008. The search then begins for money, with perhaps $6 billion for the whole shebang: the new bridge, mass transit and related interchanges, bridges, overpasses and such on both sides of the river.

– The Regional Transportation Council, meanwhile, narrowed its choices to four modes – bus rapid transit, streetcar, light rail and commuter rail – and five corridors. The final RTC plan may select one mode in one corridor and an entirely different mode for another.

Certainly it’s no fun when transit systems overlap state boundaries. We’re actually lucky here in Puget Sound that our metro area is contained within a single state and only three counties. Compare that with New York, where the metro area (and transit system) spans three states and a dozen counties!

You know, you take away the cross-base highway, and RTID starts to look pretty good:

South Spokane Street Viaduct: Increases capacity by widening viaduct structure, adding one lane between I-5 and 1st Avenue South, building transit-only lanes and an off-ramp at 4th Avenue South. Adds shoulders and installs a permanent median barrier. Improves safety, freight mobility and traffic flow on the major east/west connection between I-5 and SR 99, Port of Seattle and West Seattle.

Sounds like good start of BRT to me. Let’s face it, with the monorail cancelled, West Seattle won’t be getting rail anytime soon and BRT is an important stop-gap in the mean time. I take what is a sort of BRT to work everyday.

The other big beef against RTID is that it doesn’t fix 520, but the plan they have includes a fix with a toll. Now that the narrows has a toll, there’s a precence for tolling roads in the region. Also the addition of HOV lanes and an elevated ramp to ease the 405-520 interchange will allow for better bus transit across 520. This is dear to me because I cross 520 on my commute everyday, and on the bridge the bus is with normal traffic in the same two lanes.

And as Sam pointed out in the comments, the money for the replacement of South Park Bridge is included. I guess that makes Seattle’s annexation bid for North Highline a pretty serious one.

In all, I think RTID is as good a roads proposal as is possible for Seattle-area transit.

The Highline Times thinks its possible under the new Ferry District in King County. The ferry service would be model after a passenger-only ferry between San Francisco and (I think) Tiburon.

Speaking of King County, have you seen this annexation page? Basically, the county is trying to get out of the business of running services in unincorporated areas such as Skyway, North Highline and Juanita. They have encouraged cities to look at annexing the unincorporated areas near them and want all the “urban unincorporated areas” annexed or incorporated by 2012. Recently voters in Renton voted down the annexation of East Renton Highlands, and if Renton residents don’t want the affluent Highlands, what makes anyone think that they will successfully annex Skyway?

Meanwhile, Seattle and Burien are fighting it out over North Highline, also known as White Center. Seattle wants to annex it but some people in the city wonder if it offers any advantage to Seattle. Burien wants to annex part of it, but since Seattle is willing to get the whole thing, they are unable to officially take that stance. The problem for Burien is that North Highline’s 32,400 people are about as many as Burien’s 34,000 and would create a $3.5 million loss on a $15 million budget for Burien, that’s with a sales tax sharing from the state for 10 years (Cities over 400,000 people, of which Seattle is the only one, are not eligible for the sales tax sharing from the state.). For Seattle, the area would cost about $4.6 million out of a total budget of close to $2 billion.

In Burien, the vast majority of the population is against annexation, in Seattle no body really seems to care much one way or another. In North Highline, their is a mild majority tilting toward Burien. They will be the people who ultimately decide. To make the whole thing more complicated, there’s the whole issue of who will pay for the replacement of the South Park Bridge which is set to fail to pieces any day now. Neither city wants to pay for the $70 million it’ll cost to replace the bridge. It’ll be weird to see how things play out on this and the other annexations. There is a growing movement in Tacoma to expand/bring back their streetcar system. I don’t know enough about Tacoma to know whether it is something useful, but if ST2 brings Link all the way to Tacoma, you could imagine this being pretty useful.

Want to see what Seattle will look like in three years, after all these condos go up? Click here for a flash animation fly-over. It’s pretty neat. It even includes the new Gates Foundation headquarters in Lower Queen Anne.

The PI reports that RTID’s executive committee voted 6-1 to move a version of the bill forward to a planning committee. The version they are considering is without the “cross-base highway” that has a lot of greens upset. The rub is that Pierce County Executive and Sound Transit Chairman John Ladenburg has threatened to veto any version of the RTID that did not include the cross-base highway. This is important because the new Sound Transit package, ST2, will be co-billed with RTID, so we won’t get our transit package if a majority of voters in King, Pierce and Snohomish counties don’t approve the bill.

Meanwhile, WashPirg, which has come out against RTID/ST2 in part because of the crossbase highway may come around on the new RTID/ST2 package as Bill LaBorde, state director for WashPIRG said:

“Happy enough” is a good way to put it. Bad stuff remains on the RTID project list but, in addition, to removing Cross-Base, we feel that the new policy language in the RTID plan gives us a foothold to change the way several of the RTID projects are ultimately built out and operated in the future. I guess the best way to put it is we’re now at a point where the good of adding 50 miles of light rail has begun to outweigh the potential harm from the RTID projects.