No seriously. The Port of Seattle has sent me a mail touting the “sustainable project” that is the $413 million parking garage near Sea-Tac:

In mid-May, the Port of Seattle Commission gave final approval for the construction of a consolidated Rental Car Facility (RCF) adjacent to Sea-Tac Airport.
…
10,000 to 14,000 Vehicles Processed Each Day
Don’t think of the RCF as a parking garage. Instead, think of it as a processing facility with 10,000 to 14,000 vehicles entering and leaving each day.
…

A Sustainable Project
The RCF is the very first sustainable demonstration project and sustainable asset management pilot project for the Airport, meaning it is designed to be built and operated in as economically and environmentally advanced manner as possible. Key attributes include:

We are proud that construction of the Consolidated Rental Car Facility will begin in the coming weeks. The amount of detailed planning that has gone into the RCF is nothing short of extraordinary and I am confident the state-of-the art facility will be embraced by both the rental car industry and its customers. I also believe that the RCF will become a source of pride for the region, a signature landmark for the City of SeaTac and set the bar for what truly represents a sustainable rental car facility.

For the record, I dislike this project because it costs $413 million. I don’t care about the parking garage itself; if it were free I wouldn’t think twice. And I don’t mean to belittle the seemingly earnest attempt to make the project as environmentally friendly as possible, but nonsense about sustainable parking garages comes off as kind of hilarious.

For an agency that gets $40 million each year in public money, and essentially runs a monopoly on our region’s air transportation, I don’t think this a good way to spend its money. For comparison, the portion of link from Tukwila International Boulevard to the Airport (including the station) cost $145 million. There’s action in Congress to pour $14 billion into improving the tracks between New York and Washington, reducing the travel time from 2:45 to under 2 hours. Hooray for that.

It’s still early going, of course. Besides budget-cutting zeal and NIMBYs, there are two big things to worry about. First, stations may be added for political reasons, defeating the “express train” concept:

The Wilmington [Delaware] station is Amtrak’s 11th-busiest in the nation, so Castle said he would “fight like heck” to make sure any high-speed trains stopped here.

I won’t comment on Wilmington specifically, but we can expect to see this kind of thing all along the line.

Secondly, they’re looking for a public-private partnership. Now, I’m not ideologically opposed to this kind of thing if it gets projects done. But if one of Amtrak’s few profitable routes gets cannibalized by a private operator, that can only hurt service elsewhere in the nation.

I imagine that most readers have seen these charts on Orphan Road that bgtothen has put together of the ridership of bus routes operated by Metro (includes Sound Transit routes within King County, as those are operated by Metro). They are awesome and I appreciate tremendously bgtothen putting them together.

The data is great. I meant to post on this before, but I didn’t have much to add to the discussion until I read the last sentance:

One last point. The highest ridership route for the Eastside is the 550 at 19th place. The highest none UW/CBD to Eastside route is the 230 at 29th place. Pretty pitiful. This just goes to show how much wealth and sprawl kill transit.

There’s really no argument about density and transit (more density, more ridership) but the 550 route is less than ten years old (the same goes for all 5XX routes), while the single digit bus routes are ancient, and most of the double digit metro routes are old too. A brand-new service in Seattle might have low ridership as well, give those routes a little bit of time: transit also leads to density as well as getting riders off of it.

These routes lead directly into a question about sub-area equity. Why are Sound Transit and Metro wasting their money running buses in the suburbs when the buses in the city are a way better deal per dollar? The answer is because those in the burbs are paying for those buses. They deserve something for their tax dollars, and even at 10 riders per service hour, that’s cheaper for society than those riders driving. 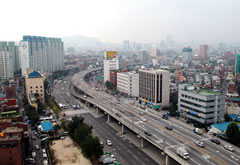 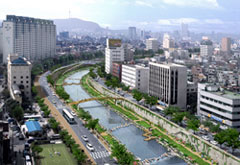 I’m not sure what they put in the water in Seoul, South Korea, but it seems to be doing wonders for the Seattle Times’ James Vesely:

With about 70,000 workers, day and night, 24/7, the people of Korea tore down their old viaduct and installed an ancient river, pushing about 120,000 tons of water a day through miles of the city.

Gone are the slums, back are the ducks. Gone is the rule of traffic above the shops and in its place, the riverwalk of all riverwalks, miles and miles in a straight line to the sea — a grand canal called Cheong Gye Cheon.

How did they do it?

In-ken Lee, director-general of urban planning, led the project under the mayor’s supervision. Lee remembers the time as a coming together of the city, with notorious negotiations with some 4,000 shopkeepers who wanted the viaduct to remain.

“We met every week with the mayor to discuss progress,” Lee said in an interview this past Tuesday. “Every Sunday morning, 8 a.m. to 10 a.m.”

Indeed. Commitment means sticking to a vision and executing on it. Interesting, then, that just weeks ago a glum, dejected Vesely was calling for a retrofit of the Seattle viaduct on the grounds that he was tired of all the bickering and cajoling (you know, the stuff they call “politics”).

Maybe the Seoul smog did him some good, and he’ll return to Seattle with a renewed sense of commitment. 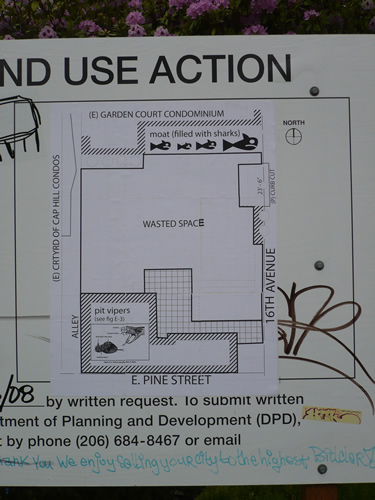