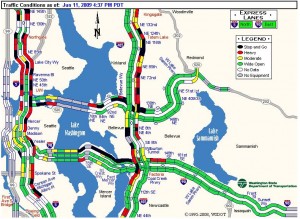 Last session’s legislative attack on the I-90 two-way HOV project has been discussed mainly as an attack on East Link, and it was.  Nevertheless, it’s useful to remember on days like today that “reverse-peak” HOV capacity is critical to the flow of buses and carpools.

There weren’t really any accidents or anything today; it was just run-of-mill congestion on a sunny Thursday afternoon.

Edit from Ben: I can’t say it was really run-of-the-mill. I got on the 545 at Overlake around quarter after 6, and didn’t make it to Denny and Stewart until nearly 7:45. An extra hour lost. Yesterday was the same way – exceptionally nasty.

Edit from Martin: I was referring to I-90, not 520, and the point was that there wasn’t some massive wreck or other cause of delay.  I believe my point stands.