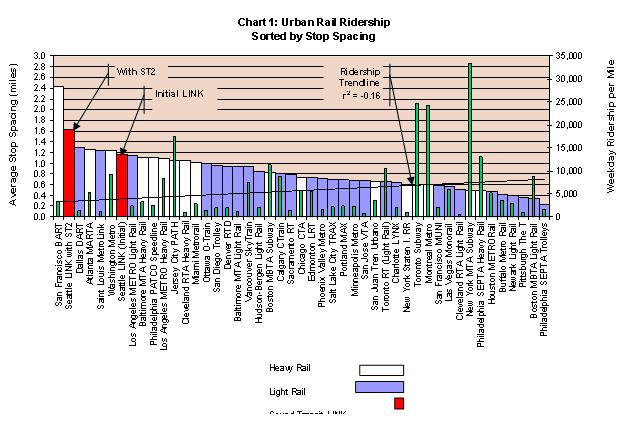 I developed a matrix for all North American urban rail systems, light rail and heavy rail, including info such as system length, stop spacing, average speed and City population. This post explores the implications from this matrix for Sound Transit’s Link light rail system.

Link light rail, both the initial segment and the Sound Transit 2 (ST2) expansion, has been designed for high capacity and with lots of grade separation. These characteristics have led some to classify Link as metro-light. As shown in the two charts below, its stops are widely spaced and the average speed is high compared to other systems. In fact, only San Francisco’s BART has stop spacing wider than Link with ST2. Based on the advertised travel times for ST2 expansions, Link with ST2 will be the fifth fastest system in North America. The Link system has the characteristics of a system designed to be competitive with automobiles around a large region. Will these characteristics lead to success in terms of high ridership?  More after the jump.

In Chart 1 the average stop spacing of all North American urban rail systems is shown, sorted from left to right. The stop spacing columns are blue for light rail, white for heavy rail, and Sound Transit is highlighted in red (for cities with multiple systems, each is shown separately). The narrow green bars are the ridership for each system, normalized by “ridership per mile.” Note that several high ridership systems are on the right side of the chart, with stop spacing around one half-mile. The correlation between stop spacing and ridership is negative and weak (r2 value of -0.16). This means that the stop spacing and ridership are only loosely connected, and if anything shorter stop spacing trends towards higher ridership.

In Chart 2 the average system speed for the same urban rail systems is shown, sorted fastest to slowest from left to right. The highest ridership systems are scattered across the spectrum from faster to slower speeds. The correlation between average speed and ridership is trivial and negative (r2 value of -0.10). 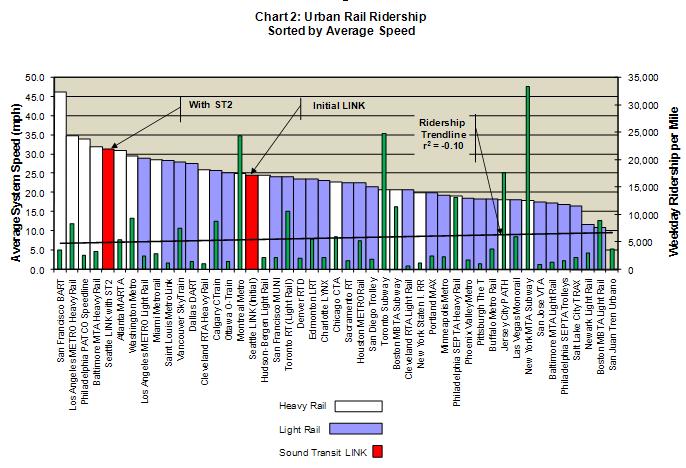 Among all the characteristics compared in the matrix, the factors most correlated with ridership per mile are City population and population density. Average speed and stop spacing have very limited correlation to ridership. Based on this analysis it appears that adding infill stops to Sound Transit Link (shorter stop spacing) would not hurt ridership, even if it results in lower average speeds, and if anything could slightly help. Shorter stop spacing would allow more people to access more destinations within the same number of system miles, and hence increase the ridership per mile.

90 Replies to “Link Light Rail in the North American Context”