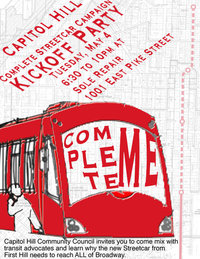 Hot on the heels of the City Council approving the First Hill Streetcar line, the Capitol Hill Community Council’s Complete Streetcar Campaign (a group I’ve personally been involved with) is holding a kickoff party Tuesday evening to gather support and spread the word about efforts to extend the line further north and re-envision the Broadway streetscape.

More information is available on Facebook. See you there!