Metro and Sound Transit conducted a targeted rider survey immediately before and after the February 6, 2010 service change. There were a number of findings, some interesting, some not-so-interesting, and some deeply flawed.

Most interesting were the Link-only questions. Ridership has increased substantially since February, partially due to people new to transit, so these numbers may not still apply.

How did you pay? 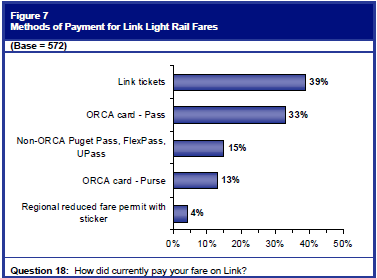 How did you get to the Link station? “Other” is huge, but the bike share is tiny. 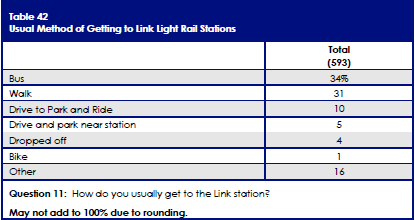 What did you do before you rode Link? These numbers add up to well below 100%, so I believe non-responses are included in the computation. In February about half of Link riders came over from the bus.

Some other findings below the jump.

There’s going to be a lot of temptation to jump to conclusions from this data in the service of refighting old battles, in spite of all the reasons to be wary of it. And to be honest I’m disappointed that the last result was even close, as that doesn’t fit with my own perceptions. Nevertheless, I think the constructive comment to come out of this is that transferring to and from Link is perceived as too hard. Part of that is fare policies, part of it is poor transfer point design, part of it is the inherent complexity of intermodal transfers.

* Furthermore, as far as I can tell, the Link sample includes people on trips other than Downtown/Seatac; I have no idea what that does to the results. It also includes people who didn’t take the bus, and may have a totally different frame of reference for what is acceptable.