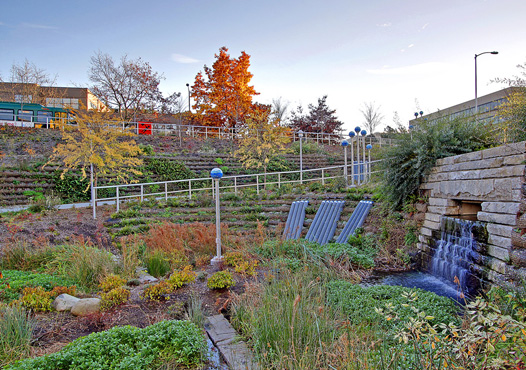 In his letter to Seattle Department of Planning and Development Head Diane Sugimura about the Roosevelt Station Area up-zone, Mayor Mike McGinn said the city should ‘take towers “off the table”’ but that ‘the city needs to take a closer look at heights above 40 feet, such as 65 and 85 feet’. I am confident 85 or even 65 feet is completely workable, and it is possible at those heights to create the sort of neighborhoods that would allow Seattle residents to get their money’s worth from the light rail station. To find examples of sufficiently dense neighborhoods at that zoning, we don’t even need to go to Paris or New York, we can look right here in Seattle.

Reasons below the fold.

It is possible to get a serious amount of density with fairly modest heights. Writing over at the Atlantic, Kaid Benfield praised the Thornton Creek project just south of Northgate Mall on NE 103rd and 5th NE. I recommend reading the entire piece, but when reading about that project what jumped out at me is this:

96 units per acre is right in the range that the Sierra Club has called “efficient urban”. At 100 units per acre are the “Russian, Nob and Telegraph Hills, and North Beach in San Francisco, River North in Chicago, Beacon Hill in Boston, along Connecticut Ave. in DC”. While not the most dense neighborhoods in the country, these areas are certainly urban and dense.  100 units per acre is 153,000 people per square mile – or three times as dense as Manhattan or Paris. Of course I understand that is without streets, but the Thornton Creek project includes both commercial space and open space, as well as a plaza.

Outside of the Cinema – which has no housing and is the only portion of the development zoned for NC 125′ –  no one going to Thornton Creek is likely to feel like the development is over bearing or out of scale. In fact, almost half of the area is “green space”, something most people want more of in their neighborhoods. And because Thornton Creek has the Cinema, the plaza and all of the commercial space, similar zoning in Roosevelt could accommodate even more residential and commercial density as well as open space while staying within most Seattle’s idea of reasonable density.

The obvious rejoinder to this argument seems to be “Well, if 85 feet can easily you 100 units per acre, then 170 feet can easily get you 200 units per acre.” While this might seem correct, there is no place in the city that this is happening. The Yesler Terrace redevelopment project is going to include residential buildings as tall as 240 feet and office buildings as tall as 300 feet, but will only have 5000 units in 28 acres, or about 178 units per acre. Both projects have a similar ratio of open space (20%) and commercial use.

Dense development is obviously hugely important to making transit successful. My only point here is that we do not need to build high-rises everywhere to achieve that density. Let’s continue to push the City Council and the Mayor to increase the amount of development allowed near all current and future light rail stations in the City. But let’s not get hung up on how tall the developments are allowed to be; let’s focus instead on how intense they can be.

71 Replies to “Opinion: For Roosevelt, 85 Feet is Plenty”