One fator that often brings down the livelyness of a city is dead, empty buildings or vacant lots.  Sometimes this happens because an owner is waiting for the right market to sell, or because of some legal issue that’s being worked out.  There are many blocks near my office with no street life despite being in a dense part of the city.  Let’s take a look at one of them:

This is the “﻿Federal Reserve Bank of San Francisco – Seattle Branch.”  Or was.  Until our government decided they could save money by moving out to the suburbs and selling this high-value property downtown.  And in 2008 they did just that.  Except they didn’t follow their own process and perform an Environmental Impact Statement before they sold it, so they were sued (perhaps by the neighbors across the street) and in 2010 a federal judge told them they didn’t actually sell it and they still own it.  So what was potentially going to be a large new skyscraper is now an empty mass of concrete.

For the past three years this building has sat, in a high value area in the middle of the city, empty.  It’s very short for the area, has no retail or useful street activation, and has been rejected by the Seattle Landmarks Preservation Board as a landmark.

It’s true that this building added little life to the street even when it was functioning.  And this is just one building.  But add together enough of these dead blocks, and it can harm the city.

Just so everyone doesn’t forget today is the first of three public hearing around King County on the proposed Congestion Reduction Charge (CRC). Yesterday Metro released more detailed maps of service cuts, reductions or revisions if the CRC is not passed by the council or approved by the voters. From Sherwin’s post a last week.

Those of you bursting with feedback on Metro cuts more than our blog comments can handle will be given an opportunity live in-person with three upcoming public hearings held by the county council’s Transportation, Economy and Environment Committee:

If you’re more technologically inclined, you have the option of submitting written comments, but I tend to believe that verbal testimonies have an impact that written words don’t. More of our coverage on the Metro cuts here, here, here, here, and here.

The data isn’t online, but the Metro press release claims Vanpool boardings are up a staggering 29% on last year and singles out RapidRide A as producing a “one-third” increase over the last 12 months. 2011 system ridership is up by 2.4% over the same period last year.

Metro credits a gas price increase of 31% and employment growth of 2.6% as driving increased demand for transit.

If you ride a Metro bus at night you’re probably familiar with the “front door exit only after 7 pm” rule. It states that “after 7 p.m., for extra evening security, board and exit buses via front doors only.” Metro calls it a safety feature and a way to cut down on fare evasion. CORRECTION: Pittsburgh does this. They have a downtown Ride Free Area in effect until 7 pm like us. This is a rule unique to King County Metro. I have not yet found another major metropolitan transit agency in North America that does this Most major cities don’t do this and for good reason, because the cost of delay caused by forcing everyone to exit through the front door outweighs the security and revenue protection benefits.

The rule is now effectively rescinded after a Metro bus driver was assaulted last year for not letting more people out the back door. There is no longer any mention of the front door only rule in The Book, Metro’s transit operator manual. Section 6.19 (Ride-Free Area) and 6.20 (Fare Collection and Loading Procedures) tell drivers that “customers may exit through either door.” Metro spokesperson Linda Thielke confirmed to me that “bus drivers do have the option to open the rear door to allow passengers to exit the coach during [7 pm – 6 am]”. Meanwhile, signs on the rear door, inside and outside, continue to say “Use Front Door Only 7 PM – 6 AM”, even on RapidRide buses.

END_OF_DOCUMENT_TOKEN_TO_BE_REPLACED

Things won’t exactly be getting back to a normal weekday tomorrow as the Lions Clubs International’s Parade of Nations is expected to bring thousands out to downtown streets for what is supposed to be Seattle’s largest parade ever.  Our advice, of course, is to be sure that you’re aware of the many reroutes downtown and delays that usually accompany them.  Driving as an alternative is definitely not recommended.

Slow, often overloaded, and seemingly always late, Metro Route 16 is nevertheless one of the workhorses of north-central Seattle. Starting downtown, heading through Queen Anne to Fremont via Aurora Ave, thence to Wallingford, Greenlake, North Seattle Community College and Northgate, it connects lots of dense neighborhoods and transit destinations. Its roots go back a long way: streetcar service circled Green Lake and connected to downtown via the Fremont streecar bridge, and frequent service has existed on Aurora since the construction of the Aurora Bridge. The 16 was interlined with what was then route 6, the predecessor of today’s 358.

According to some Metro planners I chatted with, Route 16 formerly ran out of a bus base, known as North Base, which was located on the east side of what is now the Seattle Center. It was presumably convenient to route the bus past this base, which explains the first oddity on the map above: rather than run straight up Aurora like today’s 5 and 358, the bus serves the stops on 5th Ave N, which, in the northbound direction, requires a stopless loop-like detour of just over a mile and roughly five minutes when traffic is moving freely. This detour is actually much worse than it looks on the map: due to the construction work on Mercer, that road is congested most days and is invariably a parking lot during the afternoon commute. This sitation is going to persist for years, and if the Mercer West project is funded, the construction disruption will probably get worse before it gets better.

Let’s look more carefully at the consequences of this detour on travel times and reliability. The following graph, generated from Metro’s official timepoint data, plots the average measured travel times for routes 5 and 16 throughout the day, between 3rd & Union (Route 16) or 3rd & Pine (Route 5) and Fremont Way and N 38th St. Error bars indicate the standard deviation of the measured travel times, a statistical measure of the variability of those times, and hence the of the bus’s reliability. Chart below the jump.

END_OF_DOCUMENT_TOKEN_TO_BE_REPLACED

Union Pacific Railroad shows off its track renewal train and group of workers. No other industry in America is as capital intensive as the railroads.

And there is its European counterpart in HD.

It’s not even on STB, and this one requires a little context. Dominic Holden on Slog links to Adam’s last tunnel post, titling the post “How to Piss Off the Transit Community.” Which triggered procupcake’s snide remark:

Transit community? Is that referring to anyone who transits? Ho hum. Next thing you know, the transit community will want representation and marriage equality, but I digress…

But that’s not the winner. It’s MacCrocodile’s response:

It had me giggling for a good five minutes. 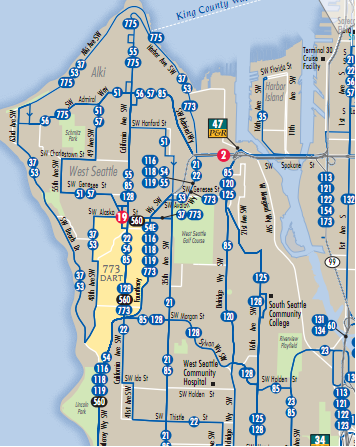 RapidRide C is coming to West Seattle next year, and as with the first two lines Metro will schedule a service restructure to occur at the same time. County transportation advisor Chris Arkills told me that the process will begin this Fall.

I thought about putting together another service restructure proposal as I did for the Rainier Valley (twice) and Zach did for Capitol Hill, but it occurred to me that I don’t actually know anything about West Seattle. So instead, consider this the thread to make your case for how service should change. If there are good ideas I might synthesize them into a coherent proposal.

Not every comment has to be a fully accounted plan. However, here are some useful principles and other thoughts:

I have no idea what Metro is going to propose this fall, but it can’t hurt to let them know that there’s support in the community for bold change.

Those of you bursting with feedback on Metro cuts more than our blog comments can handle will be given an opportunity live in-person with three upcoming public hearings held by the county council’s Transportation, Economy and Environment Committee:

If you’re more technologically inclined, you have the option of submitting written comments, but I tend to believe that verbal testimonies have an impact that written words don’t.  More of our coverage on the Metro cuts here, here, here, here, and here.

This is pretty cool:

The video was made by Herrenknecht Tunnelling Systems USA, and posted to Youtube by Sound Transit.

Riders who frequent the downtown transit tunnel (DSTT) during peak hours are commonly prone to lapses of frustration and impatience when a slow crawl of buses often lead to increased travel times, and even missed transfers.  A lot of what affects joint operations and just tunnel bus operations in general is the placement of the bus bays.