I think Sherwin’s piece rightfully complained about the commercial environment on 3rd Avenue; no one can argue that payday loans and smoke shops make for an attractive streetscape.  But to counter Sherwin, I don’t think that adding a more desirable slate of businesses (as if one could just do so by fiat) would fix what is an undoubtedly structural problem.  Fixing the shops is fine, but it doesn’t fix the shoppers.  We have a huge number of workers, tourists, the homeless, and a small number of the condo-owning elite.  Missing are the middle-income folks so common to all our other neighborhoods:  hipsters, students, immigrants, and families with kids.

In my opinion, downtown’s problem is most easily seen by looking at income inequality. Not enough people live downtown, and we have made it largely illegal to develop residential space downtown (most new construction is in Belltown/Denny Triangle/SLU). As a result we have encouraged housing policies that are doubly exclusionary – where the middle and upper-middle classes are excluded by both the very rich (due to the economics of new construction) and the very poor (due to government support for deeply subsidized housing and centrally-located homeless shelters).

Now some data.  One quick and easy way to measure income inequality is to divide mean household income by median household income and look for positive skew (>1.0), indicating that a small number of very high incomes distort the otherwise representative value of the mean. 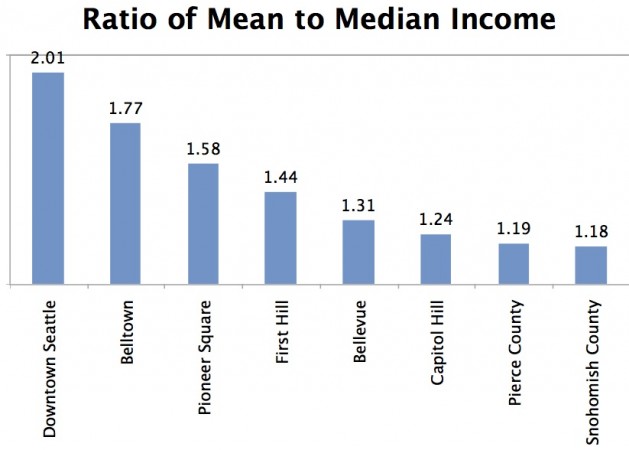 Central neighborhoods (Downtown, Belltown, Pioneer Square) really stand out for their inequality.  Downtown, Belltown, and First Hill are rich and unequal.  Pioneer Square is poor and unequal.  Bellevue, by virtue of its general lack of poverty, is rich and equal.  The most livable neighborhoods in this limited analysis, Capitol Hill* and the suburban counties, are middle-class and relatively equal.  (*Capitol Hill is becoming more exclusive every day, and this data only captures the more affordable portion of Capitol Hill bounded by Aloha, Pine, I-5, and Broadway. )

Downtown Seattle is an economic powerhouse.  We have more than a quarter million jobs downtown, the most of any Central Business District for 1,000 miles.  We have fantastic amenities for tourists, arts patrons, foodies, and sports fans. From downtown, almost any location within a 3-county area is reachable via a one-seat ride on buses, ferries, and rail.  But what we don’t have is nearly enough housing and the attendant business housing brings:  hardware, groceries, daily necessities.

What’s more, downtown rents command a 50% premium over competing neighborhoods like Capitol Hill, even without the wealth of urban amenities that make those other neighborhoods generally superior places to live.  In addition to the linked combination of wealth and destitution, there is a certain inertia to downtown rents that resists market pressures.  Developers can add, say, 10% of the cost in high-end finishes and easily charge more than that as a premium.  These hurdles to affordability are intractable.

So what to do?  I want to push back against the notion – pushed by some fellow STB bloggers, Ryan Avent, Matthew Yglesias, etc… – that we can build our way to affordability.  I’d argue that demand is so robust, downtown space so precious and limited, and the availability of high-income imports so strong, that we just can’t build enough to make the city cheaper.  (Even if we tried, Shoreline, Lynnwood, Covington, et al…would still always be relatively more affordable).  The only way to make downtown more livable is to make it richer and infuse it with permanent residential growth.  We should build whatever the market can take, accept the high-end rents and sale prices that entails (I personally couldn’t afford to live downtown), and let our vast single-family neighborhoods upzone modestly to absorb the new middle classes that our world-class downtown will sadly (but necessarily) exclude.

I reluctantly argue for outright gentrification, despite its social costs, only because the alternative (sprawl, greenfield development, flight of talent and capital away from the city) is even worse.  The social costs of institutionalized poverty and lack of housing supply simply exceed those caused by gentrification, and it is the proper role of government to mitigate those social costs, NOT through the artificial restriction of housing supply but rather through the provision of enough subsidized housing.

I’m not arguing for mass teardowns of historic buildings, or high rises everywhere.  What I’d like to see are more mixed residential-commercial properties, select teardowns (parking garages/surface lots, single-story structures, single-use buildings (post office etc) and renovations of blighted properties. If we don’t take these new arrivals, the suburbs will.  We need their talent, creativity, incomes, and the life they will bring to our city. Downtown’s future will be bright if we let it be, but it will be a rich future.  Despite the misgivings of our progressive consciences, isn’t a rich future better than a poor one?