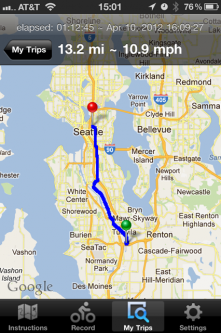 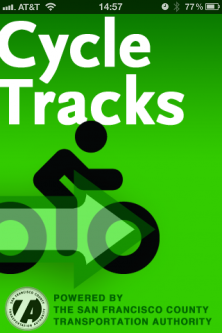 PSRC wants to know where and why Puget Sound bicyclists ride, and they have partnered with Bay Area smartphone app Cycle Tracks to allow bicyclists to record their trips and share their data directly with PSRC. The data will help prioritize present and future investments in bicycle infrastructure and will improve the ability of planners to model cycling demand variables such as slope, arterial speed, presence or absence of bike lanes, etc…

Cyclists may start using the app anytime, while PSRC will begin collecting data on May 1.  The app is available only for iPhone (download) and Android (download).  The app asks for your age, email, gender, home/work/school ZIP, and cycling frequency, but all of these inputs are voluntary.  For the purpose of grouping trips by user, the app does require your Unique Device Identifier, but this data will not be shared.

I have been testing out the app for the past week, and it has a generally pleasant user interface and its basic functions work well.  Trips are saved by date and trip purpose, all trips are mapped, and average speed is given. Other apps such as SpeedTracker provide more information, such as color-coding your map by speed so you can see your bottlenecks. There are some unfortunate quirks, such as the app only being able to run on an active (though dimmed) screen (i.e. you can’t press the top button on an iPhone or this will stop the trip from being recorded)  Using CycleTracks on my 13-mile bike commute drains about 35% of the battery.

Overall, this app represents a nice chance for cyclists to allow their own travel preferences to directly impact how planners understand cycling.  An app FAQ is here, and questions can be referred to Peter Schmiedeskamp, pschmiedeskamp@psrc.org.