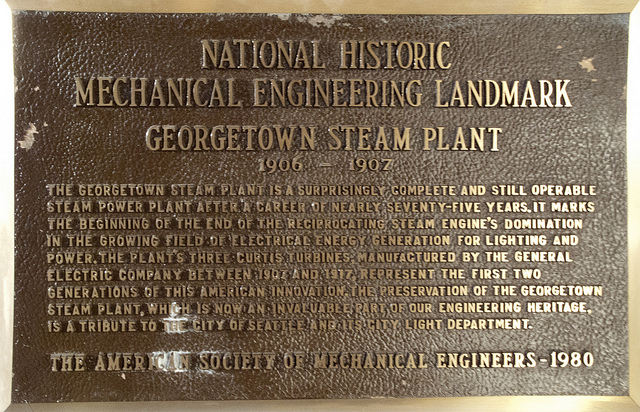 On Sunday, May 6th, transit enthusiast Heather McAuliffe, and Metro planner Ted Day, are hosting a bus tour of and the Georgetown Steam Plant. This event is designed to introduce new riders to transit, showing them that transit can be easy to use, and take them to interesting and fun places around the city. Everybody is welcome, including families with kids, and the only cost is bus fare for one or two Metro bus trips.

The itinerary is as follows:

The Georgetown Steam Plant is one of Seattle’s hidden gems of industrial history. From Wikipedia:

The plant was originally built by Stone and Webster in 1906. One of the first reinforced concrete structures on the U.S. West Coast, it originally provided power for the Interurban Railway between Seattle and Tacoma; it also provided both direct current for Seattle’s streetcars and alternating current for Georgetown, then an independent city. They purchased General Electric steam turbine technology, based on patents originally held by inventor Charles Curtis. At the time, this was cutting edge technology, and the Georgetown Steam Plant “marks the beginning of the end of the reciprocating steam engine” as the dominant mode of generating electricity on a large scale.

RSVP isn’t required, but if you plan to attend, it would be helpful to say so in the comments, to get some idea of the level of interest. Please forward this to anyone you know who might enjoy such a tour — especially if they don’t currently use transit.

18 Replies to “May 6th: Bus Sightseeing and Steam Plant Tour”