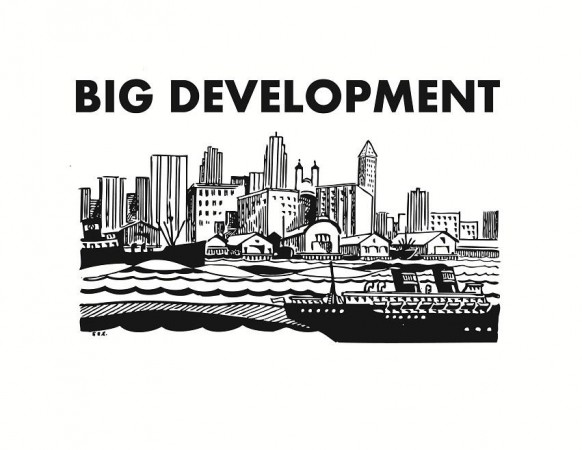 Tomorrow evening is the second installation of the City Builder Happy Hour. Like at the first event, the hosts want to hear about people’s “audacious ideas” to support more growth and sustainable development in Seattle. Last time it was the idea of a gondola from Capitol Hill to Seattle Center. This time you are invited to send your idea in on the back of cocktail napkin. I’m going to put my ideas here, in this post, instead.

When I last wrote about the happy hour, I talked about the “myth of Big Development,” and somebody has done a great job of running with that idea, creating a great visual image. I’m still withholding judgment about whether a happy hour is going to get us where we need to go. “What could it hurt?” you ask.

In my opinion, we’re rapidly approaching the time when doing nothing but talking about things is going to be harmful, even if we have a few beers while we’re doing it. I’ve about had it with meetings, however well intentioned, that don’t lead to creating the political momentum behind the ideas that will fundamentally change our approach to land use in Seattle. Having said all that, here are some “audacious ideas,” parts of which I’ve shared before.

Zero Based Zoning—throw out the code around transit stations, and solicit development proposals from developers, landowners, neighborhoods, and transit and land use activists. Draft some general guidelines, have the Planning Commission review the proposals and permit the proposal that meets the goals of sustainable, transit oriented development.

Redefine Affordability—our current quantitative measure of affordability—30 percent of monthly income discounted for some percentage of Area Median Income—is arbitrary standard that is not up to the task of addressing the underlying concerns of making it easier to live in the city.

Citywide Transfer of Development Rights (TDR)—the idea here is that if we want to save the Bauhaus block and leave it just like is, then the City should buy the development rights from the property owner and sell those rights elsewhere, in a place where additional height makes financial sense. This could extend to more than just historic buildings, but buildings that have some constituency wanting to stop development one place but willing to support more density elsewhere.

Neighborhood Real Estate Investment Trusts (REITs)—the idea of a REIT is to allow investors to buy shares of real estate rather than the land itself. The beauty of a REIT is that shares are easily bought and sold, and their value increases as the value of the property does. I would propose that Historic Seattle or some other local Public Development Authority to develop this idea so that local neighborhoods could pool their money to become investors in real estate in their own neighborhoods.

This last idea would actually allow neighbors or anyone else with a small amount of money but a passion for shaping development, to actually buy up pieces of property. It’s a market based solution that would give neighbors a sense of why return on investment is tied to improving the value of land. And, as a socially responsible investment, a Neighborhood REIT could, in the case of the Bauhaus block, actually decide to lower the return on the investment in the form of cash, in favor of keeping the more intangible return of preserving the building.

REITs generally need lots of money to be fully capitalized, and they are highly regulated by the Securities and Exchange Commission. But the REIT model—pooling cash investment from multiple sources to acquire property—has been used in Great Britain to some positive effect to preserve, redevelop, and operate properties that would otherwise not be usable or would end up being too expensive.

There you have them, some audacious ideas. Let’s see what the City Builder Happy Hour can do to make these, or any other ideas, a reality.

10 Replies to “Will Beer and Big Ideas Lead to ‘Big Development’?”