Perhaps the most pressing concern about the September elimination of the Ride Free Area (RFA) is the likelihood of severely degraded peak-hour travel times within the Downtown Seattle Transit Tunnel. Without significant mitigation, the already precarious mixed bus-rail operations of the DSTT are certain to get much worse.  Of particular concern are northbound trips in the PM peak, as each crush-loaded departure (particularly to Northgate and the UDistrict) will require at least an additional minute of platform time to accommodate fare payment, in addition to the mandatory and time-consuming inspection that each Link train makes before proceeding from Westlake to the Pine Street Stub. 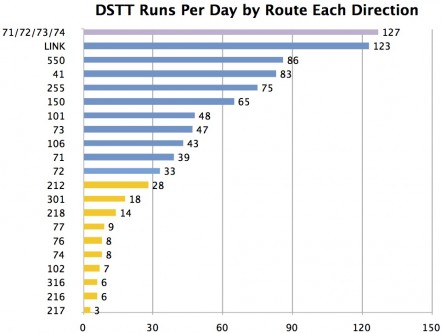 The DSTT currently operates approximately 1,500 trips per day, 750 in each direction. Median overall headway is every 3 minutes in the morning and evening, every 30-60 seconds in the peak, and every 2 minutes mid-day. This offers impressive capacity but – like closely stacked dominoes – precious little room for error. Bus and train breakdowns, cash fares, overly discursive drivers and passengers, overly restrictive train/bus separation requirements, and wheelchair/bike accommodation, can and do cause cascading delays whose magnitude is far greater than the sum of the individual behaviors.

In the absence of instituting proof-of-payment (POP) in the DSTT, it is clear to me that the transition to Pay-as-You-Enter will require reducing overall tunnel bus frequencies in order to avoid a total breakdown of service reliability.  Thankfully our agencies are able to “tunnel” or “surface” routes with far less public process than is normally required when a service change is being considered. As someone who commutes from Convention Place to Tukwila every day – in which my mornings are a reliable 30-minute breeze and my afternoons a variable 50-minute headache – I’ve spent a good deal of time thinking in big-picture terms about the proper role of the DSTT in our regional transit system. Below are 5 principles – roughly in order of importance –that I offer as one model for determining which routes to keep underground.

What would the DSTT look like under these principles? And would it solve the capacity problems that will be brought on by the elimination of the RFA?

More after the jump…

Let’s say you’re in Chinatown at 4:30PM and you want to get to Eastgate Park & Ride. You have two choices: do you go to International District Station and wait an average of 5 minutes for a 212/216/218? Or do you wait an average of 7 minutes at 5th/Jackson for a 211/215/554? Surfacing all Eastgate/Issaquah/Sammamish/North Bend service onto 2nd and 4th avenues would decrease peak headways for Eastside riders from 4 minutes to 3 minutes and remove 10+ buses per peak hour from the tunnel.

At destinations slated to become LINK stations, interim tunnel bus routes should strive to create a sense of “corridor permanence” in the minds of riders.

Route 106 is the only local route in the tunnel. Riders destined to Renton are much better served by Routes 101/102, and under the September service changes Route 124 is moving to serve Georgetown alongside the 106. Both routes should serve 3rd Avenue to give Georgetown riders frequent service.

Implication: Route 106 would move to 3rd Avenue and interline with Route 124.

There is important value in all-day, frequent, express service to suburban transit hubs.

Principle 5: Except where it conflicts with Principles 1 and 2, no peak-only routes.

Implication: Routes 77 (Maple Leaf/North City) and 301 (Shoreline) would be surfaced. Route 301
could travel alongside Route 358 on 3rd Avenue as far north as 3rd/Pine to give Aurora Village riders a choice of local vs express. Route 102 would remain in the tunnel as a minor variant of Route 101.

Under a hypothetical scenario like this, the tunnel would be reserved for regionally important corridors, peak-period runs would be reduced by 30-40%, and off-peak runs would be reduced by 20%. This would properly align common service onto common corridors, , would hopefully reduce enough runs to mitigate the effects of Pay-As-You-Enter, and would improve LINK’s reliability and ridership.  For intra-CBD trips there would still be a bus or train every 1.5 minutes in the peak and every 3-5 minutes off-peak.

Metro is working very hard on a post-RFA implementation plan for the DSTT, and this post is not intended as any sort of counterproposal (there is nothing as yet to counter), but merely as a planning exercise to filter routes by a set of specified criteria to see what operational impacts might result.  I have been generally impressed with the thoroughness and scope of Metro’s outreach efforts related to the RFA, and I am hopeful that Metro and ST will implement changes that leave us, at a minimum, with no net increase in travel times.

111 Replies to “Which Routes Should the DSTT Serve?”