by JAKE VANDERPLAS and MATT FEWINS

This blog has often covered transit-accessible hikes that can be accomplished in a day. But many of the most beautiful areas of Washington are out-of-reach of the day-hiker — even one who relies on a personal vehicle to get them to the trailhead. This summer, two of us set out to see if we could use transit to reach some of these more remote destinations. The result was an eight-day excursion that brought us from downtown Seattle past our State’s capitol, through the heart of Olympic National Park, over international waters to Victoria BC, and home, relying entirely on public transportation and our own feet. 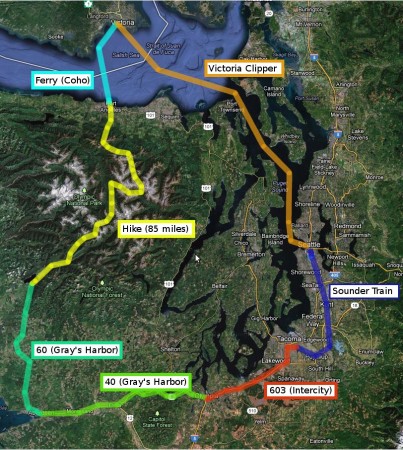 The trip started with a five-leg transit journey from Seattle to Lake Quinault Lodge, on the south-west edge of Olympic National Park. The following is a weekday itinerary: the trip is possible on a weekend, but transfers don’t work out quite as well.

The itinerary above worked out perfectly for us: the short transfer times were a bit worrisome (the latter two buses run only a few times each day) but we faced no significant delays. Our bus from Olympia to Aberdeen was running about 15 minutes behind schedule: we were a bit concerned at first, but were reassured when the driver got on the radio to make sure drivers of other routes would wait for connecting passengers.

The route 60 to Quinault Lodge is probably one of the most beautiful (and cheapest) public transit rides that exists. It travels up the narrow two-lane highway through hills dense with trees, dropping passengers in unlikely locations where they proceed on foot up rutted dirt roads.  Our destination, Quinault Lodge, was much more obvious. We arrived at 12:35 on the dot, still amazed that a $1.00 bus ride could take us 45 miles and right to the south-western edge of Olympic National Park.

The ranger station is steps from the lodge: after obtaining our back-country permits ($5.00 plus $2.00 per person per night, no reservations required) and bear canister ($3.00 suggested donation), we were ready for the hike. The main trailhead is 14 miles past Lake Quinault up a dirt road. There is a private shuttle service available (for information, contact the ranger station: 360-565-3100), but we were preparing to hike it when a father and son with extra room in their pickup offered to drive us the first ten miles. We gladly accepted and chalked it up as carpooling, an acceptable alternative to transit.

From the North Fork Trailhead, the trail lazily meanders up the north fork of the Quinault River for about 17 miles. The first day we hiked late into the evening under the cedar trees, catching glimpses of deer in the dense brush and even an owl hidden among the branches above us. The second day took us over the 3600 foot Low Divide between the Quinault and Elwha rivers. The climb over the divide is short but intense, offering glimpses of sunny meadows and an impressive waterfall before the trail descends again into the trees of the Elwha river valley.

By the third morning, we had reached the Hayes River Ranger Hut, just 16 miles from the Whiskey Bend trailhead to the north down the Elwha river.  Continuing down would have enabled a shorter trip, but we chose instead to turn east and head up the Hayes Pass trail. This opened us up to three days and 35 miles of hiking through colorful alpine meadows sliced by clear streams, cresting high passes with views of Mt. Olympus, sliding down late-summer snow fields, and spending nights in the crisp air of the higher elevations. Our trail took us over four steep passes: Hayes pass, Lost Pass, Cameron Pass, and Grand pass.  The extra miles and difficult trails were well-worth the added effort: this is some of the most beautiful back-country either of us have experienced, and three days to stroll through it was far too short.

By Friday morning, we reached the Obstruction Point parking lot, and opted to hike the eight-mile dirt road toward the Hurricane Ridge Visitor Center. The road follows the ridge-line, and offers clear views south toward the glaciers of Mt. Olympus and the high terrain we traversed during the week. The normal visitor to Hurricane Ridge arrives via the winding 17-mile highway from Port Angeles. No public transit yet exists on this road, but the alternative — a steep ten-mile trek around Mt. Angeles, over Klahhane ridge, and down past beautiful Lake Angeles — would be worth a trip in itself.  We hiked the first part of this on Friday evening, and spent our final night in the park at the edge of Lake Angeles, under this summer’s only blue moon.

The trail down from Lake Angeles ends at the park entrance gate, where one must walk, hitch-hike or (as the helpful ranger suggested) call a cab for the final six miles into Port Angeles. We opted to walk the distance (part-way along the road, part-way along the Peabody Creek Trail) to the Wilderness Information Center in town, where we returned our well-used bear canister. Other endpoint options include exiting the National Park anywhere on Highway 101 to the north or northwest and flagging down the Clallam County Transit route 14, which runs from Forks to Port Angeles and will stop to pick up riders almost anywhere that is safe and visible.

From Port Angeles, it is possible to return to Seattle via transit connections to Port Townsend and then a multi-agency Sea-Tac route promoted by Jefferson County Transit [pdf]. For the sake of the other riders during the 3.5 hour trip, grab a shower at the William Shore Memorial Pool in Port Angeles: they charge just a few dollars for the privilege.  Another return option is to take the Dungeness Line, a private shuttle from Port Angeles to Sea-Tac, with stops along the way, albeit at a much higher price.  Finally (and at significantly greater cost), you can choose to head to the water and catch the Coho ferry to Victoria, followed by the Victoria Clipper back into Seattle. Passports are required, and reservations are strongly recommended on the Clipper.

We chose the latter option, meeting a friend for two pampered nights in downtown Victoria, where we gave our blistered feet a much-deserved rest while enjoying Victoria’s beautiful views, historic sites, incredible food and wine, and the free outdoor music of the Vancouver Island Blues Bash. We set foot back in Seattle eight days after leaving, having ridden four buses, a train, two ferries, and having walked 85 miles through some of the most beautiful mountains in the world.

38 Replies to “Transit Hike: Through the Olympic Mountains”