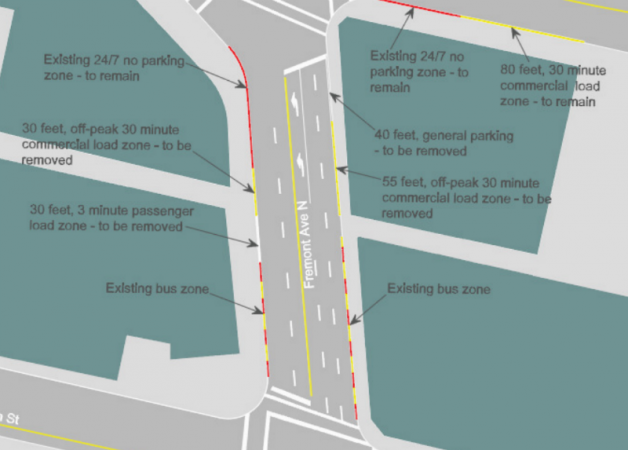 The Seattle Department of Transportation has proposed eliminating two small loading zones and a handful of parking spots in order to extend the very busy pair of bus zones in downtown Fremont to cover essentially their entire respective block faces, as shown on the map above. We’ve written at length before about the specific problems at these stops (along with some other transit problems on Leary between Fremont and Ballard) but the letter from Metro succinctly states the case:

The need for these revisions is driven by an increase in transit service and ridership in the area as well as interest in improving general traffic flow along the block. Since September 2012, transit service to these bus stops has increased from about 8 buses an hour to 15 buses per hour during the peak, greatly increasing the likelihood of concurrent bus arrivals at both northbound and southbound bus stops. Since two large buses can’t fully pull to the curb at either the northbound or southbound bus stops, buses often have to block a general purpose travel lane until the space is cleared. This causes delays to riders and to drivers that get stuck behind the waiting buses. Similarly, restricting parking along the block will allow buses to move through intersections without having to wait for vehicle queues from the traffic signal to clear.

Over 1000 riders use these bus stops each day; we believe these revisions will provide a great benefit to them as well as general purpose traffic.

If you’re someone who uses these stops and you want to comment on this proposed change, email your comment to Jonathan.Dong@seattle.gov by May 3rd. Absent supportive comments from riders, the public feedback might well just be grumbling about parking loss from adjacent businesses, so if this will benefit you, be sure to make your voice heard.