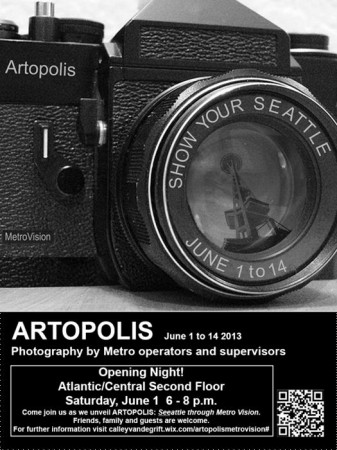 Ever wanted to see photo gallery of how Metro employees see the city? It sounds fascinating to me, and indeed, such a thing is happening tomorrow night, from 6-8PM at Metro’s Atlantic Base:

The showing, organized by graduate student Calley Vandegrift from the Seattle University Master of Fine Arts Program, will showcase the photography work of our Metro Transit operators. In proposing the show, Calley said, “Metro employees see more of the city than the average person does and I envision a photography show where King County Metro Transit employees take over as many venue places as possible to show how they see their city of Seattle”.

And they did. The theme of the show is, “Seeattle through Metro Vision“. The response to Calley’s call for photos was huge and impressive. About 70 photos will ultimately be displayed at Saturday’s showing.

Atlantic Base is located at 1270 6th Ave S, near Stadium Station, and several south Seattle bus routes; attendees can also park in the employee garage.