Tukwila’s transformation into a full-fledged urban center is charging full steam ahead. The major components of the effort roughly divvy up into the construction of Tukwila Village, and transformation of Tukwila International Boulevard (TIB) into a true transportation corridor with improved safety, sidewalks, and transit access.

Specifically: increased access to the new light rail station; reduction of Tukwila’s crime rate; and revitalizing the neighborhood around South 144th St. and TIB by adding a library, a police resource center, plaza/park, and residential/retail spaces.

The recent First Quarter Update  relates what progress has occurred:

1: The Transportation Corridors Comp Plan element will refocus on TIB, when reviewed in 2014, with further updates. The various committees executing the overall Comp Plan will work on its elements from April-July 2013, with the city council considering possible changes from August to October. 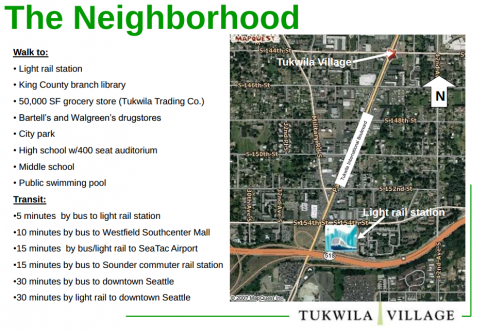 In addition, a public safety-oriented sidewalk policy will be established. Most recently, the city of Tukwila also approved an ordinance (login may be required for access to the ordinance text) for acquisition of up to 7 properties along TIB, including condemnation if necessary.

“We are indeed completing our appraisals and will start negotiations with the property owners in the next few weeks,” said Derek Speck, Tukwila economic development administrator. “This summer we will go to council for direction in terms of what the city would do with the properties once we’ve acquired them.” 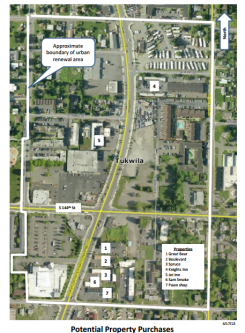 Speck stated it was a sensitive issue for property owners, but he expected some motels to be demolished and overall “properties will be used for better things”.

Speck stated that ‘traditional policing models’ had not improved matters over the past couple decades, and implied the condemnation was also justified by the continuing high rates of crime, pointing at one example in particular.

“In terms of others in general who may view condemnation as abuse of government power, I don’t expect they will be very convincing in this case since these properties facilitate so much horrible crime,” he said. “If you look at our project website you can see how much crime happens at these motels as compared to others in Tukwila.”

He further added: “We are not currently doing any rezoning in that area.  We will work through the public process to  amend our comp plan for that area in 2014 and 2015. I predict we will have some zoning changes in 2015 and 2016.”

2: The Finance and Safety committee will inspect the consultant selection and contract for the Facilities Needs Assessment in the second quarter.

3: For the Parks, Recreation and Open Space Plan, a consultant has been selected, and various community workshops, surveys, and focus groups will begin.

“Tukwila Village is a real project that will be adding a community gathering place,” Speck said. “It will also add new, higher quality apartments.  As we demolish some of the motels, we will eliminate the location of a lot of crime.  And, I predict as the City updates its comprehensive plan (by 2015) for this area, the vision will further embrace zoning and land use regulations that support a walkable, transit oriented neighborhood.” 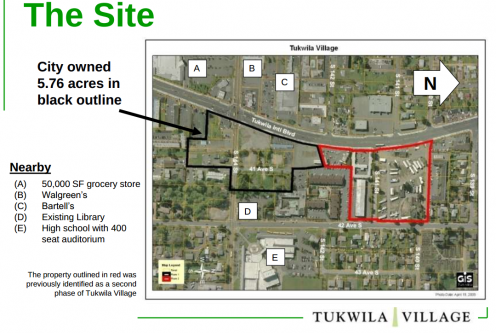 As for the design review, residents will have a public meeting in mid-July to appraise the changes, according to Speck, after which they’ll go thte Board of Architecture Review for approval. More specific details, like building height, additional transit changes, and such, are forthcoming.

“We don’t have a more user friendly general document and nothing with how many jobs and residents this area could attract.  Maybe we’ll generate that during the comp plan amendment next year,” said Speck. 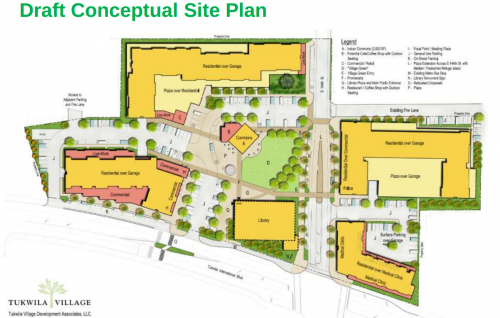 The overall push is laudable. Indeed, given Tukwila is so diverse and yet economically disadvantaged, transformation into a truly urban center, with plenty of transit access and walkability, could improve things. Tukwila seems to be making a real push for renewal, so hopefully it continues successfully.