Central Link failing to meet, meeting, or beating projections is a common topic when it comes to discussing the success (or failure) of the initial segment.  This discussion will only intensify as we move towards a possible 2016 Sound Transit 3 ballot measure.  In order to help the discussions be as fact based as possible I’ve put together a couple posts discussing the different projections for Central Link over time compared to reality, and thrown in some unscientific projections of my own just for visualization.  This first post will focus on short term projections gathered from Service Implementation Plans.

The original projections come from the 2009 and 2010 SIPs, both produced before the full Initial Segment was open.  As discussed multiple times due to the Great Recession (80,000 less jobs downtown than projected) and other factors Central Link did not meet its initial ridership projections.  After having a full years worth of data to analyze, in 2011 Sound Transit lowered their projections.  In response to the downward revision and Sound Transit’s initial numbers being off in the first place Martin had a great piece with Sound Transit planner Bob Harvey on the process for creating projections and why the projections were off.  It’s well worth a refresher read.  A more detailed explanation of individual factors was given in the Central Link – Initial Segment Before and After Study discussed last week.

The continued strong growth in the years since opening caused Sound Transit to revise their numbers back upwards in 2012.  And this year Link has beaten even those higher projections.  In August Link reached a yearly moving average of 27,925 weekday riders compared to Sound Transit’s projection of 27,900 at years end.  If Link can maintain its 10.7% year over year growth rate in the four months from September through December it should finish the year with an average of around 28,832 weekday boardings.  In the 2013 Service Implementation Plan Sound Transit projected 29,600 weekday boardings for 2014, meaning that on January 1st 2014 Link will already be over a third of the way to their year end goal of 1,700 additional riders.

Because I like data and graphs I put this all down into my ridership excel spreadsheet and created the below. Projections come from 2009, 2010, 2011, 2012, 2013 and 2014 Service Implementation Plans.  The 2009 SIP had the same projections as 2010 so it was removed.  The ridership data comes from Sound Transit’s monthly ridership reports covered here. 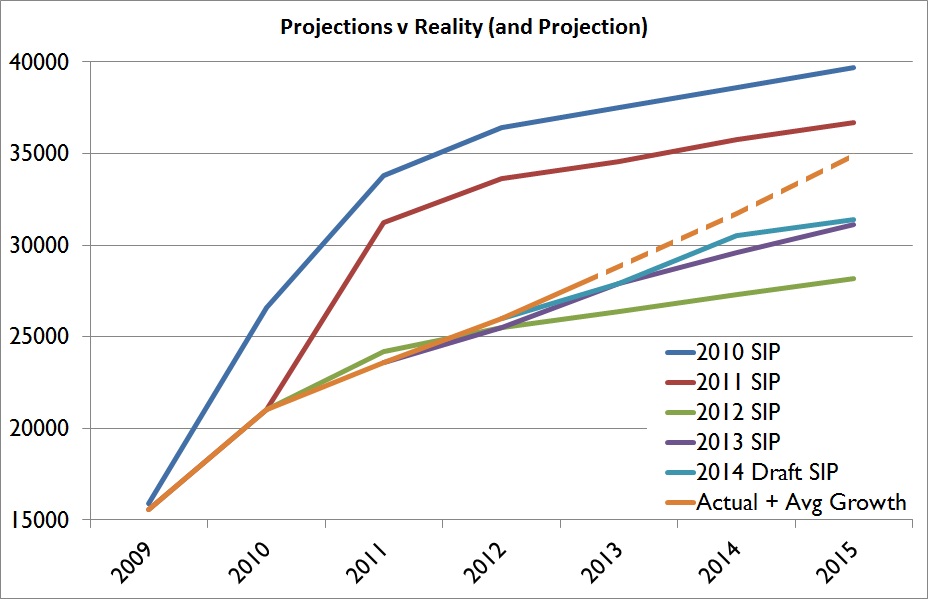 It’s not shown on the page but if Central Link can maintain the 10% growth its experienced since opening then in 2018 actual ridership will cross the 2009 and 2010 SIP projections.  That is of course completely hypothetical as basing 5 years of growth on 3 years of data is extremely shaky, not to mention the fact that in 2016 with the opening of the University Link Extension it all becomes academic anyway.