Since October 2010 we’ve  followed the Lynnwood Link project fairly closely. Unlike other Link extensions, Lynnwood Link had several viable alignments including SR-99, I-5 and NE 15th Avenue. While many in the transit community who believe in the importance of TOD favored the SR-99 alignment; New Starts competitiveness, cost, and institutional momentum favored the I-5 alignment.

From a TOD perspective this was disappointing. However, as discussions about the I-5 alignment advanced, the idea of a NE 130th Street Station to serve the Bitter Lake and Lake City neighborhoods emerged. This station, located half way between the two Hub Urban Villages would certainly help mitigate the lack of TOD immediately around Lynnwood Link stations. Today the City Council will again move to support the NE 130th Street Station.

Because TOD potential along I-5 between Northgate and Lynnwood is so limited, feeder transit must play a disproportionate role in connecting riders to the stations. Frequent, fast and reliable bus connections to the Aurora Avenue and Lake City Way corridors via Bitter Lake and Lake City Hub Urban Villages would do that. These areas have already grown significantly and have strong and growing transit demand. Since 2005 the Bitter Lake and Lake City Hub Urban Villages have seen more than twice as much growth as the Northgate Urban Center (1,522 to 739) and transit re-orientation of Aurora Ave in Seattle and Shoreline could result in significant additional growth.

NE 130th is the best connection between these two areas. Low-levels of congestion, the sequential and linear location of major destinations, and Link headways of 4-8 minutes all-day make transfers to very-frequency feeder bus service ideal. Currently it takes 40-50 minutes to get between the two Urban Villages by transit compared to ~5-10 minutes by car. A single very-frequent route along Aurora Avenue, NE 130th and Lake City Way could connect: END_OF_DOCUMENT_TOKEN_TO_BE_REPLACED

…I do think there’s an even better way. That would be to simply stop handing out new street permits altogether and turn the existing permits into tradeable private property owned by the people who hold them. Creating that kind of windfall for incumbent parkers would be moderately unfair, but precisely because it’s unfair it would actually accomplish the desired political objective of halting parking-related objections to new development. For incumbent permit-holders, development would no longer degrade the value of their parking permits. Since the total number of permits would be capped, there’d be no scarcity of street parking. And since the permits would be tradable property, new residents would actually increase the market price. Now everybody’s happy.

The basic rationale with parking permits is thanks to new construction or a new attraction (e.g. a Link Station), demand for street parking exceeds supply. The way Seattle currently addresses this problem in a commercial district is with metered parking. In a residential district, it’s a “ Restricted Parking Zone” (RPZ) that allows 2-hour parking for guests and customers and offers all residents a long-term parking pass for a nominal annual fee, discounted for low-income residents.

This approach has its merits, but it doesn’t align the incentives of residents with broader policy goals very well. If a new development adds residential units, that increases competition for parking. As a result the fees will have to increase (unlikely for political reasons) or it will simply become harder to park. Similarly, taking on-street parking for safer bicycling or faster transit constrains supply and will either raise parking pass fees or make parking spaces scarcer. Residents who have no subjective desire for more neighborhood activity or transit service and don’t care about broader environmental or social justice goals therefore correctly perceive their interest in opposing development and bike/transit lanes.

END_OF_DOCUMENT_TOKEN_TO_BE_REPLACED

So this EotW is a bit further from Link  than most, but easily accessible by walking and transit and in a historic streetcar suburb that will hopefully have an infil station in ST3.

The Tin Umbrella, a cafe and South Seattle’s only coffee roaster, recently opened in the historic Hillman City neighborhood.  In order to celebrate the changing of the seasons and their first two months of operation this weekend they will be hosting a sidewalk native plant sale, a local wildlife photography art show and pastry exibition.  Click here for more details.  The weather is supposed to be gorgeous this weekend, so if you don’t have any plans stop on by and check it out.

To get to the Tin Umbrella, walk east from Columbia City station to Rainier Ave S (.4m).  From there either walk the remaining .6m to Findlay and Rainier in Hillman City or at Edmonds and Rainier jump on one of the frequent 7s taking it three stops to Orcas and Rainer and then backtrack a block north.

While in the neighborhood (and if 21 or older) check out the semi-recently opened Spinnaker Bay Brewing a block south, Seattle’s only all women owned and operated brewery.

At the risk of OTing my own post, this reminded of something I’m not sure is worth it’s own post so might as well go here.  First off, thanks to everyone that responded to Matt’s question about the (seeming) lack of female participation on the blog, both in the comments and via email.  One of the suggestions sent in via email would be to have more smaller/low key meetups.  Is that something people would be interested in.  Instead of a big event with speakers and whatnot, just a couple of the blog writers at a coffee shop? 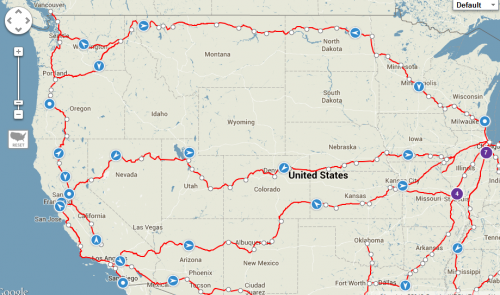 Great news, train nerds: now you can watch Amtrak trains move about the country in something like real time. It appears that a fair number of these icons report scheduled position rather than actual position, but it’s a really nice interface.

Eric Jaffe explains it all here. Kenmore Park and Ride by WhenEliseSings

Last week the Sound Transit board made the decision:

Garrett reported on the revenue and ridership impacts in July. Chris Karnes offered a thoughtful argument against the idea.

Local residents will often preserve views and other aesthetic principles through legislation and various conditions placed on development. On the surface, this appears to be costless except to “developers” (and there’s certainly no cost-benefit analysis done on the policy when the city creates it), but it’s rare that the true costs emerge so clearly as in a story in Sunday’s Seattle Times ($) about the UW’s planned animal research facility, threatened by escalating costs:

But the cost of the project has skyrocketed by almost 50 percent from its initial projection earlier this year, to $123 million, or about $1,000 per square foot…

The building would be entirely underground, and the area has such a low water table that most of it would be underwater. Eric Smith, director of major capital projects for the university, likened it to “building a bathtub,” and said the building must be heavy enough to counter hydrostatic forces or it would be pushed right out of the ground…

“This is not chump change; it’s $123 million, and we don’t have the metrics to justify the investment,” said UW Regent William Ayer during a subcommittee meeting in September. The item was later pulled from the meeting calendar…

But why does the building have to be built underground, you ask?

He said the building would be underground because the university is running out of space to build aboveground. The grassy lawn between Foege and Hitchcock halls is a good location because it’s near health-sciences buildings, but the university has an agreement with the city of Seattle to preserve the view from Pacific Street to Portage Bay, so the building must be underground.

Although there are multiple reasons for the high cost, we have a situation where a public university is spending significant amounts of money to preserve an unremarkable view of Portage Bay from the street. That’s of course bad for the taxpayer and for whomever ends up covering the high costs (i.e. students). Alternatively, the building may not be built at all, which means less economic activity, less tax revenue, less scientific progress, and less activity in a location within walking distance of two future subway stations.

[UPDATE from Martin: to my knowledge, Sen. Murray hasn’t responded to Ben, but he responded to PubliCola: “Murray says he doesn’t know the specifics of the Westlake cycle tracks proposal, but says he’s for cycle tracks in general.

‘I support cycle tracks. I used them in Europe. If they think I am opposed, then they’ll be surprised.'”]

Yesterday, I received an invite to an Ed Murray fundraiser by the Northwest Marine Trade Association asking me to “Save our parking! Save our businesses!”

The message attacks “Mayor McGinn’s cycle track which will absolutely have a devastating impact on the well-being of the Westlake Community.”

From an email conversation with one of the organizers, I learned Murray has told them that he’ll delay design and construction of the Westlake Cycletrack and commission a new study of business impact. I’ve asked the Murray campaign for a clear statement, and will follow up here if I receive a response.

Ironically, trading some parking for bicycling infrastructure leads to an increase in business. With bicycling skyrocketing in Seattle and driving alone falling, the need for parking is diminishing, and the need for safe bike routes is increasing.

When Murray talks about transportation, he often explains he would work regionally – but this project is a high priority of the Puget Sound Regional Council, even receiving funding from them last year. For him to oppose this project (or, you know, “let’s do another study” when construction is about to begin) would mean he’d throw regional *or* local needs under the train when presented with opposition to a project from his backers.

The Seattle Chapter of Young Professionals in Transportation (YPT), a newish group for young professions in the transportation engineering, planning, policy and related fields is hosting its first presentation this Thursday. The presentation, by Puget Sound Bike Share (PSBS) Executive Direction Holly Houser, will be a great opportunity to learn more about the bike share system in detail. Holly has a good radio interview about the system basics here. I’m particularly looking forward to learning more about what kind of implementation challenges Holly is facing and what lessons she learned from watching other systems around the US launch over the last year or two.

The presentation this Thursday October 3rd, will be in the offices of Parsons Brinckerhoff on the 32nd floor of the Wells Fargo Center (999 3rd Avenue) beginning with professional networking at 5:30 p.m. and the presentation starting at 6 p.m. This will be a great opportunity for transportation professionals to learn more about the PSBS and meet fellow transportation professionals. Please share with colleagues and RSVP here or at this Facebook event page.

P.S. As the Seattle Bike Blog has noted, bicycle planning and advocacy is an area where women in leadership roles are very well represented in Seattle.