Recently, a friend send me an excerpt of Metro’s rules for fare collection and enforcement for Rapid E: 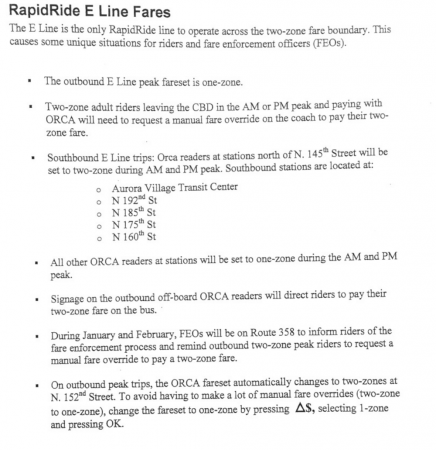 I have some free advice for Metro management: this is insane, and the complexity and confusion it will create for your staff and passengers, and the discouragement from using ORCA, will vastly outweigh the whatever paltry benefit the zone fares could provide.

Here’s what’s actually going to happen in the real world:

Real leadership from Metro would involve management acknowledging this reality, telling the King County Council that the current zone system is archaic and unworkable in this context, and that the council needs to do one of three things as part of the E Line deployment: abolish the zone fare system, make an exception for the E Line, or fund a  complete system of off-board readers that can handle tap-on and tap-off seamlessly.