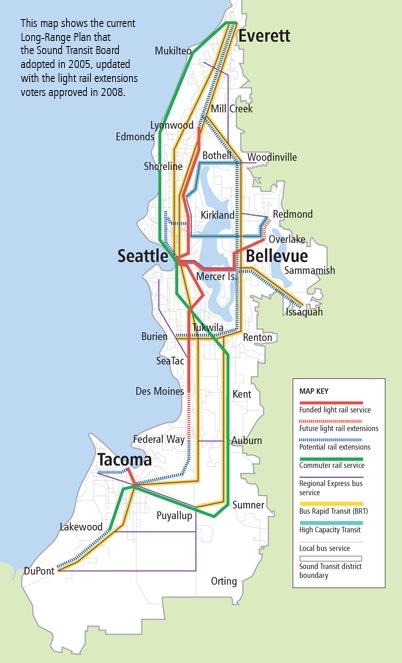 Today is the deadline for comments on study topics for the update of Sound Transit’s Long Range Plan, which will serve as the list of candidates for an ST3 (and probably ST4) package. Although there are lots of interesting ideas, there is by definition no data. When I start thinking of neighborhoods to serve, I inevitably turn to the ones I know and the ones I’d like to go to, which isn’t a particularly insightful guide to where the need is.

So instead, I’ll say this: Sound Transit, go where there’s going to be density. We should have no repeats of the density fights around Roosevelt, Beacon Hill, and elsewhere. When it’s time to pick corridors in a few years, light rail ought to go where there are already lots of units per acre, or where cities have already zoned for lots of units per acre. For various reasons, Link will have to go some places where the political will exceeds the development potential. In those cases, look for commitments to improve access: bus priority, municipal expenditures on parking, and so on.

Lastly, the plan should separate long corridors into discrete segments that can be evaluated separately. Ballard to West Seattle via downtown is an attractive concept with a certain geometric logic to it; however, if it turns out that the Ballard segment has much higher payoff, ST ought not to cripple it in the selection process by tying it to a lower-performing segment.

I can’t wait to see the data.

50 Replies to “Sound Transit: Go to the Density”