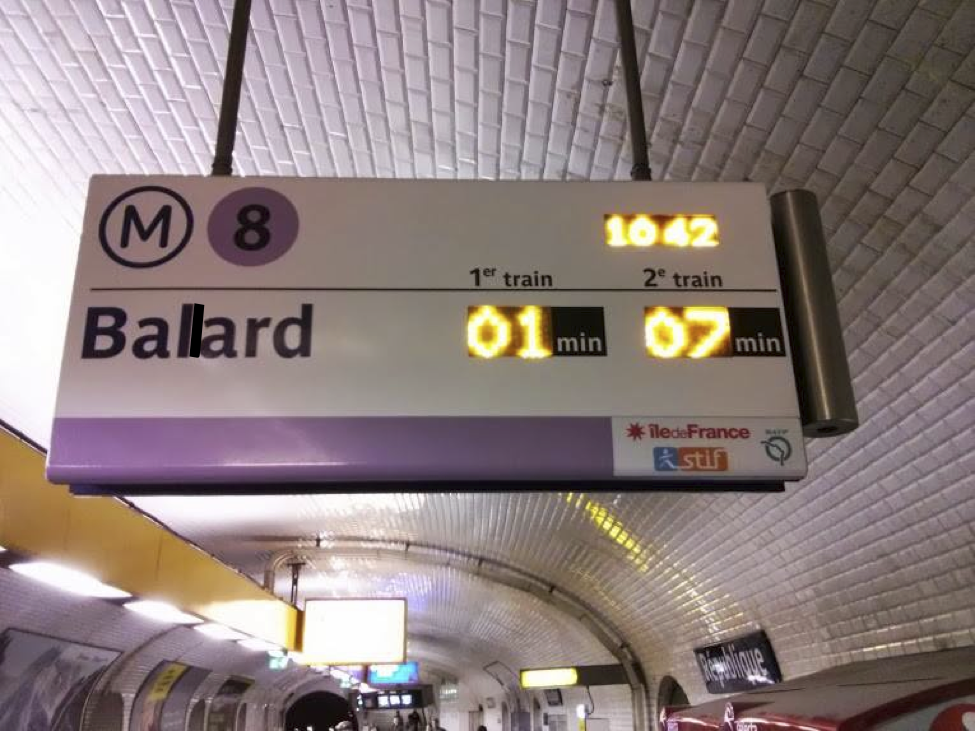 After nearly 1,800 public comments and 6 more months of technical study, Sound Transit held its final open house Wednesday to present refined options (‘Tier 2’) for rail transit between Downtown and Ballard.  After this round of public comment, the results of the full study will go before the Seattle City Council and the Sound Transit Board early next year.

When we last left this project, Sound Transit and SDOT had presented eight corridors more as conceptual thought exercises than actual proposals, helping to focus reactions and reveal the underlying qualities that matter to people.

In a testament to a high demand for fast, reliable transit – and no doubt in some part due to the work of Seattle Subway – Sound Transit said:

“We heard that efficient and reliable service that is ideally grade-separated is a major priority. We included many corridors with high levels of exclusive right-of-way, including a full tunnel option.”

Unfortunately, in response to public feedback ST also eliminated high fixed bridges from consideration, raising the stakes somewhat and leaving us with only drawbridge and tunneled options for crossing the Ship Canal.

The initial 8 concept corridors were refined down to 5 and then analyzed for ridership, reliability, speed, environmental impact, and impact to other modes. Full descriptions after the jump… 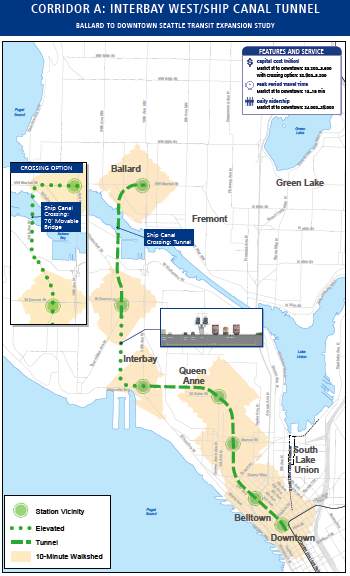 This option would serve a 2nd Avenue tunnel through Downtown and Belltown, turn north for stops near Mercer and Galer in Queen Anne, turn west to emerge elevated across the Interbay Yard, turn north for a stop near East Magnolia at Dravus, and finally cross the Ship Canal either in a tunnel or on a 70’ drawbridge. The corridor would terminate near 15/Market in Ballard. 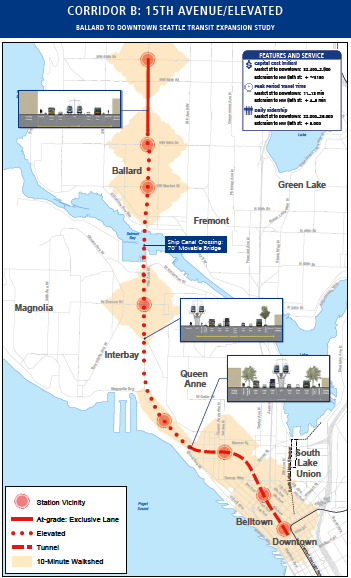 Basically a rail version of Rapid Ride D, Corridor B would also tunnel from Downtown through Belltown to Lower Queen Anne, emerging to run elevated through Interbay, with a station near 15th/Dravus before crossing the Ship Canal on a new 70’ bridge adjacent to the current Ballard Bridge. The line would continue elevated as far as 65th near Ballard High, then descend to run at-grade up to 85th. 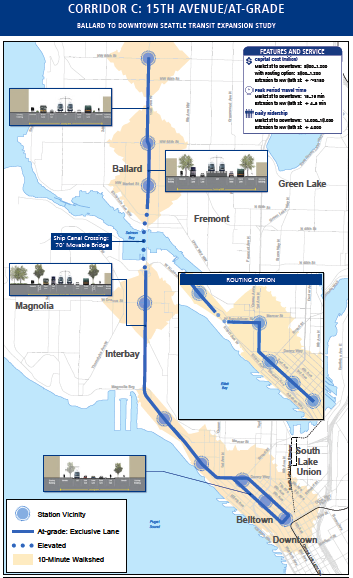 The cheapest option, this rapid streetcar concept would run at-grade in a Belltown couplet on 2nd and 4th, terminating near Stewart St (how this would interface with either Westlake Station or the proposed Stewart/Olive couplet of a 1st Avenue streetcar is unclear). Turning west on Denny and bypassing Lower Queen Anne, the line would run MLK-style along 15th Ave W, crossing the Ship Canal on a 70’ bridge and continuing on the surface up to 15th/85th. 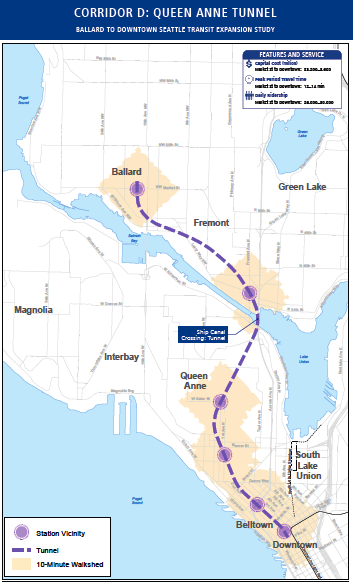 The only all-subway option presented, Corridor D would tunnel all the way from Downtown to Ballard via Lower Queen Anne, Upper Queen Anne, and Fremont. The line would terminate  on Market St a few blocks west of 15th. 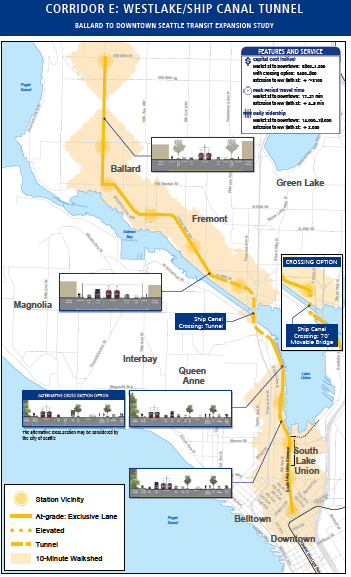 The only option skipping both Interbay and Queen Anne, this rapid streetcar concept would branch off of the existing Westlake Avenue streetcar tracks, operate with an exclusive lane, cross the Ship Canal either in a short tunnel or a 70′ bridge, then run through Fremont, Frelard, and the commercial core of Ballard before terminating in North Beach on 24th Ave NW. 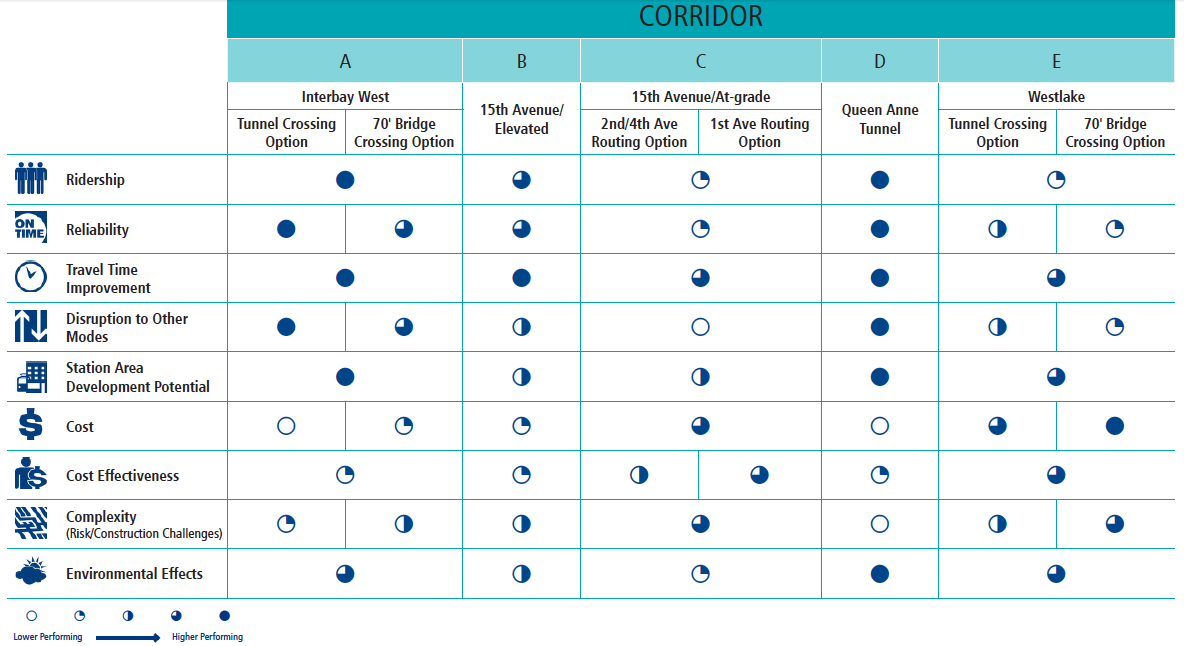 [Ed. Note – the chart above incorrectly shows Option E’s maximum travel time as 20 minutes, when in fact it is 21. We are working on correcting the chart.]

(1. Grade separation makes all the difference. Unsurprisingly, the tunneled options (Corridors A and D) have the best ridership, the best reliability, the best travel time improvement over current conditions, the least disruption to other modes, the most TOD potential, and the least environmental impacts. At $3.2 billion, they are also by far the most expensive. Meanwhile, the lone elevated corridor (B) offers the fastest trip to Ballard, clocking in at just 11 minutes. By bypassing Queen Anne and eschewing tunneling, Corridor B loses 2000-4000 riders per day but saves as much as $800m in capital costs. While both at-grade corridors (C and E) perform poorly when directly compared against tunneled and elevated options, they still far outperform current bus service, and the Westlake corridor (E) outperforms at-grade Interbay (C) despite having only half a walk shed.

(3. Corridor D could only be built with further expansion in mind. An all-tunnel option would preclude an O&M facility anywhere between Ballard and Downtown, forcing construction at least as far as SODO and pointing toward West Seattle. Not only that, but the northward orientation entering Fremont would be tailor-made to branch off for an Aurora corridor line.

(4. However, you could build Corridor B and E together for the price of A or D alone. Basically, we could have an 11-minute Skytrain to Ballard AND a rapid streetcar to Ballard/Fremont for the same price as a subway to Ballard via Queen Anne. That’s a really tough question.