Given the new flexibility afforded by the two new sets – each set must overnight in Seattle at least once per week, limiting the schedule somewhat – ODOT has announced a new schedule for Portland-Eugene service beginning on January 6, 2014.

Currently, northbound departures all leave Eugene before 1:00p and the first train doesn’t arrive in Eugene until after 5:00pm, making day trips to anywhere south of Portland impossible and even one-night stays impractical. This will considerably improve the options for Portlanders visiting the University of Oregon, anyone with state business in Salem (including reverse commuters from Portland), and others.

ODOT has published the new schedule for Oregon service here, but the full corridor schedule has not yet been released (we have an email in to WSDOT). However, given that WSDOT is not changing service levels at this time, we can reasonably infer the following:

If so, the new schedule is as follows: 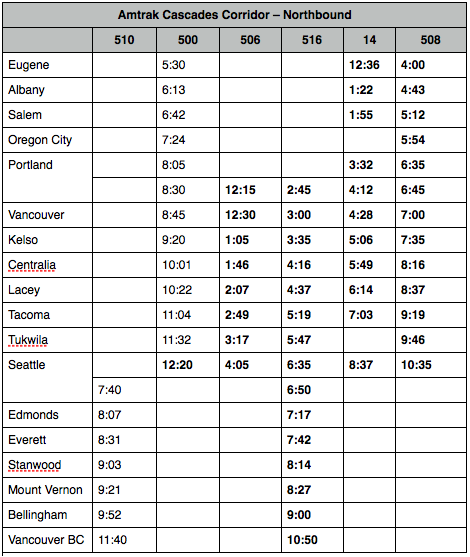 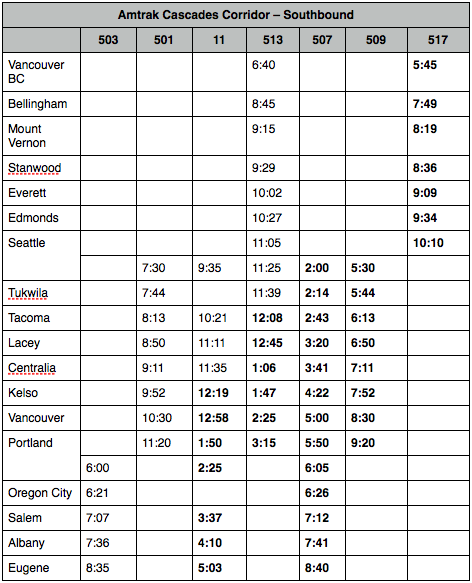 While our fleet will be badly underutilized until the Point Defiance Bypass is complete – 7 trainsets for 11 daily trains! – the added flexibility is greatly appreciated and the redundancy should at least prevent some of the maintenance problems such as locomotive failures that have occurred too frequently in the past couple of years. Though we’re still many years away from a fully usable schedule in which you can arrive in Portland or Seattle in the morning, this new schedule does represent progress.