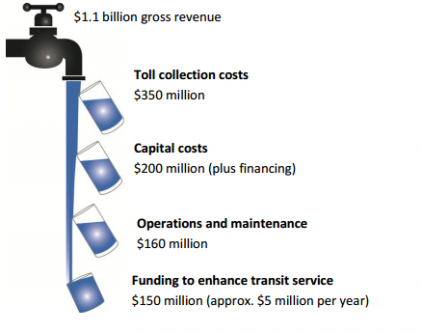 The “Advisory Committee on Tolling and Traffic Management” met Tuesday and the notes are up online now. A draft recommendation for the tolls was presented and there are a few interesting bits of information in the recommendation:

In order to raise $1.1 billion off a $1 toll, you need a billion trips, which over 30 years works out to 91,300 a day or so. That seems a little high to me, but we’ll see. If their estimates are anything like the SR-520 numbers, it’s going to be tough to get all that money. If the toll revenue comes up short, I would hope that the transit funding is preserved, but I guess will have to see about that, too.