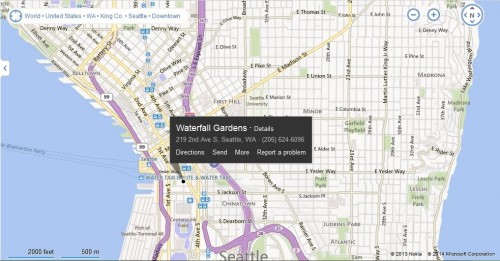 On Fridays some friends and I have a semi-regular tradition of grabbing sandwiches from Tat’s (go with either the Italian Grinder or the Tatstrami) and heading over to Waterfall Garden Park to relax and pontificate on what needs to be done to make this city perfect.  It’s one of my favorite parks in Seattle, a place I make sure to take visiting friends and family.  A great resting point after a long week of work or a day showing off downtown.  What makes it so great:

1. I can get to it. I don’t have long for lunch so need a place located where I am.  Same thing when showing off the city to people.  It needs to be where we are.

2. It’s worth going to.  An actual three story waterfall in the middle of the city, with maintained ‘green space’, a glass roof (it’s not always bright and sunny) and in winter, heating.  It’s not some barren wind/water swept empty plaza.

3. It’s enjoyable to just be there. The tables and chairs (plus above mentioned setting) make it a great place for people to be.  And it’s great to be around people.  And yes, maybe this makes me a bad progressive, but there are security and maintenance staff that help make it a pleasant experience.

Where is your urban oasis and what makes it great?

53 Replies to “What Makes an Urban Oasis?”