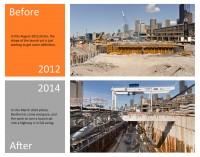 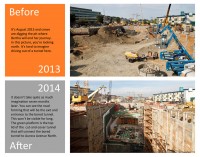 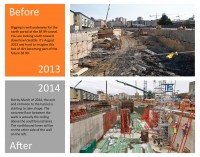 These images are of the meagre progress the tunnel project has made. Images courtesy WSDOT.

A couple of months back I asked whether we should continue with the deep-bore-tunnel (DBT) replacement for the SR-99 viaduct. At the time, Bertha, the Tunnel Boring Machine (TBM) had been blocked for months with no date for its unblocking (if that’s a word), traffic on the viaduct was way down (though that data appeared to be bad, other data does show decline), the tolling revenue looked to be much than expected and there was confusion over who would pay for the seemingly inevitable overruns. In the intervening weeks, we’ve learned a few more things:

None of this is very surprising, but what is surprising is that state transportation secretary Lynn Peterson is now saying there’s a “small possibility” the project could be cancelled. Now, I don’t know if these statements come from a bargaining position or an earnest assessment of the situation, but I hope more people wake up to the possibility of cancelling this project sooner rather than later; this project is unnecessary and promises to be a money pit far into the foreseeable future. Let’s cancel it now rather than throw more good cash after the bad we’ve already buried in this tunnel.