As part of the 2008 voter-approved ST2 package, Sound Transit was asked to evaluate high-capacity transit on several corridors. Originally scheduled for study in 2018, we’re getting them 5 years earlier thanks to the efforts of Seattle Subway and the McGinn administration forcing the issue a couple years back. We saw Ballard last year, and now we’re getting our first glimpses at alternatives for West Seattle-Burien-Renton. At this early stage both Bus Rapid Transit and Light Rail options are on the table. 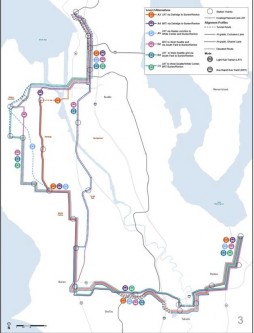 Alternative “A” is a long, L-shaped route from Downtown to West Seattle and Burien and Renton that takes the ST2 study area literally. If Alternative “A5” looks familiar, it’s because it mirrors almost exactly the routing David mapped out in a post on the subject last year, tunneling to about Holden St. and surface-running thereafter. “A3” is a Delridge alignment, elevated South to Delridge and mostly surface-running beyond that, and “A4” is a BRT variant.

Alternative “B” splits the area into two separate lines, with one running from downtown to West Seattle, and another from Downtown, through South Park and straight on to Burien and Renton.  Planners noted that BRT (“B2”) would not be sufficient to meet demand from Renton to Seattle.  Light Rail (“B4”) in this alternative would serve the most riders (over 100K!) but would be the most expensive to construct, with two lines and everything north of Burien either elevated or in a tunnel.

Finally, Alternative “C5” runs mostly elevated light rail from Downtown to West Seattle, and then gives Burien/Tukwila/Renton a BRT route that’s not much different from RapidRide F. Renton-Seattle and Burien-Seattle commuters lose a one-seat ride in this scenario, but given the fiscal realities and other priorities of the South King subarea, that may not be possible anyway.

You can watch the presentation to the ST board at this link, which also includes bits on Lynnwood-to-Everett and I-405 BRT options. The comparison chart is below. Note that the costs* for most alternatives include a downtown Seattle tunnel south of Westlake, probably about $1 billion, but likely needed for a Ballard-downtown line as well. 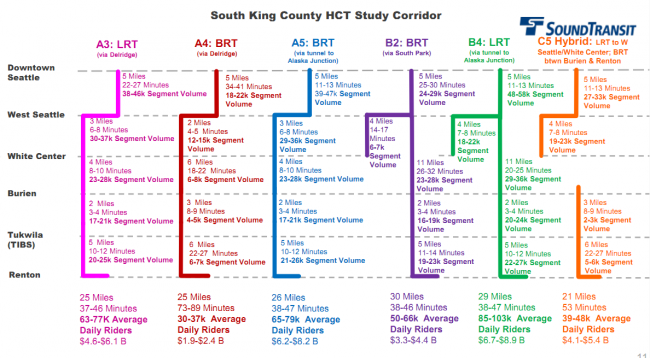 West Seattle Blog has the full slide deck, which you can also find here. We’ll have more on these options in the coming weeks.