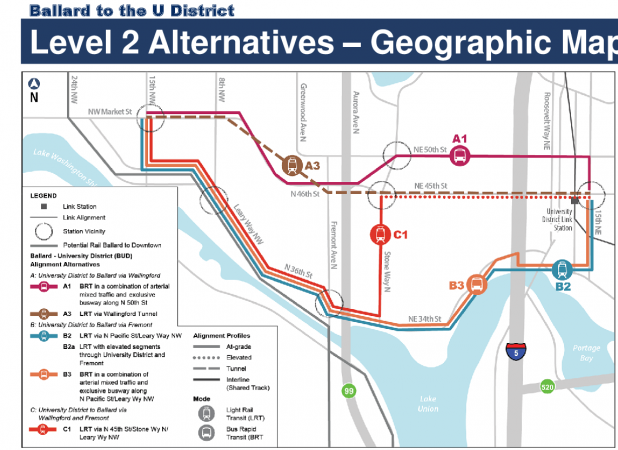 The most direct option is a tunnel via Wallingford (A3), serving 22,000-26,000 riders with an end-to-end travel time of 6-9 minutes. This suggests a trip from Ballard to Westlake of about 20 minutes. Like any tunnel, it’s relatively expensive per mile: estimated to cost $1.4-1.9 billion in 2014 dollars.*

Path B2 serves central Fremont by bypassing Wallingford. Although not shown on the map, the study examined both an all-surface option and one that runs elevated through the U-District and Fremont. The trip takes 10-12 minutes (10-13 for surface) and 21,000-26,000 riders (20,000-24,000 surface). The costs range from $1.2-1.6 billion, with negligible cost differences between the options.

All three rail options are in the same ballpark of cost, ridership, and travel time. All are huge improvements over the status quo. C1 serves the most people, but the all-underground option avoids the thicket of legal challenges sure to hinder any above-ground choice, in addition to being more reliable. On the other hand, the tunnel makes it much more complicated to add any more stations.

No one knows how big the funding package might be, but if it were possible to do both, there is significant overlap between the options that serve Fremont, resulting in some savings. Although many might conclude that a downtown line might “compete” with a UW route for riders, in fact the network effects would likely enable more trips and boost ridership by more than the sum of their estimates.

The BRT options are in a different class. They mix operations in traffic and exclusive busway and have travel times between 14 and 22 minutes. They cost no more than $400m but serve between 10,000 and 17,000 riders. 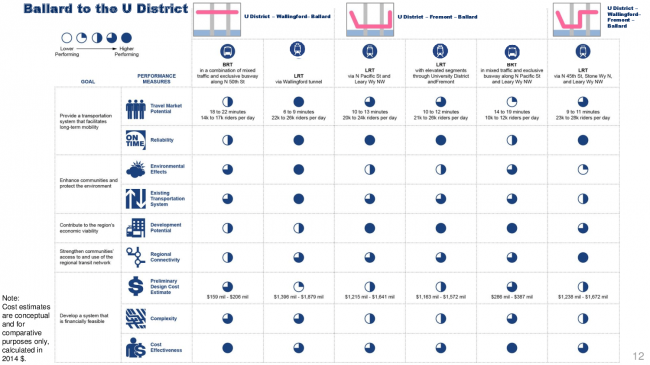 * “Cost estimates are conceptual and for comparative purposes only.”