There are many commuter campaigns that seek to reward commuters and boost their morale/enthusiasm. Most campaigns of this type require some sort of trip logging on a calendar, such as the statewide Wheel Options, Cascade’s Commute Challenge, or the McGinn-era WalkBikeRide.

Commute Seattle has launched a contest called Creative Commute, foregoing the somewhat stale trip-logging precedent for something a bit more qualitative and participatory. The Creative Commute contest asks Seattle commuters to share what they love about their commutes via their choice of digital media, whether videos, photos, poems/haikus, essays, storyboards, comics, etc. The entries will be judged for creativity and originality, and will be shared on Commute Seattle’s website and on Twitter, Facebook, and Flickr. Video entries will be uploaded to YouTube.

The Grand Prize winner will take home their choice of an electric assist bicycle or an iPad Air. 2nd Place will win $250 to spend at REI, and 49 runners up with take home $50 to REI.

Eligibility: Entrants must work in the City of Seattle and entries must feature a commute mode other than driving alone
Deadline: Entries must be received by August 31
Accepted File Types: txt, doc/docx, pdf, jpg, gif, png, jpeg, mp4, mts, avi 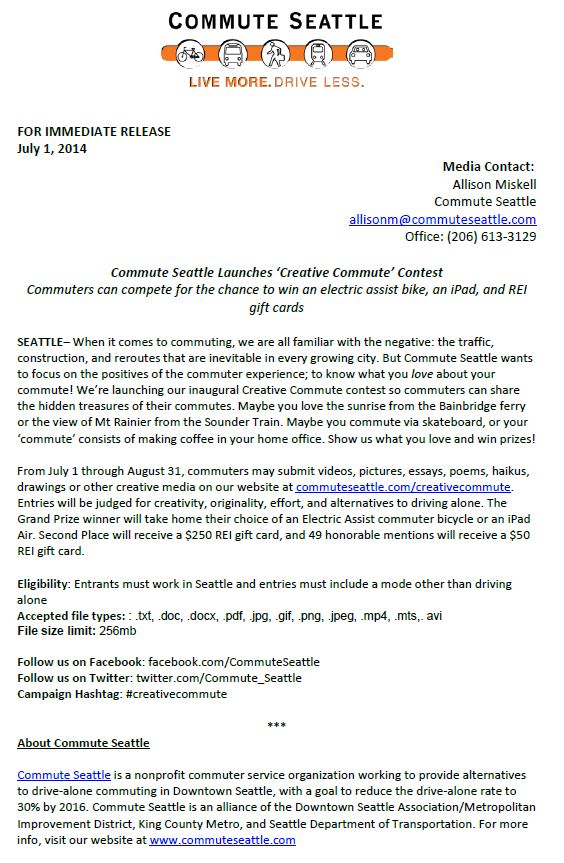