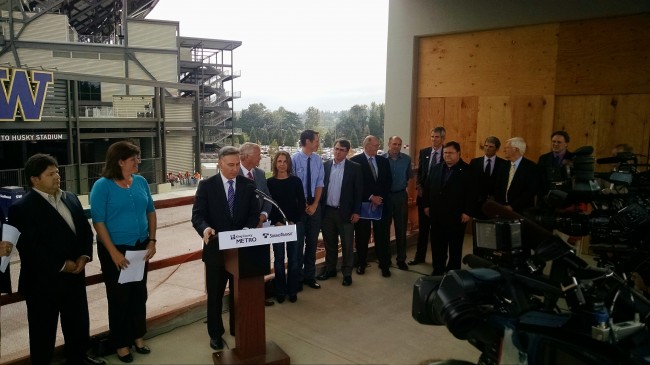 Yesterday, Dow Constantine, King County Executive and chair of the Sound Transit Board, along with other regional officials, unveiled a high-level plan to improve integration between the region’s various transit agencies. The report covers a number of areas — station design, wayfinding, bus-train transfers, better trip planning and realtime arrival information through smart phones and displays — and the ideas there seem laudable. High-level political reports are less important for their details (which politicos usually just aren’t versed in) and more important for their sentiment, which tell staff and management which direction they should be heading with their work.

To me, though, the most interesting part are some of the ideas around network design, and there are more specifics here. Here’s a few, which stand out to me:

Sadly absent are ideas about infill stations along the existing light rail segment, or about converting any of the “potential stations” on the Lynnwood Link alignment, notably at 130th St in Seattle, and 220th St in Lynnwood, into actual stations. Each one of these, while expensive, would offer significant access and connectivity improvements for local transit riders.

107 Replies to “Constantine Pushes Agencies to Integrate and Innovate”