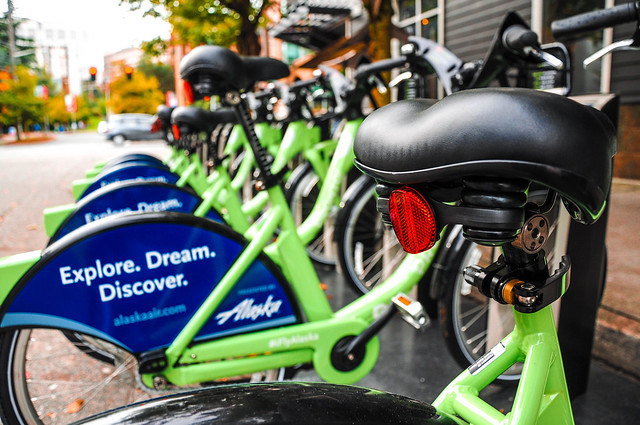 I’ve seen several complaints raised on the web and twitter that Pronto Bike Share only serves the wealthier neighborhoods of the city, and has ignored lower-income neighborhoods like the Rainier Valley. Certainly if bike sharing is going to be a vital part of the city’s transportation infrastructure, equitable delivery of service should be a top concern. But while much of the criticism of station locations is is well-intentioned, and equitable access to bike sharing could certainly be improved, any analysis needs to account for how bike sharing operates in practice.

To understand this problem, it helps to think about the kinds of trips bike sharing is used for. Washington, DC’s Capital BikeShare provides some great data about their system usage. One of the key take-aways is that most trips are one-way: pick up at one station and return at another. The pricing structure of bike share systems encourages short trips, further incentivizing this behavior. Renting a bike for a couple of hours while you go run errands or meet someone for lunch gets rather costly. Car2Go uses a similar pricing model: one designed to get the vehicles back into circulation as quickly as possible.

Therefore, a single Pronto rack next to, say, the Columbia City Link station, would likely be underutilized*. An effective bike sharing system requires a relatively dense mesh stations within a mile or so of one another. To get the ridership levels you need within that service area, the overall population density across the entire network has to be moderately high. This is why it works well in cities like London, Paris, and DC, with a relatively uniform density per square mile.

One major factor working against the expansion of bike share in Seattle (besides the hills) is the “urban village” strategy we’ve adopted to handle growth. By concentrating growth in dense nodes surrounded by a sea of single-family housing, we’ve created a non-uniform density pattern that limits bike share’s potential expansion (this also presents challenges for effective transit, but that’s an argument for another day).

That’s not to say that bike share programs can’t be made more equitable or accessible. Philadelphia is doing some interesting work removing barriers to payment, for example. And to the Mayor’s credit, he is planning to expand Pronto out to the Central District in his 2015 budget (the CD’s status as a lower-income neighborhood is also an argument for another day – but the adjacency to the existing network makes it an easy add).

Making bike share work in the Rainier Valley (or North Seattle, for that matter) would require more than installing a single bike station next to each light rail station. It would be require dozens of bike stations peppered throughout the area. And until the Valley (or the North End) gets much denser, that would probably be a money-losing proposition. Which is not to say that it shouldn’t be done! From an equity perspective it may be perfectly justifiable to expand access through subsidy, but that’s the conversation we should be having.

—
* Bike sharing can be successful for extending the walk shed around a transit station (54% of Capitol BikeShare trips start or end at a transit station) but it requires multiple rental stations to be effective. Adding more bike racks and lockers and Link stations is probably a better way to support last-mile access in Seattle, at least for now.