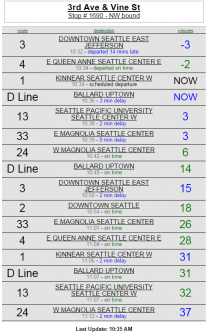 Various anecdotes coming in this morning suggest that OneBusAway is finally fixed, after over a month without real-time data on many key routes. Furthermore, the software will accurately reflect holiday schedules in the future. Spokesman Bruce Gray explains:

We put a new build up at 7 a.m. that so far appears to fix the major issues we had been seeing. Turned out to be a compression problem on a couple files.

While there were many aggravating aspects of this rollout, not least the lack of information before I asked for it, the good news is that Sound Transit is executing a program of actually improving OneBusAway rather than letting it stagnate.

Meanwhile, King County announced a new region-wide trip planning app this morning. which will include real-time arrival data. We’ll have a review of it next week.