25 years ago, to pick a round number, “downtown” Seattle was small. The 12-block “JCMSUP” area contained the overwhelming majority of downtown jobs. Commuters could be easily served by an express bus that got off the freeway and made 4-5 stops.

Since then, downtown has grown, as you can see from the Downtown Seattle Association’s map below. What was once a unipolar downtown is now multipolar, with several distinct sub-areas – like a big city! All this growth sets up an interesting and difficult challenge for transit planners as downtown grows. One recurring theme in David’s coverage of the Metro U-Link restructures has been the tradeoffs involved in providing frequent service to Seattle’s downtown and adjacent neighborhoods. 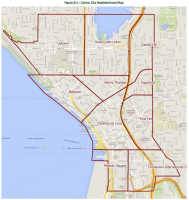 Recently, we looked at Commute Seattle’s 2014 report on transit usage for downtown commuters. The headline number – that just 31% of commuters drive alone – got a good deal of attention. The fact that a city with a relatively small rail system can get that many people out of their cars is a testament to excellent work done by the agencies, the city, businesses, and partners like Commute Seattle.

When we dive deeper into the data, though, we find that drive alone rates vary greatly among different downtown neighborhoods. Just 23% of workers in the commercial core drive alone, compared with more than double that in peripheral downtown neighborhoods such as  South Lake Union (46%) and Lower Queen Anne (53%). Large employers help as well, as they generally have trip reduction programs and give out free ORCA passes and the like. Then again, Amazon employees have free transit passes too.

The poor performance of these neighborhoods shouldn’t be too surprising since they lack the same peak express service enjoyed by the commercial core. If you live south of downtown or on the Eastside, all transit commutes to SLU require a bus or streetcar transfer. Most ‘direct’ service to SLU skirts its periphery on its west (Aurora and Dexter) or on its east (Eastlake/Stewart). Only if you live in Downtown (Streetcar), Capitol Hill (8), Eastlake (70), Fremont/Ballard (40), or parts of SR 522 (309) do you enjoy the front-door service that most other Downtown commuters enjoy.

So how might we better serve this multipolar downtown, with its quarter million jobs, so as to get more people in the fringes of downtown using transit?

One option is to run more express buses to each of the poles. Call this the Pill Hill Solution. By sharing costs with the large hospitals on First Hill, Metro provides peak express buses that go directly to First Hill from Lake City/Wedgwood (64), Federal Way/Tukwila (193), Shoreline/Northgate (303) and Kenmore (309). This strategy has resulted in a respectable transit mode share of 38% and a drive-alone rate of 40%. It’s not as good as Belltown, but it smokes SLU and LQA.

Alas, the Pill Hill Solution doesn’t scale (as the tech guys like to say). Having one express bus leave the Kenmore Park & Ride for downtown, another for First Hill, the next for South Lake Union, and a fourth for Lower Queen Anne would mean a lot of wasted service hours and a lot of empty buses headed back North on the freeways. It also means less frequent service, since only every fourth bus is going to a given destination.

Another option is to have express buses that serve the entire expanded downtown. We can imagine an express bus that gets off I-5 at Mercer, serves SLU, Downtown, and terminates in the ID.  As David recently wrote, Metro’s restructure does create some new options in this regard with the 64 and 66 going through SLU and then into First Hill from the North, while the peak-only 311 takes riders from 520 to SLU and LQA via Mercer.  This is an interesting solution, although it has the potential to be really slow and unreliable traversing the entire Mercer-to-Jackson core during peak.  We’ll have to see how it plays out. 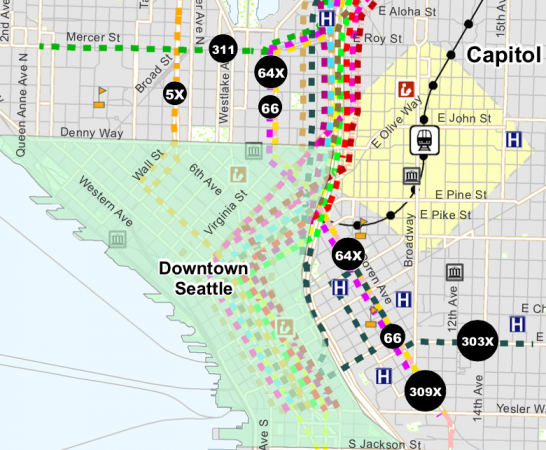 The third option is to introduce more commuters to the wonderful world of transfers. Transfers are a tough sell, because most transfers, especially between buses, are terrible. Wait times can be unpredictable, protection from the weather is often nonexistent, and a long wait between buses nearly guarantees that the journey will be uncompetitive with driving, time-wise.

Nonetheless, transfers are the best way to serve a multipolar downtown. Which means they simply have to stop sucking.  Metro’s Alternative 1 helps in this regard by providing more frequent transfer hubs.  Going forward, we’ll need faster, more reliable urban service, more cross-agency collaboration like we see at Mercer Island (and hopefully at UW?), and more capital expenditures to make the transfer experience more pleasant. Oh, and more rail would help, too (or rail-convertible bus tunnels), especially connecting these close-in neighborhoods.

166 Replies to “Designing Service for a Multipolar Downtown”