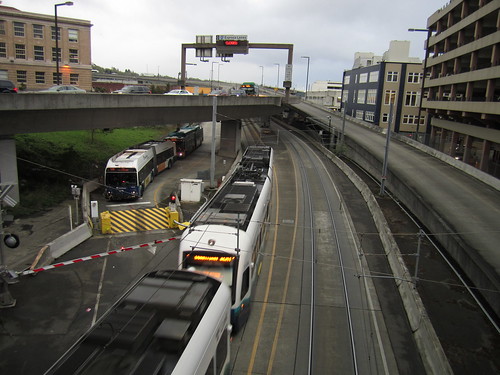 Our transit system, like any other, has many problems. Many will cost a lot of money to fix, or will require the political will to basically ignore the perceived interests of drivers. But a few of them are the result of nearly inexplicable agency policies. The delays and inconvenience are small in the scheme of things but they communicate to riders that their time isn’t valuable. As with any internet listicle, I wouldn’t get too excited about the precise rankings below:

5. Missing or inaccurate real-time data. Brian Ferris and Caitlin Bonnar detailed the technical problems with Metro’s data in January. Real time information is absolutely critical to a decent experience when riding unreliable transit, even at moderate frequencies, and quite useful even with frequent and reliable modes. Data problems degrade it considerably.

At least Metro exports their data; Community Transit still isn’t sharing it with onebusaway (OBA). And as for Sound Transit…

4. Misused electronic signs. The wonder of electronic signs is that they can change dynamically to reflect real-time conditions, but the ones in the Downtown Seattle Transit Tunnel (DSTT) are almost entirely wedded to canned policy announcements. OBA data, or even Sound Transit’s Twitter feed, would provide much more useful information to users.

Elsewhere, the offense is too much “information” rather than too little, which obstructs attempts to gather critical knowledge with a glance. On a train, it’s “Next Stop: Pioneer Square Station”, as if just scrolling “Next Stop: Pioneer Square” would confuse anyone. The real-time arrival signs at Rainier and MLK, which support two lines of text, (slowly) show the next 5 or 6 arrivals of Route 7, meaning you often find out about the one coming in 55 minutes well before the one coming in three. And of course, last football season, riders that might run for it if it was indeed, say, Route 28 coming down 3rd Avenue got to read “Go Seahawks” instead.

3. Tunnel Clutter. Complain as I might, it’s hard to blame Metro for wanting to get as many buses as possible off 3rd Avenue and into the DSTT . What’s harder to defend is running peak routes through it, adding stress at the time of maximum congestion.*

Moreover, although it’s Metro policy to sequence buses at tunnel entry points to align them with the bays, anecdotal experience suggests that the policy isn’t very successful. Southbound, for instance, I-90 buses often force the South County buses to loiter before a station, meaning that we need two cycles to service buses that could easily serve the whole platform in one cycle.

Last but not least, security clears each train at Westlake while it sits at the platform, rather than at the turnaround point. It’s yet another frittering away of the one of the system’s most precious resources: tunnel platform time.

2. Exiting at the front. This one isn’t as much on the agencies as the riders, although official attempts to encourage compliance have been halfhearted. Some people legitimately must exit at the front door, and at quiet stops it doesn’t matter. But at busy downtown stops with lots of people exiting and boarding, the failure to circulate properly congests operations.

1. Operator Changes in the Peak. A quick staff poll revealed that nearly everyone has their own story of this happening. Metro often switches out drivers at central locations during rush hours , so that as many people as possible get to watch the drivers exchange pleasantries, switch our their bags, and prepare for a long shift.

The apex of this annoyance, however, is the Link operator change, which not only often occurs during the peak, but also at a special stop. The train decelerates to a stop on an elevated segment where it out to be going at full speed. The alternative would be driving, biking, or walking the half mile to Sodo Station where the train will have a scheduled deceleration and stop anyway.

* A problem that is, thankfully, going away as part of the U-Link restructure.