by ZACH STEDNICK and MICHAEL LOGSDON

When WSDOT ferries make the news, the press seems to focus on fiscal issues, rather than the logistical aspects of the ferry system. We wanted to remedy that and answer the question – are ferries generally on time?

We filed a Public Records Request with WSDOT and here we present findings for on-time rates for calendar year 2014, with a focus on the difference between actual and scheduled departure times. For simplicity this analysis only considers Puget Sound region ferry routes (i.e. non-San Juan Islands routes). Also, because WSDOT runs a holiday schedule on most Federal holidays, we specifically accounted for those dates.

Overall we find WSDOT Puget Sound region ferries to be very reliable. Over approximately 133,000 sailings throughout 2014, the average departure occurred 2.8 minutes after the scheduled departure.

In Figure 1, we used linear regression to add a trend line to visually show trends in departure time delay for all routes and then stratified those values by route of interest. As a whole, the data shows minimal variation in departure time with a modest bump in departure delay towards the end of summer. One aspect to note is that there are days that ferries left early enough ahead of schedule to bring the daily mean delay below zero, although it is unclear why this happened.

This is a slightly different plot with dot sizes representing delays by day with the dot color representing the type of day. Again we see the same patterns of delay as observed in Figure 1 but we can also see that certain routes (e.g. Seattle – Bainbridge Island) tend to have more delays on the weekend sailings while other routes (e.g. Keystone – Port Townsend) tend to have more departure delays during the week.

One could arguably say that Seattle – Bainbridge Island and Vashon – Fauntleroy are the two largest commuter ferries so we focused on those individually. WSDOT reports their ferry data on a route-specific level, which can lead to complications with data for the Fauntleroy – Southworth – Vashon route due to the three routes being interconnected. For this analysis these three routes were combined into Figure 3. 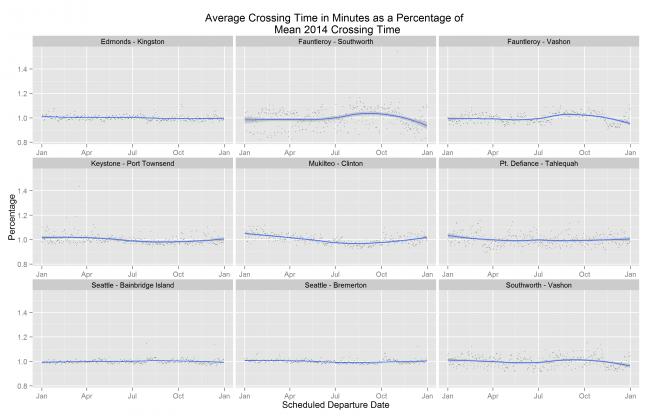 In conclusion, we observed that WSDOT ferries are generally very consistent and there is some ability to predict delays in advance (such as a summer weekend afternoon sailing). With the introduction of reservations and better online notification of ferry capacity, WSDOT is attempting to make for a smoother sailing experience while dealing with the rapid population growth that faces many other transit services in the state. Based on our observations, the ferry will almost always leave within 10 minutes of scheduled departure, the only question being whether you’re on it or not.