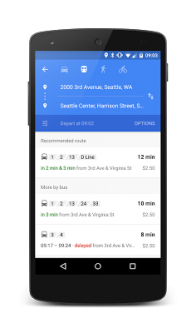 Once again, Brian Ferris, who created OneBusAway and works at Google had a major hand in making it happen. Via email, Brian says he’s “excited about the way Google is able to integrate real-time information into its trip planning features.”

Real-time means that Google not only knows the bus schedule but knows if it’s running on time or not. Combine that feature with Google’s already excellent trip planning, and you have a one-stop shop for determining what bus to take. “We are getting better and better about being able to tell you the fastest way between two locations given the state of the world,” Ferris said.

The upgraded Google Maps is coming to Android first and will appear soon on iOS.