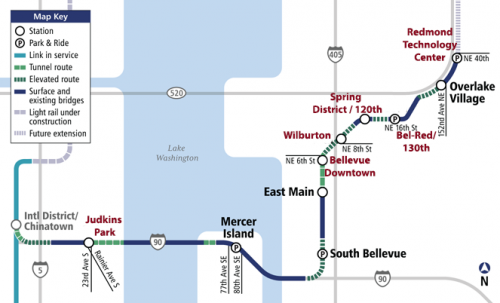 On Thursday, the Sound Transit Capital Committee approved permanent names for the planned East Link stations. Their recommendation will go to the Board for approval on June 25th.

Six of the ten planned stations have ‘new’ names. Names were selected after a public comment process with input from the cities. Sound Transit received 823 comments from the public and affected jurisdictions. Most notable was a suggestion that Rainier Station be renamed for Jimi Hendrix. The Committee instead recommended ‘Judkins Park’, but with a staff recommendation that the art and legacy of Jimi Hendrix be reflected in the station design.

Names also had to meet naming criteria established by the Board. They should reflect the nature of the environment, such as neighborhoods, street names, landmarks, or geographical locations. Names should be brief, easy to read and remember. They must comply with federal ADA guidelines and be limited to 30 characters. Commercial references are to be avoided because they may change. Similar names or words in existing facility names should also be avoided.

The Committee approved an amendment from Mayor Claudia Balducci to reverse the names for some stations in Bellevue so that they not start with the numbered street name first. Putting the numbers first would have created wayfinding and legibility issues.

So, drumroll please, here are the approved names, and some runners-up from the public input process: