Amid the general hand-wringing about growth in Seattle lately – be it from Danny Westneat, Crosscut, or innumerable KUOW radio hours – there has been no shortage of discussion about the relative lack of transit service in South Lake Union. A combination of fewer transit options, abundant parking, and an affluent workforce have yielded a drive-alone rate in SLU (46%) that is more than double that of the traditional downtown core (22%). Though no one would argue that transit has kept up with growth, our agencies are working hard to catch up, with many potential projects to address the problem:

Aside from an ST3-funded subway – a line at least 15 years away if all goes well – the good projects above still generally tinker around the margins while continuing to treat SLU as a peripheral neighborhood. But SLU deserves transit service befitting what it has become, which is the northern half of Downtown. That means a lot of peak bus service, at least until 2023.

But if you look at the current peak network operated by Metro, Sound Transit, and Community Transit, you could be forgiven for thinking that the respective agencies still view SLU primarily as layover space for buses. Aside from Route 309, the closest any I-5 buses get to SLU is the view they get from I-5 while slogging towards Stewart Street. From the south, it’s much the same, with all routes petering out in Belltown or Denny Triangle and either deadheading back to base or laying over. From the eastside, the 554’s routing is particularly disappointing, with the last stop on 4th/Lenora in Belltown, from which it then deadheads into SLU to layover. Despite all the growth, the peak network still acts as though Downtown ends at Stewart. And of course, Mercer Street has no transit at all.

A perfect storm is brewing, with massive growth in north Downtown and SLU, Convention Place likely closing a couple years early, ever fewer buses in the tunnel, too few Link vehicles to mitigate lost tunnel capacity, and progressively degraded surface transit pathways. We need more transit, and we need more surface right-of-way (ROW), especially in booming Denny Triangle and SLU. Fortunately, these two neighborhoods have two wide arterials that are not choked with traffic, have a direct connection to the I-5 express lanes, and could have a relatively uncongested pathway into Downtown: Fairview and Virginia.

Here’s how it could work. 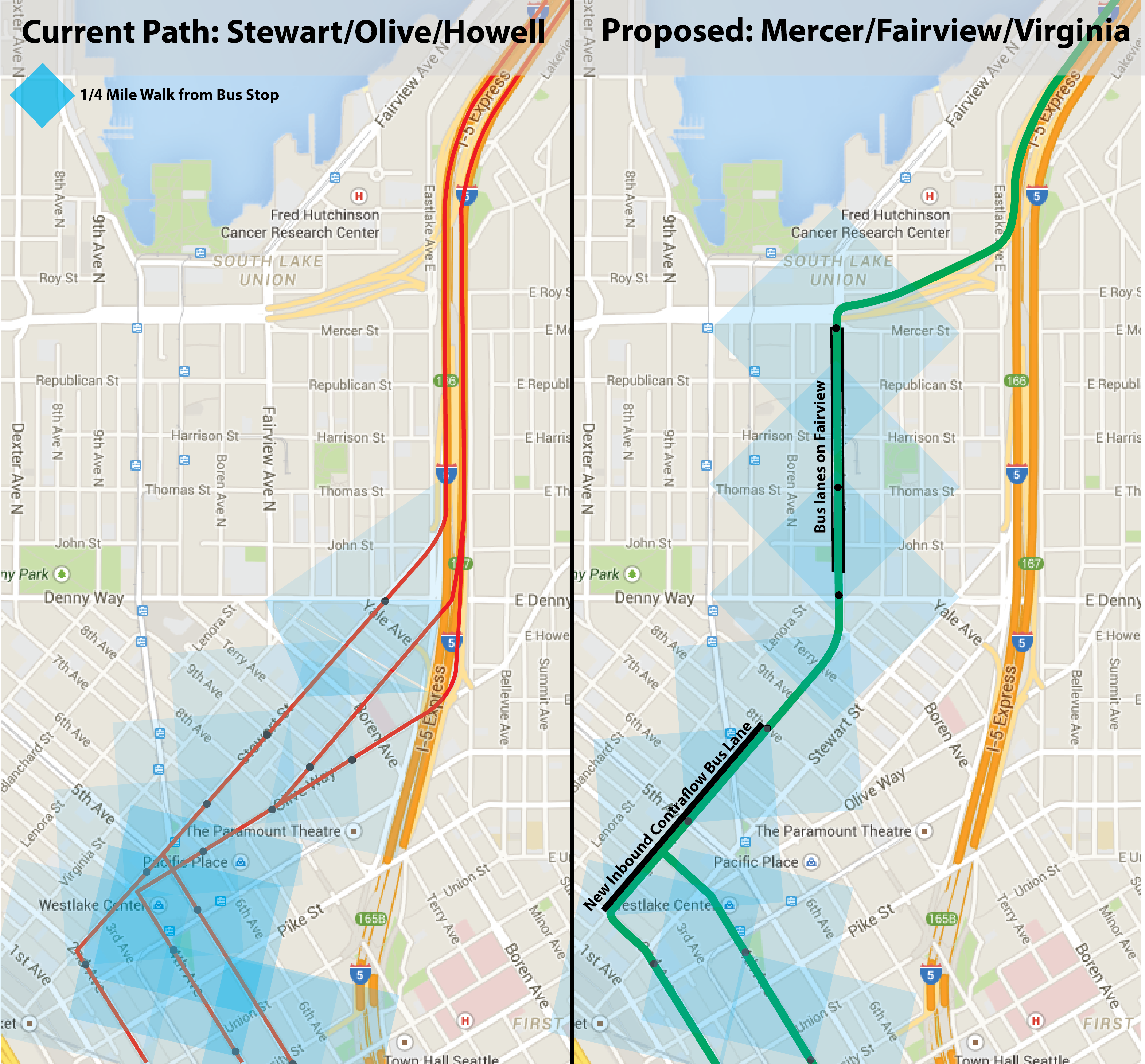 Between Mercer and Denny, Fairview is 84′ of ROW, with 56′ available for travel lanes. It is your standard late-century 5-lane arterial, with two travel lanes in each direction plus a turning lane. Converting the outer lanes of Fairview to BAT lanes would be relatively easy, as they are currently used off-peak for parking.  At Mercer, Fairview also has the rarity of enjoying double turn lanes to/from I-5, in both directions (see here and here). Could we take one of them for transit?

South of Denny Way, as Fairview forks into Boren and Virginia, things get a bit more complicated. From Boren to 8th Avenue, Virginia is a two-way, 66′ minor arterial, with 42′ available for travel lanes. Currently it has two eastbound lanes, one westbound lane, and one westbound parking lane. West of 8th Avenue, Virginia is a one-way, 5-lane eastbound arterial, with 2 parking lanes and 3 travel lanes.

Eastbound on Virginia, a curbside bus lane could shift to the interior lane at 8th Avenue, with no stops between 8th and Denny, allowing buses to proceed straight to Fairview while cars queue in the right lane for I-5 via Boren and Howell (see second image below). Westbound on Virginia, this proposal would simply extend the westbound lane from 8th Avenue to 2nd Avenue as a transit-only contraflow lane (see fourth image)

Points against:
The point of this proposal is to think hard about surface transit pathways in greater Downtown, and to recognize that whatever our success in building out our urban and regional rail network, that surface bus transit will remain vitally important and should not be neglected. This proposal attempts to carve out new capacity from surprisingly underutilized streets, and whatever its merits, I hope that our agency planners think creatively about better serving our booming job centers.