Here in the Puget Sound region we are blessed with hundreds of miles of regional bike trails, from the paved non-motorized highway of the Burke-Gilman Trail to the smooth dirt of the Snoqualmie Valley Trail. But nearly without exception, our trails are a series of disparate pieces. They peter out in random places, their right-of-way subsumed by some long ago development, or they are constructed in torturous phases, waiting for further crumbs to fall from the appropriations table.

But what if they all connected, every last one of them? What if they offered a comprehensive network from Anacortes to Enumclaw, and from Gig Harbor to the Columbia River? We’re closer to this vision than you might think. To qualify, each trail segment could be paved or soft-surface, but the important thing would be to remove discontinuity, detours, or sections in busy traffic.

I’ve put together a draft* of a highly stylized map that weaves together each of the disparate strands into something resembling a seamless network. Fully built, this would be a national gem of a trail system, stretching 915 miles across coastal wetlands, river valleys, mountain passes, pastoral landscapes, and bustling urban corridors. 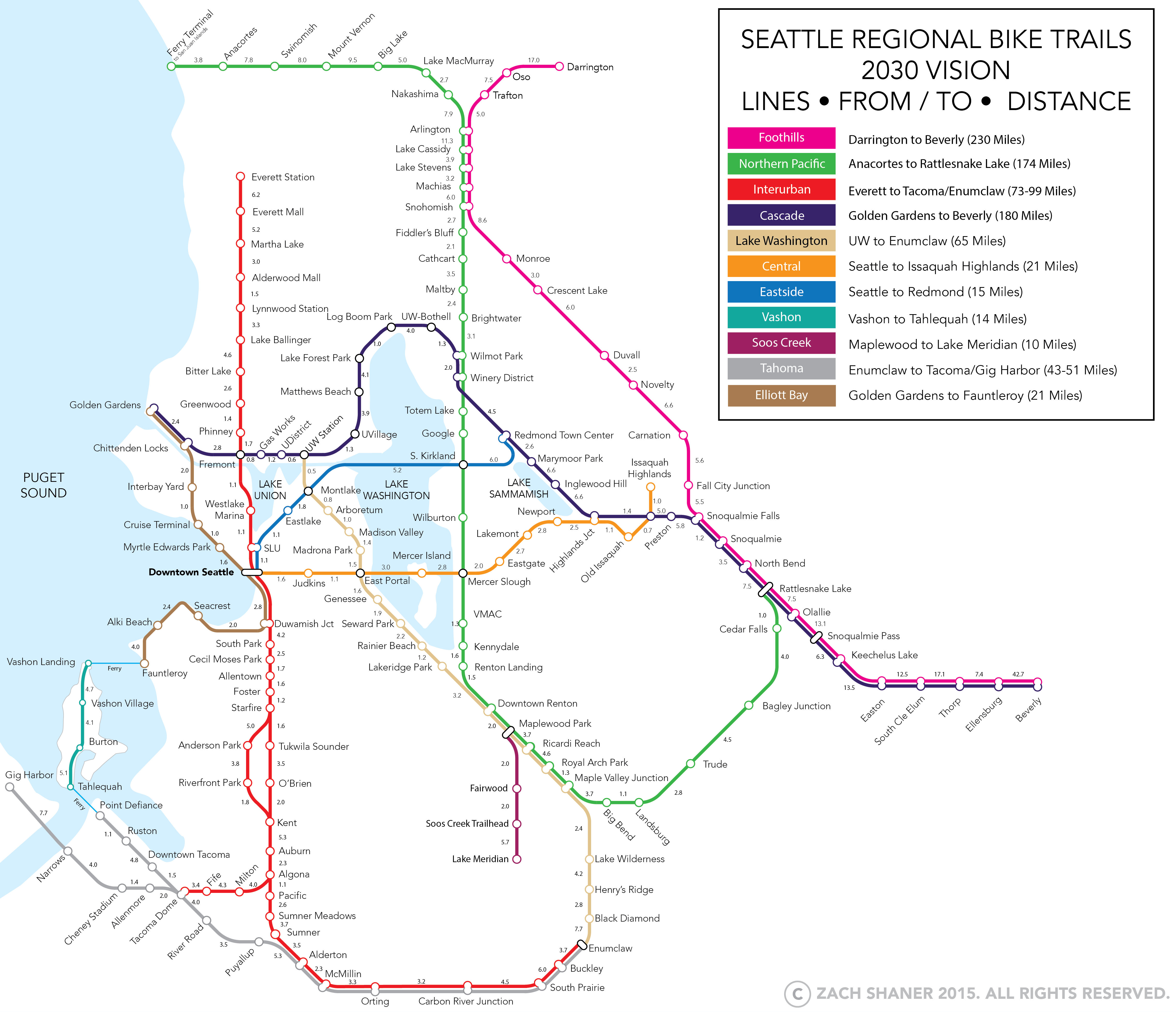 Cascade Line: Did you know that just 3 miles separate us from a continuous 180-mile trail from Golden Gardens to the Columbia River? Only three (expensive) pieces remain: the endlessly litiguous Burke-Gilman Missing Link, the closed trestle connecting the end of the Preston-Snoqualmie Trail to Old Snoqualmie, and the closed (but still standing) Renslow Bridge over I-90 between Ellensburg and Vantage.

Foothills Line: From the Stillaguamish River Valley in Darrington to the desert near Vantage, we’re just 32 miles short of a 230-mile trail, with gaps from Oso-Arlington and Snohomish-Duvall.

Interurban Line: How about a bike version of the Everett-Tacoma spine? On the “Interurban Line”, we’re just missing the stretches from Bitter Lake-Downtown Seattle, Algona-Milton, and Fife-Tacoma. A spur along the Green River Trail adds variety, and three short connections (Pacific-Sumner Meadows, Sumner-Alderton, and South Prairie-Buckley) are all that stand between a continuous path from Everett to Enumclaw.

Northern Pacific Line: So close yet so far. This line imagines a continuous trail from the Anacortes Ferry Terminal all the way to Rattlesnake Lake near North Bend. Much of it is either built or in planning, namely the Centennial Trail from Skagit County to Snohomish, the Eastside Rail Corridor from Totem Lake to South Kirkland, and the Cedar River Trail from Renton to Maple Valley.  But much remains for this trail to become a reality, including Anacortes to Arlington, Snohomish to Woodinville (planning on hold), an upgrade to the signed Lake Washington Loop route from South Kirkland to Renton, and an unlikely reopening and trail conversion of the Milwaukee Road in the Cedar River watershed.

Lake Washington Line: Imagine if Bicycle Sundays were Bicycle Everydays. From the UW Link Station and the planned Arboretum Trail, imagine a full-time connection down Lake Washington Blvd to Renton, where the line could intersect with the Northern Pacific Line.

Central Line: This line is almost done! From Downtown Seattle to Issaquah Highlands, we just need a better connection from Downtown the the Mountains to Sound Greenway, and a (planned) upgrade of stretches near Eastgate and Newport Way.

Eastside Line: From Seattle to Redmond, we’re also well on our way. We’re less than two years away from a continuous path from Redmond to Montlake over 520. A smart connection between the 520 bridge and Eastlake, along with the planned upgrade to Eastlake itself in the Bicycle Master Plan, will give us a bike-friendly technology corridor unlike any other.

Elliott Bay Line: Again, what if you could ride from Golden Gardens to Fauntleroy along Elliott Bay traffic-free? With some attention paid to the connection between Shilshole and the Interbay Trail (either over the Locks or via an upgraded Ballard Bridge), and upgraded bike facilities between Alki and Fauntleroy, this trail could be fully realized.

Tahoma Line: The Tacoma Narrows and Commencement Bay offer some of the most underrated riding in the region. With upgrades between Downtown Tacoma to Puyallup, you could ride continuously from Gig Harbor or Point Defiance to Enumclaw through the Puyallup and Carbon River valleys.

Vashon Line: This is one so lightly trafficked that maybe it doesn’t even need upgrades, but I thought it warranted inclusion due to the awesomeness of the bike and ferry loops it enables. My favorite lazy day loop is the Vashon Water Taxi, a ride down the island, the Tahlequah-Point Defiance ferry, a ride from Ruston to Tacoma along Commencement Bay, and then Sounder home.

Soos Creek Line: A short spur off the Lake Washington and Northern Pacific Lines, this connects the Cedar River up into the highlands of Fairwood and Kent East Hill, allowing for a continuous ride down the underrated linear Soos Creek Park.

Here is another map roughly showing the disconnectedness of our current network. What do you think it would take to fill it in? Who wants to help get behind a movement to do it? 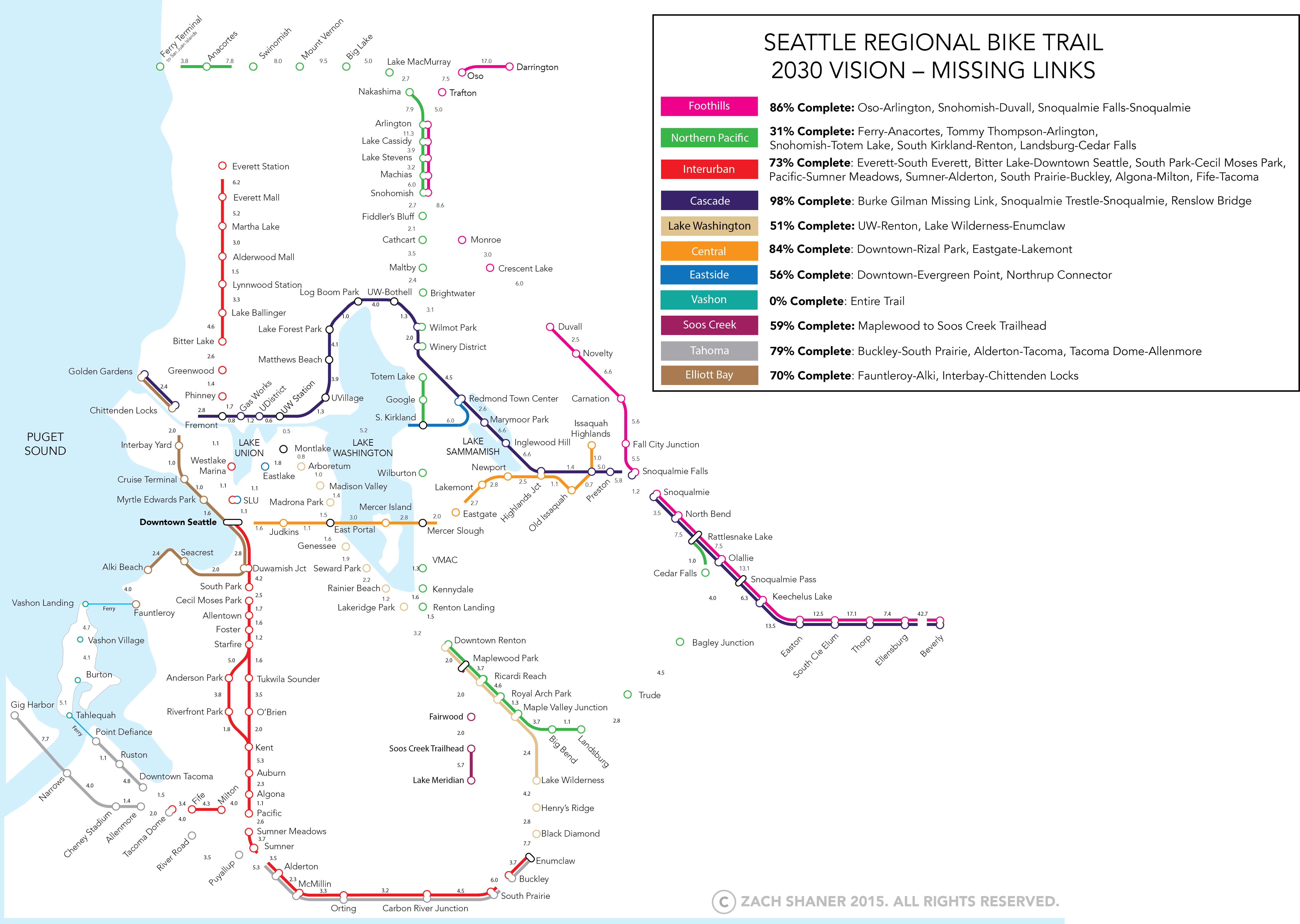 *This first draft likely has many errors, omissions, or other problems. Please let me know what I’ve missed!