Zach pointed out last week the major flaw in Metro’s proposal for an otherwise praiseworthy restructure of southeast Seattle bus service. The restructure features a re-route of route 106 to head up MLK Way north of Rainier Beach Station to Mt Baker Station, then up Rainier Ave to Jackson St, and on over to 4th Ave. It will cost roughly $2.5 million per year for the portion of new route 106 that duplicates route 7, from Mt Baker Station to 4th Ave.

There are a lot of other service investments that just got pushed back in line by this apparent circumvention of Metro’s Service Guidelines. But in addition to the line in which the 106 downtown extension just cut, there is also a call on the new money by a report that has collected only two years of dust. 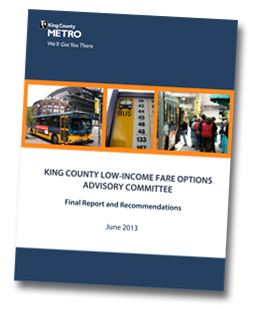 Recommendation #6 from the Final Report and Recommendations of the Low-Income Fare Options Advisory Committee was “A low‐income fare program should be considered as a beneficiary if the County has new or increased revenue.”

Metro has now revealed that it has expanding revenue — enough to propose at least $2.5 million in annual new service, beyond what is being funded by Seattle’s 2014 Proposition 1. How much fare relief could $2.5 million provide for youth and low-income riders (who pay identical fares)?

A report recently put out by Metro showed roughly 3% of boardings on Metro were paid for by ORCA LIFT (low-income) cards in September. Perusing quarterly ORCA Joint Board Program Management Reports for the past year shows youth boardings hovering around 6% or less of all boardings. Summer youth boardings dropped off substantially in 2014, but less so in 2015.

Let’s presume youth/LIFT boardings collectively climb to 10% of all Metro boardings in 2016. With 120 million Metro boardings a year, that is 12 million boardings where Metro would stand to lose money from a youth/LIFT fare decrease. If the fare is dropped by 25 cents, Metro could lose as much as $3 million in fare revenue. However, once passes and transfers are accounted for, the hit would be pretty close to $2.5 million. Metro has now admitted they have the money to do that, if that is the county council’s pleasure.

Throw in a grand bargain in which the county agrees to make the youth/LIFT fare a half-fare or less, in perpetuity, in exchange for getting rid of paper transfers, and nearly every rider on Metro would see a positive difference in Metro service.