Sound Transit 3 (ST3) kicked off in earnest today with a Sound Transit Board Workshop. The bulk of the information involved more detailed corridor studies to further assess various alternatives against the criteria the board set out. However, there was also an interesting look at the benefits of expanding the package from 15 to 20 or even 25 years, as well as absolutely fascinating operational concepts for the final system. We’ll have a much more detailed look at financial models and operational concepts in the coming days, but here are some project highlights.

In the charts below, the five metrics we’ve shown are Spine (Yes/No), daily ridership, capital cost, annual operations and maintenance cost, and travel time for that segment. Click on each image for full details. 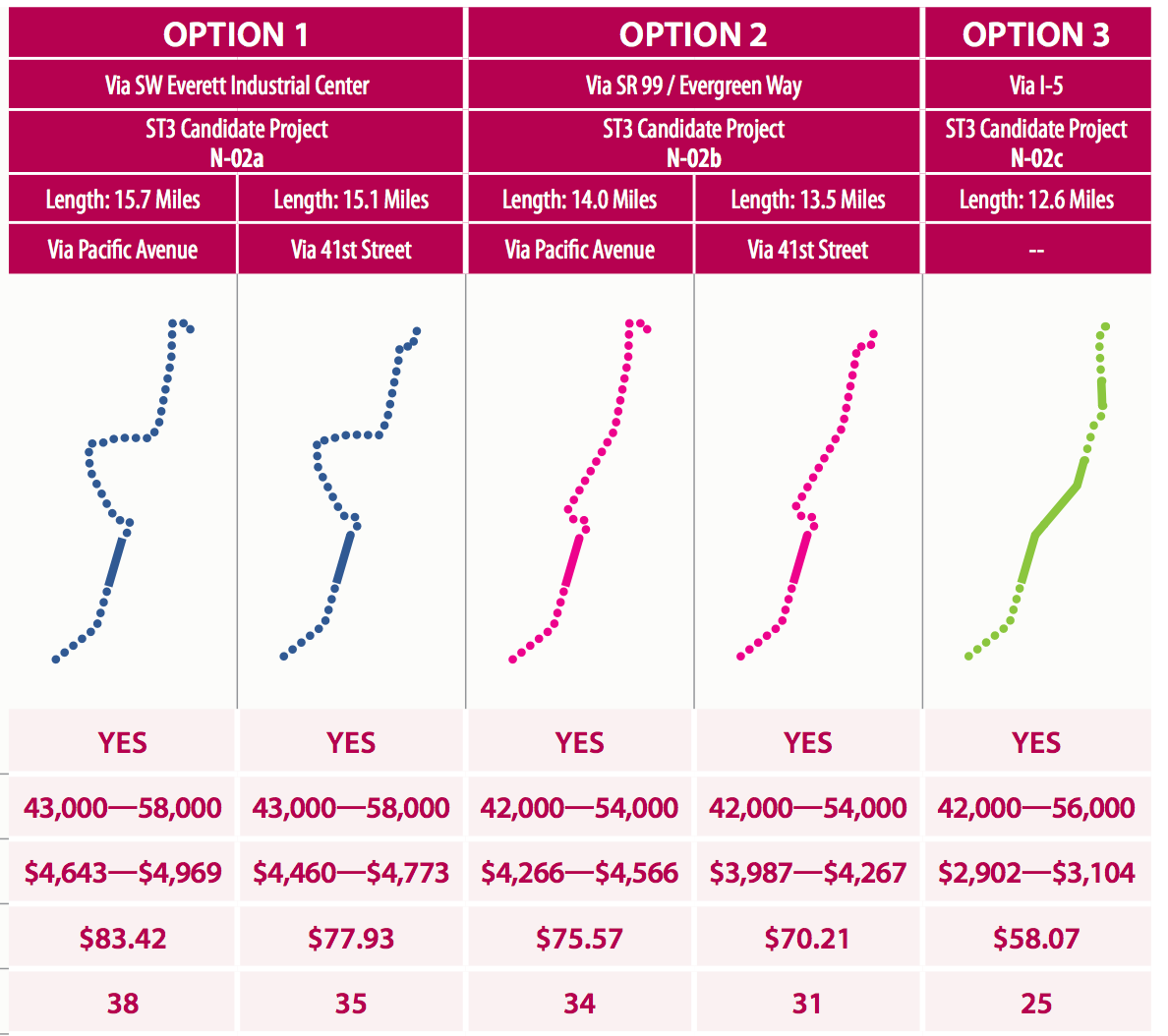 Three main options were presented for getting to Everett, via Paine Field (N2A), SR 99 (N2B), and I-5 (N2C). There were few surprises for observers of last year’s corridor study. 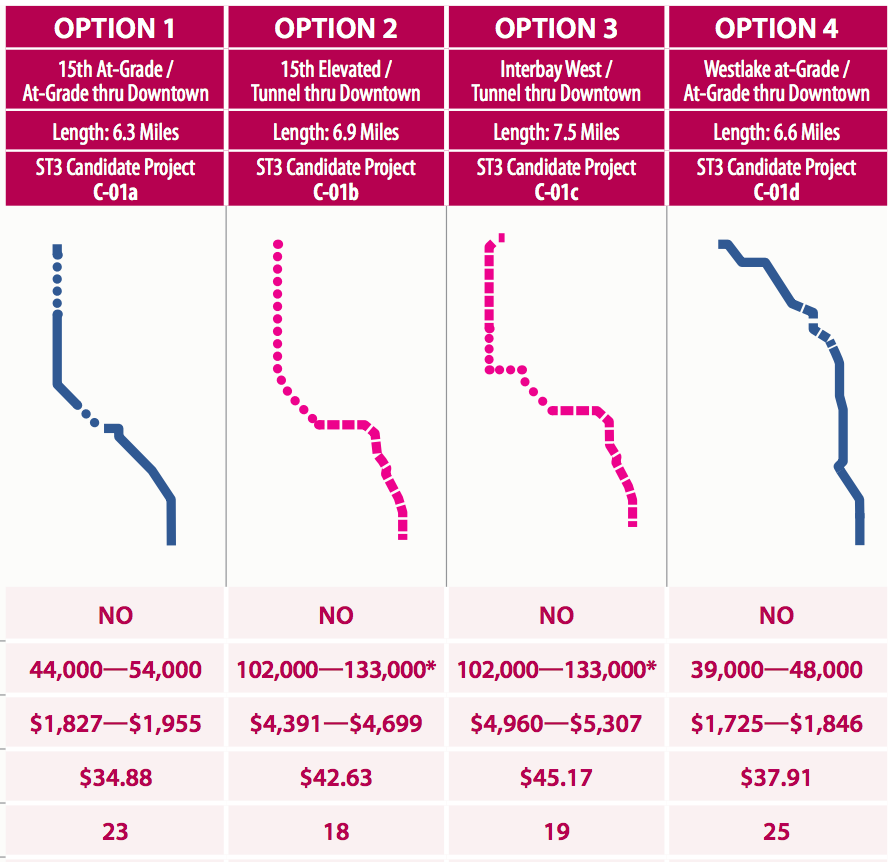 Four options were presented for Downtown to Ballard. Option C1A is a fully at-grade line that would reach Downtown via Interbay, Belltown, and then be interlined with the Center City Connector (CCC) on 1st Avenue. Option C1B is fully grade separated, elevated from Ballard to Lower Queen Anne and tunneled through South Lake Union and Downtown. Option C1C is identical to C1B except for running through the west side of Interbay rather than along 15th Avenue West. Finally, Option C1D is the “Westlake Rapid Streetcar” option, which like C1A would also interline with the Center City Connector on 1st Avenue.

The grade separated options accept SDOT’s suggestion for a South Lake Union at Westlake/Denny, although they treat SDOT’s other station requests (SR 99/Harrison and W Newton Street) as separate projects.

In a departure from ST’s Conceptual Studies from last April, there is no longer an at-grade option for Ballard that includes a new Downtown tunnel, as ST has determined that due to the elevation of any Lower Queen Anne tunnel portal, descending to at-grade only to elevate again over the Ship Canal is actually more operationally complex than a pure elevated line. 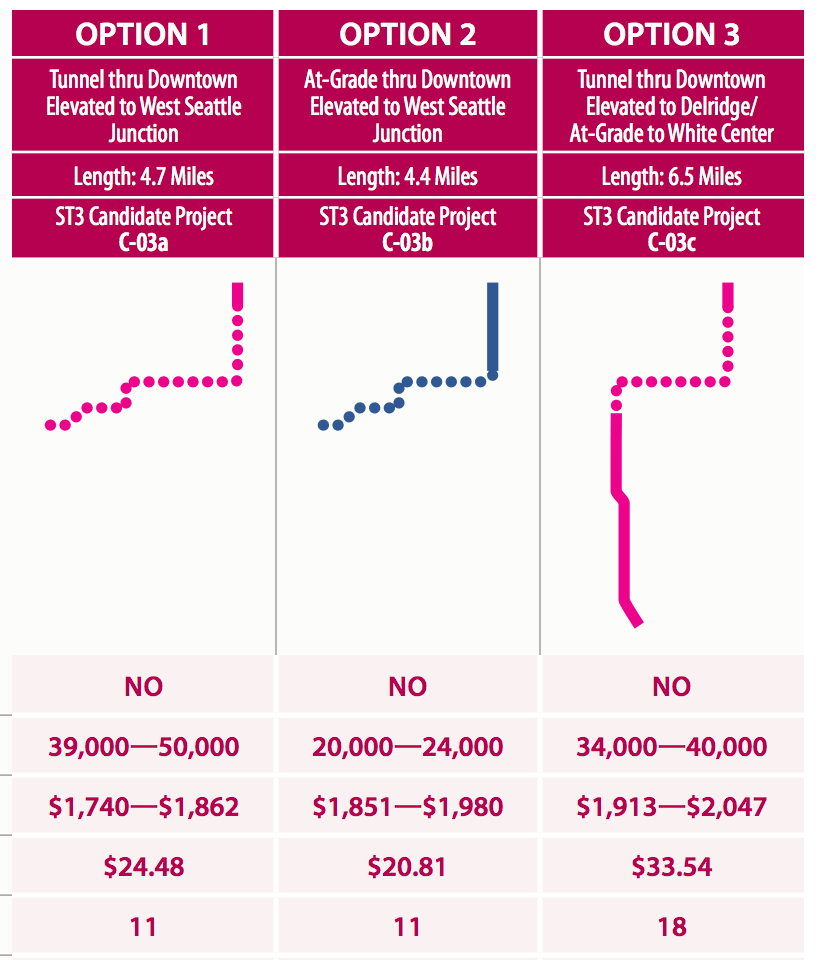 Perhaps the most sure thing in all of ST3, the Overlake-Redmond segment of East Link is included as Project E1, but with a new station shown near Marymoor Park. Ridership is 8,000-10,000 and comes in at $1B with a travel time of 8 minutes.

Frustratingly, there’s no direct comparison between BRT on the Cross Kirkland Corridor (E6) and Light Rail (E3) on the same span. Both connect to East Link at Wilburton, and Link continues on to Issaquah. Alignment details aren’t cast in stone yet, but failing to directly serve Downtown Bellevue in the Link alternative seems like an early unforced error that can and should be fixed.

All four I-405 BRT alternatives perform better than the Cross Kirkland Corridor projects. Yet interestingly, the study found no ridership difference between the high-investment and low-investment scenarios, apparently discounting the possibility that reliability would impact ridership. Ridership is 13,000-18,000 no matter whether ST spends $300m (Option E2A+E4) or $2.1 B (Options E2B+E4). 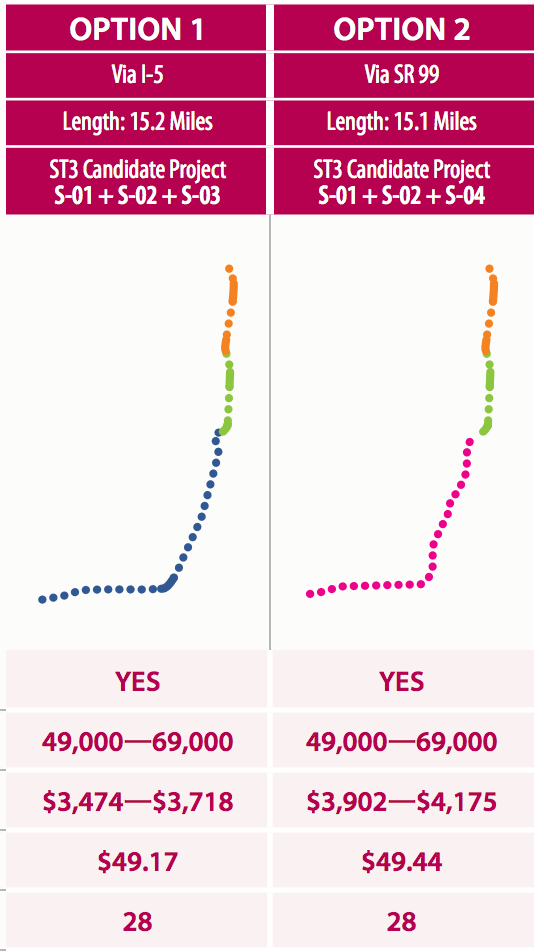 Including the unfunded segments from ST2, the study looked at I-5 and SR 99 alignments from Federal Way to Tacoma. Using SR99 adds nothing but cost because the two roads are so close together.

It’s barely a “study,” because all the numbers depend on BNSF negotations, but ST Executive Ric Ilgenfritz told us that expanded South Sounder would have the intent to move towards hourly all-day and evening service. The project would probably involve a third track to avoid freight conflicts. “We have enough train sets to do hourly, and once the track’s there it’s not that expensive to use the trains as much as you can.” Along with more Sounder runs, bigger platforms, Tacoma Link to TCC, bus reliability projects deep into South Pierce County, station access improvements are all under consideration.

Over the next week or so, we’ll describe interesting operations and transfer concepts in store for Link, Tomorrow, we’ll discuss the finance options, and we’ll dive into some interesting  study results in more detail.

*A major caveat here is that the Ballard ridership numbers include significant network effects and different operational scenarios for a 2nd Downtown tunnel, something we’ll be writing about in the coming days.