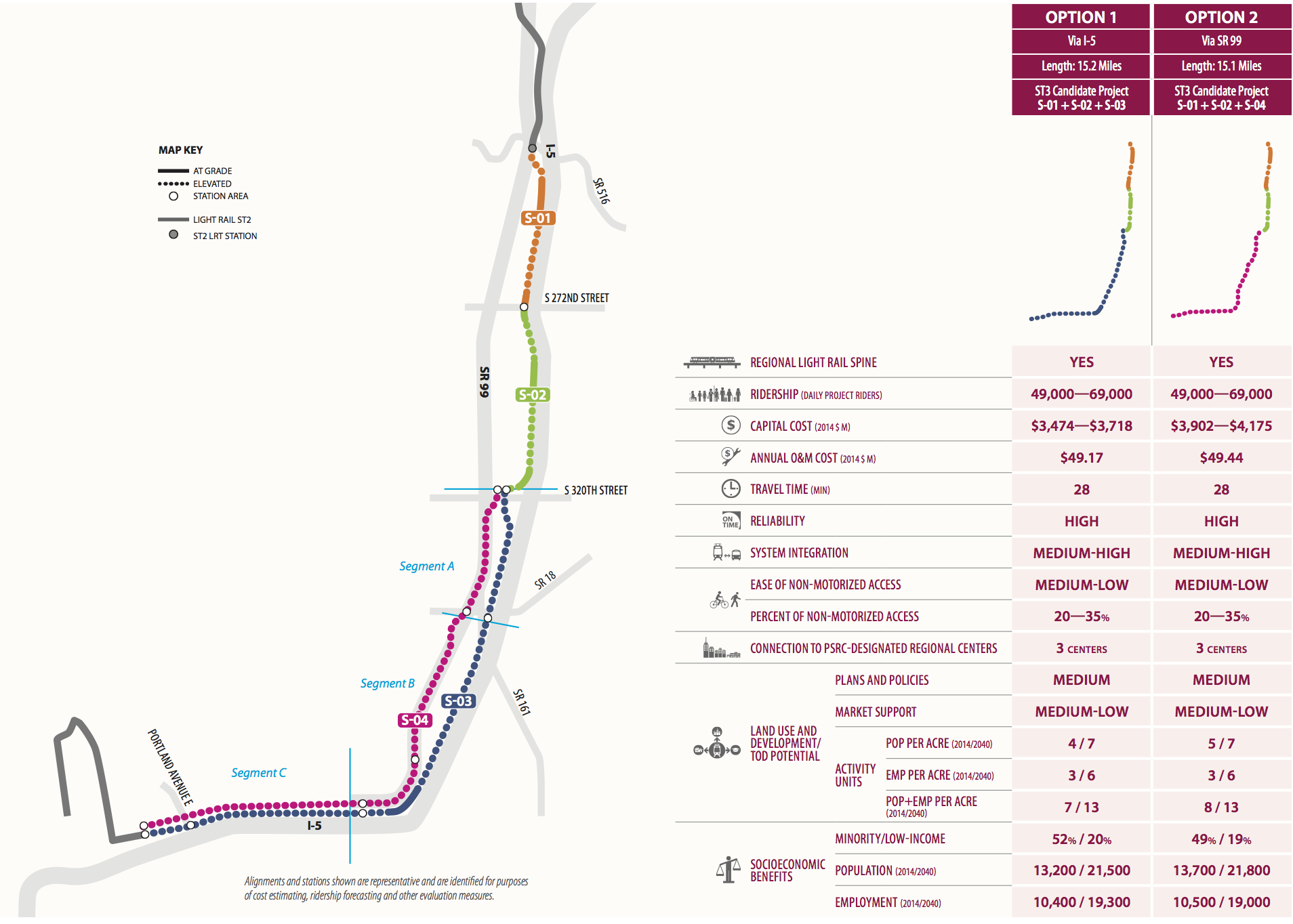 At every opportunity, STB has pushed to run Link on SR 99 instead of I-5.   SR 99 offers a better walkshed from the station, more transit-oriented development (TOD) potential, and better interfaces with local bus routes.  All of the things that are associated with all-day frequent service.

Alas, we lost all those battles in Shoreline, Lynnwood, and Des Moines, where local politicians and business interests were determined to keep light rail away from as many existing business as possible.

Once again I-5 and SR 99 are pitted against one another in Sound Transit’s proposal for light rail along the Southern section of the spine from Federal Way to Tacoma.  Unlike the situation further North, however, SR 99 and I-5 are very close to one another, and as you approach Tacoma they essentially become the same road.  As a result the tradeoff is not nearly as stark as in Snohomish County or even South King, and the I-5 alignment may actually be superior.  Here’s why.

Two options have advanced from the last round. Both have similar ridership numbers (49,000 to 69,000), but SR 99 comes in at a slightly higher $4.2B price tag (vs. $3.7B for I-5).  Sound Transit assumes that SR 99 would need to be rebuilt, even with an elevated alignment, so the price tag includes the cost of a new road.  Both options could involve constructing multiple parking garages along the route with a total of over 2,500 stalls (though ST notes that garage construction money could be put to other uses as local needs dictate).

Both alternatives include stations at Star Lake (S 272nd St), Federal Way Transit Center (320th St), South Federal Way, Fife and the Tacoma Dome. The I-99 alignment adds a sixth station in Milton, WA, while the I-5 alignment skips Milton for a station at Portland Avenue on Tacoma’s East side, providing closer access to the Port of Tacoma.  Hard to say how many port workers would actually use Link, but I’d guess that our regional powerbroker-types are downright giddy at the prospect of a PowerPoint slide showing a Port of Tacoma Station on their next economic development junket.

All in all, it surprises me to say that the I-5 alignment is superior.  In addition to the Port of Tacoma, a station at Portland Avenue would serve a seemingly walkable neighborhood on Tacoma’s East side and could connect to existing Pierce Transit bus service (PT Route 41), while the SR 99 station at Milton would need a parking garage and has a much poorer walkshed.  (Not to mention that the I-5 alignment could provide the long-awaited frequent rail link between the Emerald Queen Casino in Tacoma and the EQC in Fife!)  All for $500M less than SR 99.

So, in a cruel twist of fate, in the one section of the spine where there’s some local support for a 99 alignment (bless you, Fife), I-5 may actually be preferable.

ST also looked at an extension of the Link spine to the Tacoma Mall. It would generate 12,000 – 16,000 riders and cost about $1B, making it one of the more cost-effective light rail projects outside of Seattle.  An extension of the Tacoma Link streetcar (not to be confused with the Link spine, which is a different system) to Tacoma Community College fares even better, costing about $680M for an additional 10,000 – 14,000 riders.

ST is considering a whole host of South Sounder improvements as well, from all-day trains, to 8-car platforms, to general station access improvements.  The cost is TBD pending negotiations with BNSF. Extensions to Orting and DuPont were also evaluated.  Orting seems to be quite expensive for the ridership. DuPont fared a bit better, netting 2,000 to 4,000 riders for $300M.

Finally, several bus improvements in the South Sound area are also being evaluated, along Pacific Avenue and SR 161. Given that Pierce County is likely to have money to spend in ST3, these projects could end up in the grab bag as well.