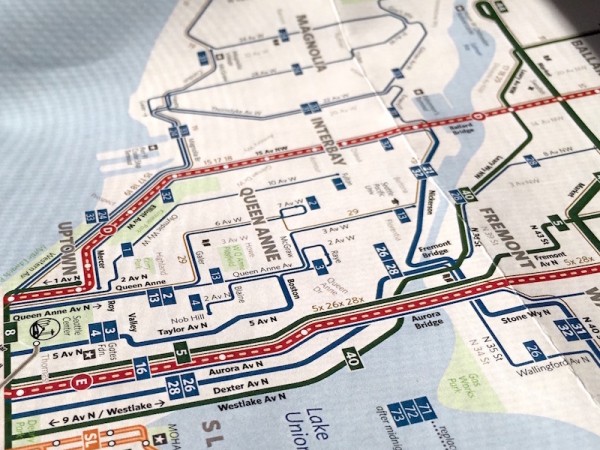 [UPDATE March 25, 2016] the March edition of the map is now available at seattletransitmap.com. Paper copies of the map are also available from SDOT, Transit Riders Union and Sound Transit. Please contact them for details on getting a map. Maps and posters will be available for purchase from the map’s website in the near future.

Not since the early days of Seattle Metro has there been a definitive map of transit in the city of Seattle. As Metro’s map expanded, the city became a smaller part in an expansive countywide network. Details were lost as the city was scaled down to make room for the county. Metro’s latest maps tried to correct that by creating larger scale subregional maps but there still is no single rider-oriented map that shows the city’s transit network in its entirety… Until now.

Today I am proud and excited to introduce to you a draft of my latest work in progress: the Seattle Transit Map and Guide, a map of transit for the city of Seattle. The Map features the entire network of frequent service, regular all-day service, and peak-only commuter service in the city, all on a single stylized-geographic map, plus a few specialized maps showing detail of busy areas or certain services. The Guide summarizes the frequency and span of all service in a few tables. Currently the Map and Guide depicts service effective September 2015; a draft depicting March 2016 service will be released when it is ready.

You can view the draft Seattle Transit Map in a mobile-friendly website. There is also a PDF for offline viewing. I am collecting your feedback on the content and design which may be given in the comments below or on the map’s feedback form. Your feedback will help refine the map to make it ready for publication in March.

Unlike the Frequent Map, it is not designed to be printed at home because I wanted to show more detail without making everything too small. In a pilot project with the Seattle Department of Transportation (SDOT) and the Transit Riders Union (TRU), we are aiming to distribute paper copies of the map for Metro’s big March 2016 service change in conjunction with the opening of U Link. In the meantime, TRU has paper copies of this draft available for anyone who would prefer to give study and give feedback on a handheld copy. Though to be clear, this is not an official SDOT transit map. Not yet anyway.

The map was a long time coming. I made a concept in 2009 that went nowhere until late 2014, when TRU approached me with their ideas of more accessible and easier-to-read transit maps. Encouraged by their support and in collaboration with CHK America where I work, I spent a lot of my free time in 2015 creating a city transit map that I hope is a pleasure to use and look at. There are a number of design features that I would like to highlight. 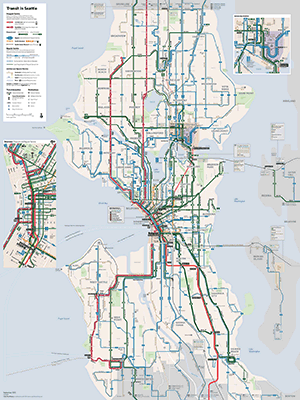 Current best practice for transit maps is to reveal the network’s usefulness to the customer. This often means showing service frequency and span intuitively. The map does so by grouping service into three main categories: frequent all-day service, regular all-day service, and limited service. Line weight and color work together to create a visual hierarchy of service.

The trend of maps I have recently worked on is to design them as a friendly overview of the transit system rather than an overly detailed trip planning tool. In an age of real time arrival and instant super detailed trip planning apps, this makes sense, as those tools are not designed to show the big picture. I want the map to help people discover where transit goes in the city and what parts of the city are accessible by high frequency, high quality transit that they don’t have to think too much before riding. 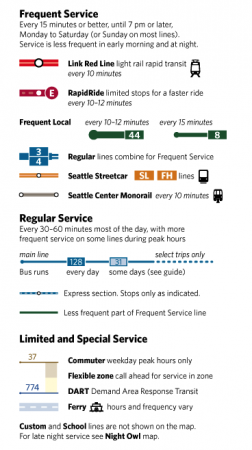 Thick lines represent the frequent network, which I define* as any line with 15 minute frequency (or better) from morning to 7 pm, Monday through Saturday. Routes with 10-12 minute all-day service get an even thicker line. Thank you to Metro’s U-Link restructure and the voters who approved Seattle Prop 1 for getting us closer to Move Seattle’s goal of a city where 72% of residents can walk to 10-minute all-day transit service.

A blue medium-thickness line represents all-day routes which run every 20-60 minutes during the day. Corridors where multiple routes are scheduled together for frequent service combine into a single thick line. A dark route badge indicates the route runs seven days a week, whereas a light route badge indicates a route runs on weekdays only or has no Sunday service. These concepts are borrowed from Washington, DC’s bus system maps and Spokane Transit’s system map, both of which CHK redesigned in 2012 and 2011, respectively.

A coffee colored line represents the peak-only commuter routes. Unlike the frequent and regular routes which have a line for each route to make them easy to trace, the peak routes get a single line per street. Because nearly all these routes are focused on getting people to either downtown or the U District, this should be sufficient. Their limited service hours call for reduced visual emphasis on the map.

The visual weighting follows to the typography as well. Streets and lines with more service get more prominent labels.

*A slight variation on Metro’s definition. I am aware that the suburban routes (except 550) are not frequent on Saturday.

Each Route Its Own Line

As mentioned above, each frequent and regular route gets its own line. This helps the reader trace a route across the city and reduces the occurrence of “shield hunting”, where readers get lost trying to follow a path on the map and have to rely on the route labels (or shields on highway maps) to figure out the route. This is a major shortcoming of my Frequent Transit Map due to the challenge of compressing the entire city on to a letter-size sheet of paper.

Another benefit of separating the lines is being able to show overall level of service on a street. On this map, it is very clear that Aurora, Jackson, Pacific, and Pike/Pine (excerpted below) have ultra-frequent service. 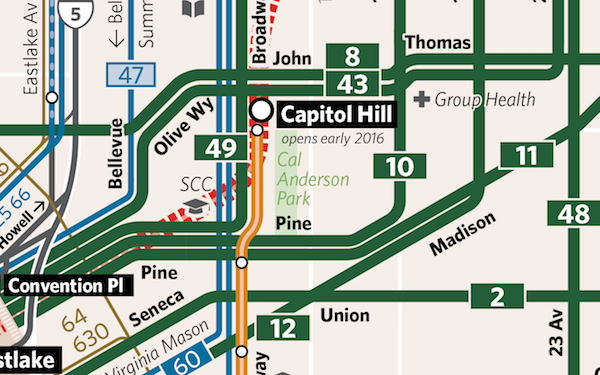 However, there are exceptions. It is impossible and undesirable to show each route running through downtown separately. At one point on Third Avenue there are over two dozen routes. You would have a hard time finding individual routes in all the clutter. It is a similar situation for the freeways where many routes run non-stop for long stretches. I didn’t want to dedicate precious space showing service that you can’t access. Instead, routes are consolidated into fewer lines.

The map attempts to stay true to Seattle’s unique geography while simplifying lines to make them easier to follow and more aesthetically pleasing. Each kink in a line adds to the mental effort a reader needs to process information, called cognitive load. But remove enough kinks and the result would conflict with most people’s mental model of the city, also called “looking wrong”, or distort distances so much to be misleading. It is a delicate balancing act.

The shoreline has been smoothed out; showing every single pier and dock and little cove on a transit map is a distraction. Seattle’s streets are laid out on a grid, so the map embraces it. The map presents an idealized version of it, sticking to a few angles, straightening streets, and aligning streets to the grid for even spacing.

If you open the map on your phone, you can use its GPS to indicate your location on the map to a reasonable degree.

During development of the map, I sampled colors from objects and places that that are symbolic of Seattle and the Northwest. Objects include Puget Sound, smoked salmon, coffee, Rainier cherries, coast rhododendrons, moss, sea otters, and grey skies. It was a fun exercise but not all of them made it to the final map. Try to spot and name the colors that did! I feel it is important that a transit map not just be functional but also reflect the place which it represents.

Future of the Frequent Transit Map

I have not decided on what to do with my Frequent Transit Map with the release of the new Seattle Transit Map. Most of my free time is being spent developing the new map and I do not know whether it is worth keeping the old map up to date. There are several possible directions it could go: it could be updated to the March network, some of the work has already been done; or it could be abandoned in favor of the new map; or it could be redesigned to be a companion to the new map, although it will take some time after the March map is completed. Let me know what you think.

99 Replies to “The Seattle Transit Map and Guide”