UPDATE 1:31pm: The first train will be “approximately noon” on Saturday and service will be free until the Grand Opening. 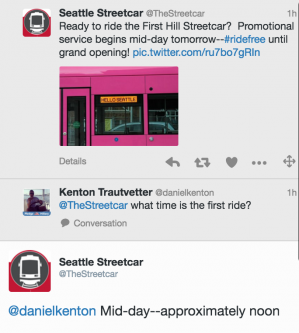 SDOT has officially announced the launch in a media release, and The Stranger and Seattle Times also have more details.  We are still awaiting details on , a published weekday or weekend schedule, and the details of the Grand Opening festivities. From SDOT:

The Seattle Department of Transportation (SDOT) is excited to announce promotional service on the First Hill Streetcar Line will begin midday on Saturday, January 23. This “soft launch” will feature free rides to introduce the new service, and will be followed in the weeks to come by a grand opening and community celebration.

Thank you to the communities, neighbors, and businesses along the line for bearing with us during construction and testing. We appreciate your patience and support. We are excited to see you on the First Hill Streetcar discovering Seattle’s neighborhoods and attractions, commuting to work, and linking to other modes of travel. Learn more about how to ride the streetcar. Stay tuned for details on the grand opening events to follow.

Though less than 24 hours away and with no official word from SDOT, the First Hill Streetcar might, just maybe, launch Saturday morning.

Multiple sources speaking anonymously to STB described a relatively chaotic process behind the scenes, with agency staff unable to confirm as of Thursday if the Saturday launch will proceed. News of a sudden ‘soft launch’ angered community groups who had been planning launch festivities for over a year, prompting an apologetic internal letter on Thursday from SDOT Director Scott Kubly that is still the only evidence of the planned launch. Capitol Hill Seattle obtained a copy of the letter this morning:

I understand that in the past couple of days there might have been confusion caused by news of a soft launch of the First Hill Street Car (FHSC) this coming Saturday. This news might have been confusing because it was unclear whether this soft launch was in lieu of the grand opening celebrations that SDOT had been working with community and neighborhood partners to plan.
I want to clarify that the intent for this coming Saturday is not to replace the celebratory events we want to hold in our neighborhoods, but to ensure that a soft launch of the FHSC is successful and we can ensure that the streetcar is in fact operational. The attached letter articulates SDOT’s commitment to this process and our continued interest in working with our community partners to finally celebrate the successful opening of the FHSC line.

Tomorrow [Friday], SDOT will be contacting the media to announce the soft launch on Saturday. We anticipate this will generate some media attention about the soft launch, but it is our intent to work with you, our community partners, to make sure that the grand opening celebrations are where we concentrate the most media attention.
If you are interested in joining us for the soft launch, your presence and participation will be welcome, but again, I want to reiterate that we are not intending Saturday to be anything other than a soft launch of the FHSC.

Director Kubly will be presenting at the city council’s Sustainability and Transportation committee at 2pm today, and we’ll update this post when more information becomes available.