The Sound Transit Board is now seriously considering a larger package for the next big regional transit expansion, ST3. Our understanding is that the most likely timeline for the finance plan is at least 25 years, up from 15 years. This means at least an 84% increase in funding for North King projects. Considering the increased scope of the package, it’s essential that a Ballard to University District (Ballard/UW) line be included in ST3 – for reasons that go well beyond the line’s end points.

Seattle Subway wrote about Ballard/UW in June of 2014 in response to the first round of ST3 study work. In response Sound Transit improved their station locations, however, their analysis still lowballs the performance of the line by treating it as a standalone segment. Ballard/UW must be looked at both as an extension of Ballard-Downtown and in the context of the transit restructures it could enable. 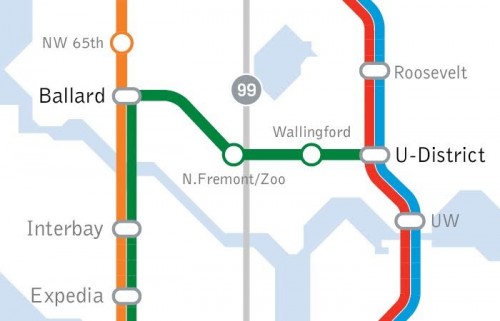 If a Downtown to Ballard line turned east at Market Street and continued to UW, it would have several advantages including:

The importance of the bus transfer for transit users along the Aurora and Greenwood Avenue North corridor cannot be overstated. These areas have high concentrations of people who are transit dependent and adding this fast connection to the regional system will greatly improve the rider experience and reliability for the tens of thousands of E-Line and Route 44 riders.

Ballard/UW has many other advantages that have been well documented on this blog, for example, traveling from Ballard to the University District in 7 minutes across a 3.5 mile stretch that is already one of the most congested corridors in Seattle and one of the least likely to see substantial surface improvements due to severe right of way limitations.

Sound Transit has long assumed ST3 would have lines to Ballard and the West Seattle junction via Downtown Seattle, back before the likely package size was increased by 84%. An increase this large means that both Ballard/UW and an extension from West Seattle Junction to Burien must be included in the ST3 package for the November ballot. The board has the tools it needs to achieve this goal and the city needs both lines.

The region needs the Ballard/UW line to ensure that the positive energy of a broad coalition around ST3 continues. More than 200,000 people live in Seattle Districts 4 and 6 close to a proposed station in the Ballard/UW corridor. Add in improved transit access to the regional system via transfers for a large portion of the 30,700 people who ride the Aurora bridge buses every day and it becomes clear that we can’t leave this line out of ST3.

In short, Ballard/UW votes and gets people excited to make ST3 happen. If you think the Ballard to UW line is essential, as we do, it’s now or never. Speak up or prepare for this essential transit infrastructure to be punted for another generation or more.

Ballard/UW crosses districts represented by ST board member/city councilmember Rob Johnson (Rob.Johnson@Seattle.gov) and city councilmember Mike O’Brien (Mike.Obrien@Seattle.gov), whom we are sure would like to know about their constituents’ support for this extension. Also, EmailTheBoard@SoundTransit.org and let them all know how you feel.

199 Replies to “In a Big ST3 Package, a Ballard-UW Line is Essential”