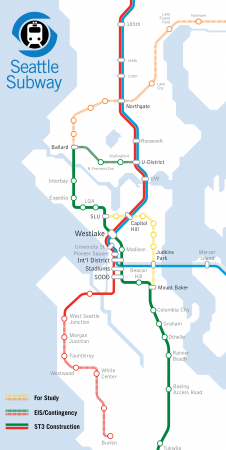 When most Seattleites saw the draft ST3 plan that Sound Transit released on Thursday, they were taken aback. 22 years to get to Ballard with a long section at-grade? 15 years to get to West Seattle? None of the other extensions we need? Seattleites were expecting more out of a $50 Billion dollar regional plan. Upon further review of the draft ST3 plan, however, Seattle Subway believes that we’re really not that far away from a plan Seattleites can get behind.

Here is how to fix it:

1.  Expedite the construction of light rail in Seattle.

The biggest criticism of the proposed package that we’ve heard from Seattle voters and our supporters is the glacial pace of construction to Ballard and West Seattle.  Sound Transit must do everything it can to expedite the construction of light rail in Seattle, including the elimination of projects that do not contribute the same benefits to mobility in Seattle.  The line to Ballard is the single best project in the package, by every possible metric (Ridership per dollar?  Check.  Potential for Transit Oriented Development?  Check.  Potential for federal funding?  Check.).  Seattle voters will not support a package unless they will live to ride the rail.

Once light rail is constructed at-grade, our city will be stuck with a flawed system, forever. Delays from our existing stretch of at-grade rail ripple throughout the system and limit the future  capacity of rail through the Rainier Valley.  All new light rail must be constructed with grade separation. This line, in particular, needs to be built to the highest quality possible. The high range ridership estimate for Ballard to downtown is 145,000 riders per day, which would mean:
-Ballard to Downtown’s daily ridership will be greater than the entire population of Bellevue.
-Ballard to Downtown’s daily ridership will be equivalent to the entire Portland MAX system.

3.  Provide complete funding of an Environmental Impact Statement (EIS) for the extensions from Ballard to UW and from West Seattle to Burien, and add both lines as “provisional projects” if additional funding becomes available.

Completing the EIS for the extensions from Ballard to UW and from West Seattle to Burien will deliver those projects six years faster once funding becomes available.  That makes the lines closer to “shovel ready,” and creates the possibility that they can be built in ST3 if additional revenue becomes available through federal grants or cost savings on other projects. Just this year alone, Sound Transit is $240M under budget on projects under construction, and the agency will also receive $600M in unexpected federal grants.  Seattle needs a plan that will leverage the benefits from Sound Transit’s continued success.

Though this is very likely the last time Sound Transit will use the regional funding mechanism applied to ST3, Seattle’s need for high quality transit will not stop when these projects are done. We need to think long term and start the planning that is necessary for a future local measure, new Sound Transit funding mechanisms, or state/federal funding opportunities.  Sound Transit must study additional lines in Seattle, including the “Metro 8” from Belltown to Mt. Baker via South Lake Union, the Central District, and Judkins Park and an extension from Ballard to Bothell via Greenwood and Lake City.

The agency believes opening the 130th Street station before the completion of ST2 would alter its application for federal funding, forfeiting federal funding that has already been awarded.  That said, there is no reason not to fund the station through ST3, so that construction can begin immediately after ST2 is completed.  Seattle is already planning to upzone the 130th Street area, and this station will be a critical connection to Lake City.  Funding the 130th Street station is the only way to extend our rail system to serve that urban hub.

As a final point, the estimates used to determine these project schedules need to be realistic, rather than so pessimistic that they can’t be missed.

ST3 serves no one if it doesn’t pass. To obtain approval from a majority of voters throughout the Sound Transit district, it’s expected that the measure will need to win support from over 65% of Seattle voters.  The draft plan presented by Sound Transit would fall far short of winning this support, but could be turned around with the changes we suggest.  Seattle voters will enthusiastically support a measure that includes the right projects – our need for high quality transit solutions cannot be overstated.

If you agree with Seattle Subway on these points, there is still time to make major changes to the draft plan.

Let Sound Transit know what you think of the draft plan by responding to their ST3 survey.