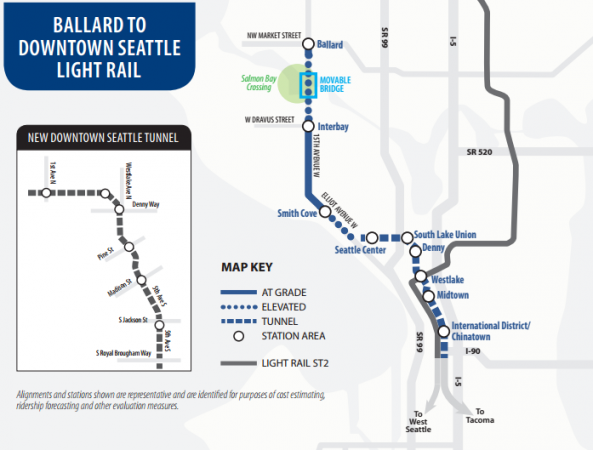 Across the region, everyone is talking about how long Sound Transit 3 projects are going to take, and there is no shortage of opinions about what the sources of delay are.

As it stands, the 7.1-mile segment from Ballard to Chinatown/International District, including 9 stations and a tunnel from Mercer Street south, would cost between $4.5 and $4.8 billion and arrive in 2038, or 22 years after the vote. It would attract an eye-popping 114,000-145,000 boardings per day, although “only” 60-74,000 riders would use the genuinely new service area north of Westlake.

So what takes 22 years? Sound Transit’s plan allows six years for the Environmental Impact Statement (EIS); five for final design, permitting, and Right of Way (ROW) acquisition; and 11 years for construction, including roughly two years for post-construction testing and float.

There is scope, in theory, to accelerate that timeline. 11 years of planning is conservative. For example, Lynnwood Link’s EIS started in 2011 and they expect to break ground in 2018. Sound Transit executive Ric Ilgenfrtitz noted that the length of this period “depends on the quality of collaboration between us, the City of Seattle, and the FTA [Federal Transit Administration].” He cited Lynnwood of an example of excellent collaboration, so consider that a floor for the potential length of these phases.

However, eliminating the four-year delay in planning requires not only a cooperative attitude from the City, but also a change in the financing plan. As money comes in, it shifts between subareas to focus on the projects currently underway, although the sums come close to matching subarea revenues over the life of the package. At the moment, Ballard and Downtown fall somewhere in the middle, ahead of Issaquah and Everett and behind Tacoma and West Seattle.

11 years is a longer construction period than previous ST projects. It’s hard to say at this point that there’s any fat to cut, because 11 years is believable given the scale of the project. The new tunnel will have more underground stations (6) than ST will have constructed by 2023 (5). Moreover, two of these stations (Westlake and 99/Harrison) will have to be mined, like Beacon Hill, because they will pass under key infrastructure that blocks cut-and-cover construction. The U-Link tunnel is a bit shorter (3.5 miles vs. 3.15 miles), has four fewer stations, and took seven years (2009-2016) to complete while famously being ahead of schedule.

So: Ballard/Downtown is projected to open in 22 years. It could be 18 under two conditions: that the planning and preparation phases go smoothly, and we reach a regional consensus to prioritize it in the funding plan.