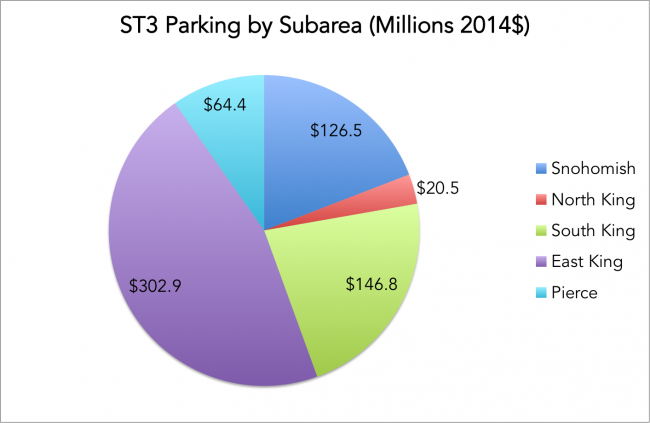 The Sound Transit 3 Draft Plan includes a lot of parking. Just how much? The agency plans to build 9,700 new stalls (8,300 net) in 16 new parking garages and two new surface lots. The total cost is $661m in 2014 dollars, or a staggering $80,000 per space. Taken in aggregate, each commuter using these new stalls could park every day for 50 years, and Sound Transit would pay them $4.38 for the privilege (and that’s on top of the capital costs of their bus or train ride, of course). If 2041 ridership attains its expected 500,000 per day and each of those 8,300 new stalls were filled daily, that’s just 1.6% of the system’s users.

We’ve been fairly hostile to Park & Rides on these pages over the years, and mostly with good reason. Parking adjacent to transit directly reduces all other means of access, reduces affordable housing potential, necessitates hostile adjacent land uses, increases transit operating costs, reinforces residential auto dependency, and (when unpriced) represents an exorbitant subsidy that the relatively wealthy enjoy at the expense of others’ access.

To my mind, there are two good rebuttals in favor of Park & Rides. The first is on social justice grounds, namely that the suburbanization of poverty displaces persons to locations with anemic local transit, forcing vehicle ownership upon them and necessitating that they access high capacity transit by car. Pricing parking can help lessen the subsidy for wealthy parkers –and it’s reassuring that the ST Board and CEO Rogoff seem comfortable with the idea – but it also competitively prices out those who have no other options. The second argument stipulates that as a transitional land use easily torn down later, Park & Rides facilitate lifestyle change while car-dependent locales await the retrofits necessary to make them succeed without cars. Whether you think that’s true largely depends on your time horizon, and on the relative value you place on access for a few today versus access for far more people later.

But not all Park & Rides are alike. Some of Sound Transit’s ST3 parking plans are reasonable investments in overcrowded facilities, others seem like pure political pork, and most are somewhere in between. Let’s break them down one by one.

By now most observers recognize Snohomish County’s central dilemma: they are short on funds and long on projects. Building their preference (Everett via Paine Field) in the near-term just isn’t possible without massive subarea transfers, and I suspect that deep down they know it. So every dollar spent on parking is a dollar lost to actual transit, and Snohomish needs to be looking to cut costs if it has any hope of expediting its projects. Snohomish County’s ST3 parking tab would be $127m, including:

$127m may not sound like much, but it’s one-third to one-half the difference between SR 99 alignment and a Paine Field alignment. And while there may be good arguments for terminus station parking at places like Everett Station, the proposed additions to Sounder North parking are much less defensible. Both Mukilteo and Edmonds are roughly 80% of capacity today – Mukilteo fills just 50 of its 65 spaces daily – yet ST3 proposes to quintuple Mukilteo’s total parking to 300 stalls despite no plans to add more trains. Unless you think parking provision is the limiting factor to Sounder North’s growth – hah! – the parking proposed at Edmonds and Mukilteo is simply a waste of $37m.

North King has just $20m in parking in the ST3 Draft Plan, with a 300-stall garage proposed for Lake Forest Park along SR 522 BRT.

The polar opposite of Snohomish, East King is long on funds and short on projects, so it would be slated to get 46% of ST3’s parking dollars, for a total of over $300m. This would include:

South King’s parking proposals are painful for those of us who fought (and lost) the battle for an SR 99 alignment for Federal Way Link. When the preferred alignment was chosen, several Boardmembers (Mike O’Brien, Larry Phillips, and Joe McDermott) lamented the TOD impacts of the freeway choice, with McDermott specifically asking the Board to look at improving non-motorized access to the most remote station, Star Lake/272nd.

It appears those appeals have fallen on deaf ears. Though the current Star Lake lot (500 stalls) is barely half-full, and though downtown Federal Way consists nearly entirely of parking already, the parking proposed for South King is massive, and directly contradicts non-vehicular access goals. Rob Johnson’s call for Sound Transit to lease adjacent lots prior to building new parking is perhaps nowhere more appropriate than Federal Way. And yet:

Thankfully, no new parking is proposed at the Tacoma Dome, despite the proposed additions of both Amtrak and Link. Pierce County’s parking proposals include:

South Federal Way (which I chose to ‘bill’ to Pierce) is perhaps the most disappointing among these, with 500 new stalls despite the current 500 stall lot being 70% empty.

To conclude, in each of these cases it’s worth looking at the opportunity costs of providing such a high level of parking. What could $661m buy besides expensive car storage? Here are a few ideas: