When Move Seattle passed last November 3, the mood was jubilant. An expected nailbiter became a comfortable 17-point victory, with the beers flowing at the election night party at the Belltown Pub hastily morphing from a hedge against disappointment to the fuel of celebration. The city had put the War on Cars before voters and won, marking a fundamental shift toward safe streets, a complete bike network, and transit priority in our city.

Urban cycling’s long existential crisis in Seattle is over. Bike lanes and safe streets are a core piece of our city and our politics. Putting walking, biking and transit first is mainstream policy now, and we have serious funding to back it up.

Since the vote, there have been a series of disappointments. Within a week of Move Seattle passing, the concept design for Madison BRT announced the deletion of transit priority east of 18th Avenue, leading yours truly and others to worry more broadly about Move Seattle’s “Rapid Ride Plus” corridors.  On November 16, the city, Metro, Sound Transit, and the Downtown Seattle Association announced a new $1.5m “Center City Mobility Plan” (CCMP) that probably should have been made public before the vote. On account of the CCMP, bike advocates have been told that all Downtown bike lanes have been put on hold until 2019 or later, and to put it mildly, they’re not happy.* The CCMP will:

(Establish) a transportation vision for 2035…(and) create a near-term transit operations and transportation management plan by mid-2016 along with a public realm plan for enhancing the right of way to better serve residents, employees, shoppers and visitors.

Image: Seattle Bike Blog
Part of the impetus for the CCMP was revealed 4 days later on November 19, when Metro announced its bargain price sale of Convention Place to the Washington State Convention Center, leading to the closure of Convention Place Station once construction begins and the end of joint bus/rail tunnel operations as early as 2019. By definitively planning for the end of joint operations, the CCMP will do what (amazingly) no plan has done before, including the Downtown Access Strategy, Access Seattle, Downtown Seattle Transit Coordination, Downtown Transit Capacity White Paper, and the Center City Circulation section of Seattle’s Transit Master Plan. That’s just from the past 3 years. So you can understand the ruffled feathers when officials wait until after a yes vote to say “we need to delay projects pending further study.”

Then there are the seemingly crossed wires of communication. In late October, Mayor Murray stood at Graham Street and said, “I will guarantee it [will be built]. I’ve shown in my time in the legislature that we can deliver transportation projects as we say to the voters we will deliver them.” Yet on March 24, the Sound Transit Draft Plan proposed Graham Street coming on line in 2036, a decade after Move Seattle would expire, negating its nominal $10m contribution.

In March, Councilmember Mike O’Brien added a proviso to the Pronto buyout that mandated that select protected bike lanes be built prior to any Pronto expansion, just weeks before SDOT announced the 1-2 year delay of those same bike lanes.  The reasons for the delay are twofold: the putative need to complete the CCMP, and SDOT’s miscalculation of costs. According to a staff presentation to the Transportation Committee last week, SDOT had used a nice round number of $1m/mile in its calculation of lane-miles to be built with Move Seattle funds, but now says it has underestimated by 30% ($1.3m/mile).

The bait-and-switch many are feeling is legitimate, as the campaign for the vote was one of enthusiasm, commitment, and possibility, while the reality has been considerably more pedestrian.

On the other hand, though it stings when our favored projects are cut or restructured, it’s important to remember that this variability was baked into Move Seattle from the start. The Seattle Times used this “slush fund” criticism in its anti-levy editorial:

Because Move Seattle’s plan is so vague — the suggested projects are contained in a non-binding addendum to the ordinance — there’s a risk funds could be siphoned off to pay for mistakes and overruns on current projects.

But Martin also had a great piece on why “slush funds” are a feature not a bug, and I suggest re-reading the whole thing, as it’s now more relevant than ever:

To actually construct a measure that would neutralize this talking point, Seattle would have to write a package that literally could not adjust to changing conditions. If a federal grant were available but we had to provide matching funds — multiplying the return per dollar — or if growth skyrocketed along one particular corridor, SDOT could do nothing about it. It would be an idiotic way to run the city.

This is all part of a disturbing trend in local politics. Voters tightly constrict the expenditure of any block of revenue, limit the growth of the general fund, and then complain that worthwhile projects require special levies.

SDOT’s Norm Mah was refreshingly frank about this when he told Next City’s Josh Cohen:

“The 2015 plan reflects unstudied but [Bicycle Master Plan] prioritized corridors in CC from 2015 to 2019…Based on the evolving nature of the center city, SDOT did not make a commitment to having all the [Center City Bike Network] construction complete by 2020.”

But despite the cataloging of errors above, and the failures of communication from agencies to the public and between agencies themselves, process critiques should have less force than technical ones. As this is a transit blog, let’s try to answer the question of whether or not the main contention is legitimate. Do Downtown bike lanes need to wait or be deferred on bus capacity grounds?

First, some data. My unofficial calculations show 5,514 daily transit trips on 2nd, 3rd, 4th, 5th Avenues plus the Downtown Seattle Transit Tunnel (DSTT). The tunnel buses in question account for 826 of these trips, and surfacing them would be an 18.7% increase in surface trips. Significant, but not catastrophic. 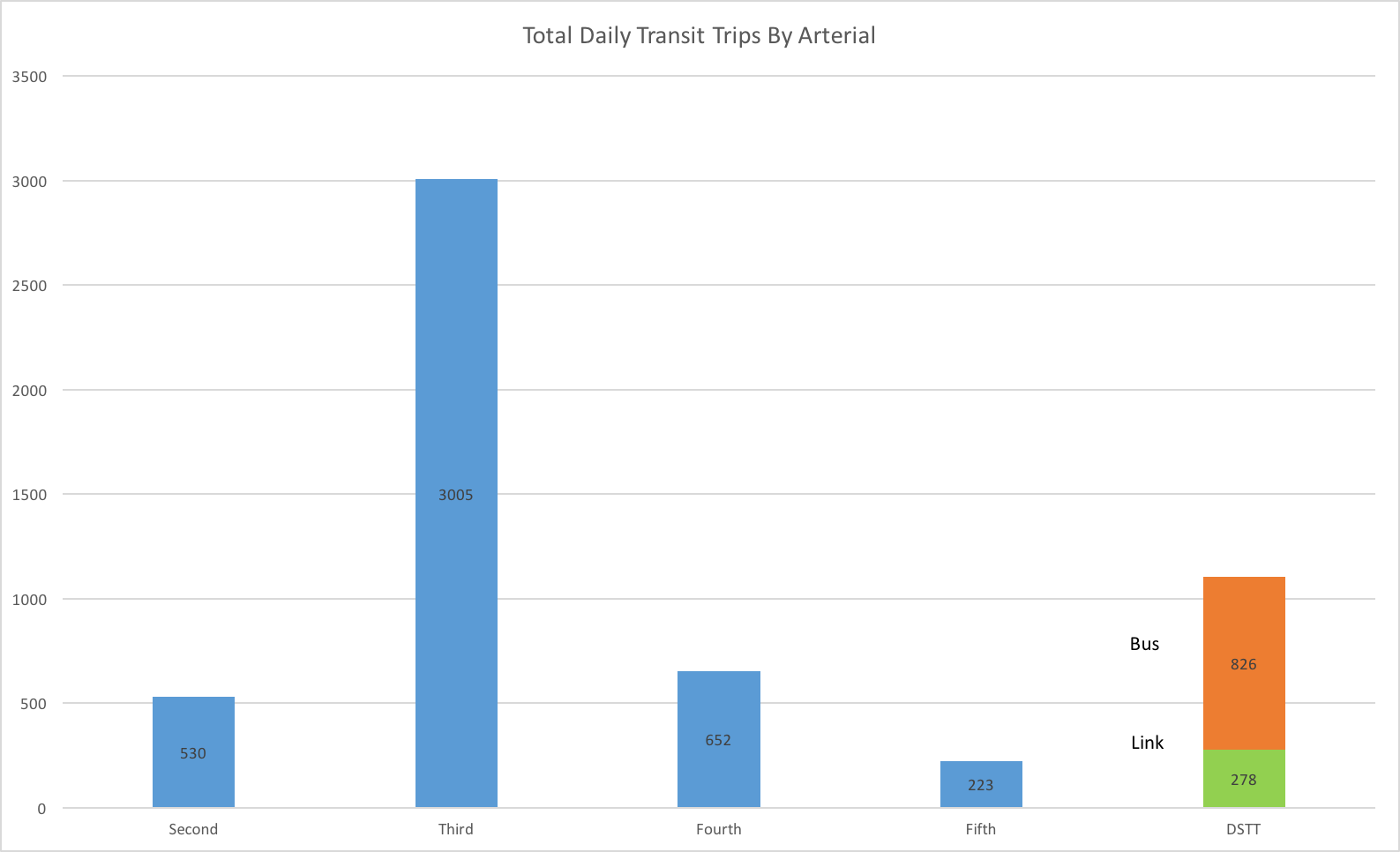 Next, if you look at the daily transit traffic on each arterial and the DSTT, you see the all-day workhorses of 3rd Avenue + the DSTT, and the much more peak-oriented nature of 2nd, 4th, and 5th. It seems intuitively clear that 2nd/4th/5th could handle the off-peak 41, 101, 106, 150, 255, and 550 without much trouble, but the question is really about peak of peak when pressures are greatest. So how can we balance the needs of bikes transit between 2018-2023? Here are a few ideas: 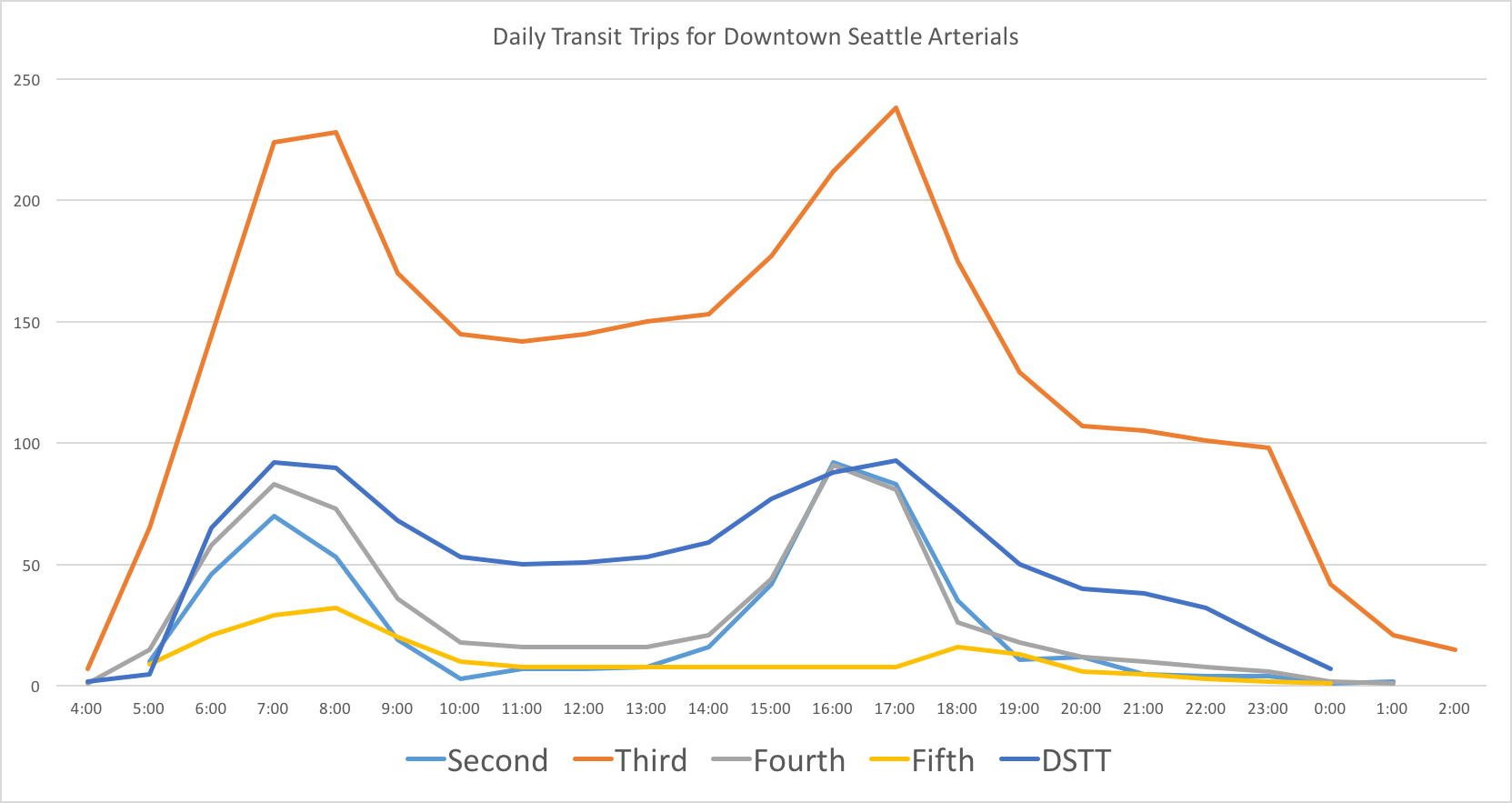 Give 5th Avenue a full time BAT lane. In the chart above, 5th Avenue in particular stands out for its lack of use, and it also lacks any transit priority between Pine and Columbia. As (hopefully) cars will no longer need to access Columbia Street to get onto the Viaduct after 2018, placing a right-side bus lane wouldn’t unnecessarily burden general traffic.

Extend the 4th Avenue bus lane from Pike to Olive. This would create continuous transit priority from Jackson to Olive.

Remove remaining on-street parking from 4th Avenue between Spring and Pike, and build a buffered bike lane. Between Washington and Spring there is already a paint-only bike lane, between Spring and Pike the bike lane is replaced by parking, and between Pike and Olive the lane reverts to general traffic. By removing the parking and pushing cars to underused nearby garages, we can build a quality bike lane on 4th Avenue now without impacting transit or general traffic.

Consider truncating all Sodo Busway routes at Stadium and run turnback Link trains. When the Convention Place sale was announced, Sound Transit’s Bruce Gray confirmed that Sound Transit has the ability to run turnback trains between UW and Stadium:

Gray noted that although the new light rail vehicles (LRVs) won’t begin arriving until 2020, ST retains some operational flexibility with their current fleet that could potentially add tunnel service in the event that buses need to vacate in 2019. He noted that a rail-only tunnel will be up to 40% faster between UW and International District Station (IDS), with running times between UW and IDS potentially reduced from 15 minutes to 9 minutes. Those time savings would go a long way toward purchasing the service hours needed to operate the turnback trains. With even headways between them, this could mean combined core service every 3 minutes during peak and every 5 minutes off peak, with current 6 minute peak and 10 minute off-peak service south of Stadium.

If each of these suggestions were implemented, there would be very little added pressure on downtown arterials, the extra Link trains would serve what would otherwise be wasted tunnel capacity, and the Center City Bike Network could also proceed apace. But these are all great questions for the CCMP to answer, and the solutions aren’t necessarily obvious or without tradeoffs. So we should cut agencies slack for needing to get this right.

But we should also all be clear that the future of Downtown Seattle is one of fewer single-occupancy vehicles, fewer buses, less (or no) street parking, more bikes, more people, and more underground trains. Metro’s 2040 vision in its recent Long Range Plan shows only 8 routes remaining on 3rd Avenue, and Link extensions to Northgate, Lynnwood, and Redmond will obviously reduce peak bus volumes further.  The city will be safer, more civilized, quieter, and denser, and the Center City Bike Network is a huge piece of making that happen. Transit and bikes should work together for each others’ mutual advantage in the years ahead.

*Disclaimer: I own a bike rental business with a vested interest in building Downtown’s bike network.

54 Replies to “The Center City Mobility Plan: Sensible Study or a Process Punt?”